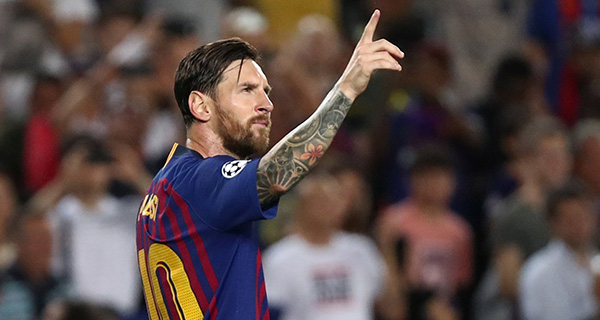 Four years have passed since Lionel Messi last reached a Champions League semi-final and his drought has become a source of unease for Barcelona ahead of their latest attempt on Tuesday.
Manchester United are the ones looking to emulate Atletico Madrid, Juventus and Roma by sending Barca out in the quarters for a fourth year running but for the Catalans, another failure would be unforgivable, not least because of the implications for their captain.

“Last season we did the double but we all felt bad about how it went in the Champions League,” Messi said in August. “We promise this season we will do all we can to bring that beautiful cup back to Camp Nou.”Barcelona’s dominance in Spain has been shaped by Messi, who only this month overtook Iker Casillas as the player with the most La Liga victories, 335, in its history.

Those wins have helped them capture seven of the last 10 league titles, a figure that will surely become eight from 11 next month, given their nine-point lead at the top of the table.

There could be an historic fifth consecutive Copa del Rey too if Ernesto Valverde’s side beat Valencia on May 25.

But in Europe, Barca would appear under-marked, with only one success in the last seven years, three in 10 since Pep Guardiola took charge in 2008 and set in motion what has felt, in playing terms at least, like an iconic era.

The list of clubs etched onto the cup hoisted at the Wanda Metropolitano on June 1 will instead show a decade swallowed up by Real Madrid, whose domestic failings in that period have been exonerated by four Champions League triumphs in five years.

“Obviously it’s infuriating,” Luis Suarez said. “Madrid have made history and it’s a thorn in our side.”

Messi’s record is similarly unbalanced. He has nine La Liga titles and is by a distance the competition’s top scorer, with an astonishing 414 goals. Cristiano Ronaldo, closest in second, has 311.

But in the Champions League, Messi has lifted the trophy four times, a relatively modest return given it puts him on a par with 11 current Real Madrid players alone, including Nacho, Casemiro and Dani Carvajal. This year, Ronaldo is hunting his sixth.

And while Messi dwarfs the Portuguese for goals in La Liga, the opposite is true in Europe, where Ronaldo has 125 goals to his 108.

The game’s most illustrious pair could yet meet in this year’s final, should Barca capitalise on their 1-0 first-leg win over United and then overcome either Liverpool or Porto in the semis.

Ronaldo and Juventus, meanwhile, would have to beat Ajax, and then either Manchester City or Tottenham.

A showdown in Madrid would throw an even brighter glare on Messi’s record compared to Ronaldo, whose sensational hat-trick against Atletico Madrid last month only enhanced the sense this tournament belongs to him.

Messi is not one to complain, particularly given he cannot be blameless in Barca’s underachievements in Europe.

But the fans are frustrated, with last season’s double doing little to ease the disappointment of the collapse against Roma.

And his teammates feel it too, the weight of history on their shoulders from a need to square arguably the game’s greatest ever player with a Champions League haul that befits that status.

“It is an important trophy,” Suarez said after following up the league title by winning the Copa del Rey last season. “But this does not hide what happened in Rome.”

It means the pressure on Barcelona in this competition runs deep, a psychological burden that perhaps United, or their next opponents, will use to their advantage. For Messi, there is work to do.