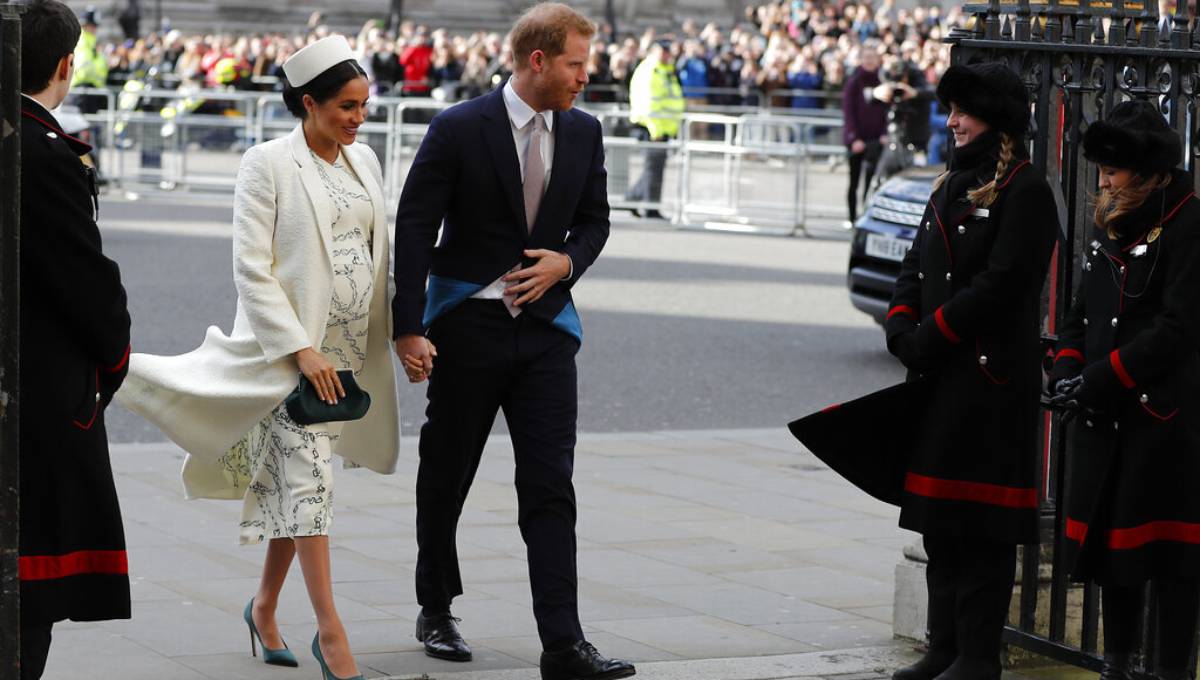 Photo: Britain’s Prince Harry and Meghan the Duchess of Sussex arrive to attend the Commonwealth Service at Westminster Abbey on Commonwealth Day in London.

London, Apr 14 : Prince Harry and Meghan, the Duchess of Sussex, may be keeping plans about their impending baby under wraps, but that hasn’t stopped everyone in Britain from trying to guess the gender and the name of their first child.

If Britain’s bookmakers are to be believed, it’s definitely a girl — and Diana may well be one of her many names.

The William Hill agency closed the betting on the baby’s gender a few days ago after an “avalanche” of bets poured in from people convinced the royal couple is having a girl.

“The secret’s out, as far as we’re concerned,” firm spokesman Rupert Adams said. “It could be because someone somewhere has seen the scan, or someone has heard something.”

While Adams acknowledged there’s always a chance the surge was based on nothing, he said average betting patterns over the years suggest there’s usually some truth in rumors.

So far, Diana is topping the bookmakers’ list as a front-running name — William Hill has put the odds at 4/1. Victoria, Alice, Grace and Elizabeth are close behind, while Albert, Arthur and James are popular guesses for a boy.

“A ridiculous number — 80% of bets taken — are for the name Diana,” Adams said. He said he personally doubts Harry would choose a name that so directly evokes his iconic mother’s tragic death in 1997 but added: “There’s every chance of it being a middle name.”

Carolyn Harris, a royal historian who teaches at the University of Toronto’s School of Continuing Studies, agrees that Diana could be a middle name. That’s what Harry’s brother, Prince William, and his wife Kate did for their daughter, Princess Charlotte (the 3-year-old’s full name is Charlotte Elizabeth Diana).

“The choice of Diana as a first name would place a lot of pressure on the royal baby, as the press would constantly compare her to her famous grandmother,” she said.

Harris believes Harry and Meghan may adopt a similar approach to the naming of other recently born royal children lower down the line of succession: Choosing a moniker that’s traditional, but one that doesn’t frequently appear within the royal family.

She also thinks a possible middle name could be Ruth — after one of Meghan’s great-grandmothers, as well as Diana’s maternal grandmother, Lady Ruth Fermoy.

Some observers speculate that Meghan, who has long spoken out about women’s rights, could go for a name that evokes strong women in history — a theory Harris thinks has substance.

“A name associated with prominent female historical figures in Britain and/or the United States is certainly a possibility,” she said. Eleanor, for one, could honor both Eleanor Roosevelt and Eleanor of Aquitaine, queen of England in the 12th century.

Harry and Meghan haven’t announced the baby’s gender or the due date, which is widely believed to be sometime in late April.

The pair declared Thursday they are keeping the birth private and won’t be sharing news about the baby’s arrival until they’ve told family and friends. That has led many to jump to the conclusion that they are planning a home birth at their new residence, Frogmore Cottage, close to Windsor Castle outside of London.

Home birth or not, the scenario will be quite different from the media circus that lasted for days outside the London hospital where their sister-in-law Kate’s three children were born. That will significantly dampen the name and gender betting frenzy, according to William Hill, which reported taking “hundreds of bets a minute” every time palace officials announced that Kate had gone into labor.

Whatever name they choose, the new baby will not automatically have the official title of prince or princess. Those titles were given to all three children of William, the eldest son of Prince Charles, heir to the British throne.

Instead, Harry and Meghan’s baby is expected to be styled the Earl of Dumbarton if a boy and Lady Mountbatten-Windsor if a girl. That said, the child’s great-grandmother, Queen Elizabeth II, could change that if she wants the baby to be a prince or princess.

Harry’s first child will be seventh in line for the throne, bumping down Harry’s uncle, Prince Andrew.

Some punters have been having a laugh with their royal baby bets. Ladbrokes reported that 2 pounds ($2.60) have been staked on the name Brexit — with odds of 500/1. The name Donald is at 250/1. Meghan, as any reader of British tabloids knows, is no fan of the current U.S. president.

One thing British betting agencies are not seeing: lots of money being placed on quirky, New Age or celebrity-driven, unique monikers.

“Harry is a traditional guy at heart, we think he would like a relatively traditional but not absolutely turgid royal name,” Adams said.

“(Meghan) would like to convey herself as regal — we feel she would not go with a weird name like ‘Sunshine,'” he added.