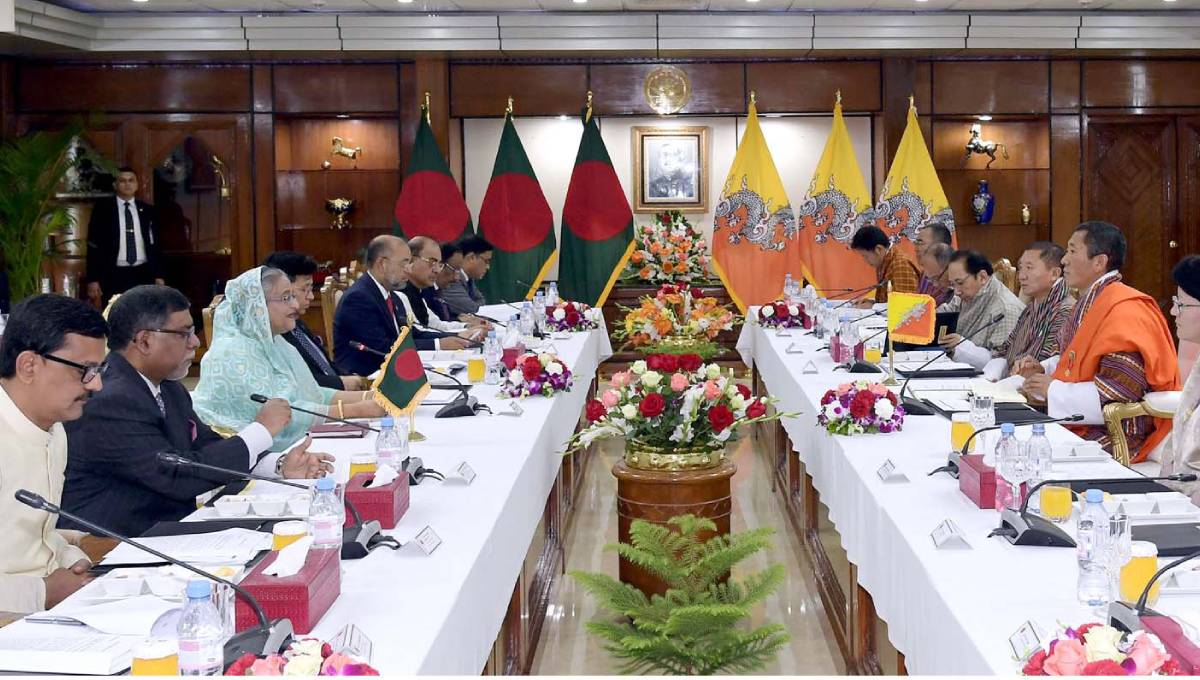 Photo: Bangladesh and Bhutan agree in principle to work on duty- and quota-free access of a number of goods of the two counties to each other’s market for mutual benefits on Saturday, Apr 13, 2019.

Dhaka, Apr 13 : Bangladesh and Bhutan on Saturday agreed in principle to work on duty- and quota-free access of a number of goods of the two counties to each other’s market for mutual benefits.

The issue was discussed at the official bilateral meeting held between Prime Minister Sheikh Hasina and her Bhutanese counterpart Dr Lotay Tshering.

Bhutan sought duty- and quota-free access of 16 products, while Bangladesh sought that of its 10 items, said Foreign Senior Secretary M Shahidul Haque while briefing reporters after the meeting at the Prime Minister’s Office.

“There were positive discussions on it (the duty- and quota-free access of Bhutanese goods) at the meeting. Our Prime Minister said the duty-and quota-free access of our 10 products will be negotiated. Now, we assume both sides have agreed in principle on it. Now, it has to be worked out at the technical level,” the Foreign Secretary added.

At the hour-long official meeting, Sheikh Hasina led the Bangladesh team, while Dr Lotay Tshering the Bhutanese side.

Bangladesh has a historical relation with Bhutan as it was the first country to recognise Bangladesh as an independent country on December 6 in 1971, he said.

Over the years, this relationship has developed from strength to strength, the Foreign Secretary said adding that the trade figures and people-to-people contact in tourism sector of the two countries have increased, particularly after Prime Minister Sheikh Hasina’s visit to Bhutan (in 2017).

Though all the countries signed the BBIN initiative, Bhutan is yet to place any proposal to ratify the initiative of sub-regional connectivity in South Asia.

At the bilateral talks, it was said the new Bhutanese government will place a fresh bill in their upper house of parliament in this regard. “They’re very optimistic about it,” the Foreign Secretary said.

He said Bhutan also showed interest to hire Bangladeshi specialist doctors to meet up demand of such physicians to improve its health sector.

In this connection, the Prime Minister said she will personally look into the matter.

Pointing out that the cooperation between the two countries in the field of health sector is increasing, the Foreign Secretary said the number of seats for Bhutanese students in Bangladesh medical and nursing colleges have risen to 15 from 10 ones.

He said the two sides discussed the regional electricity trade.

Haque said discussions are underway to produce hydropower in Bhutan and marketing that in the region.

The Prime Minister mentioned that Bangladesh is going to invest in hydroelectricity in Bhutan. “The discussion is at the advanced stage, and we hope an agreement to this end will be signed soon,” Haque said.

The Foreign Secretary said there will be trilateral cooperation, and if hydroelectricity is produced in Bhutan, it will be marketed in India and Bangladesh.

Mentioning the significant role of Prime Minister Sheikh Hasina for the development of this region, Dr Lotay Tshering said Bhutan has deep respect in her leadership.

About autism awareness campaign, the Bhutanese Prime Minister noted that Saima Wazed Hossain, the daughter of Prime Minister Sheikh Hasina, has made huge contributions to it, the Foreign Secretary said.