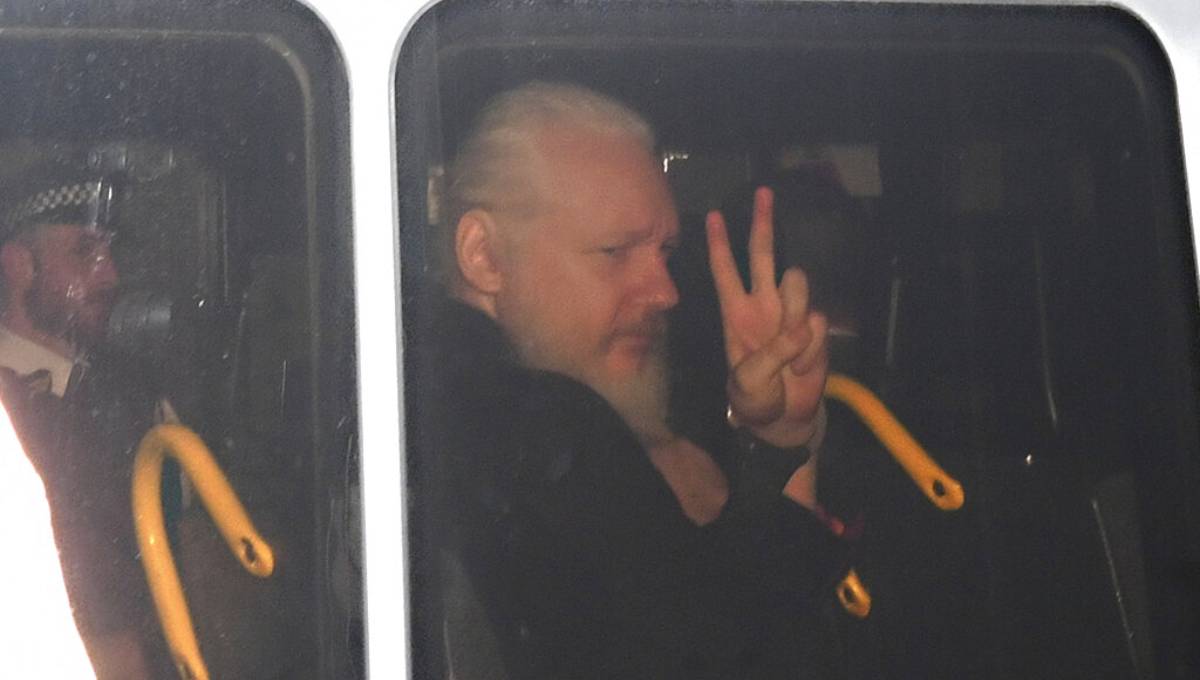 Photo: Julian Assange gestures as he arrives at Westminster Magistrates’ Court in London, after the WikiLeaks founder was arrested by officers from the Metropolitan Police and taken into custody Thursday April 11, 2019. Police in London arrested WikiLeaks founder Assange at the Ecuadorean embassy Thursday, April 11, 2019 for failing to surrender to the court in 2012, shortly after the South American nation revoked his asylum .

London, Apr 12 : British police on Thursday hauled a bearded and shouting Julian Assange from the Ecuadorian Embassy where he was holed up for nearly seven years, and the U.S. charged the WikiLeaks founder with conspiring with former Army intelligence analyst Chelsea Manning to get their hands on government secrets.

Police arrested Assange after the South American nation revoked the political asylum that had protected him in the embassy, and he was brought before a British court — the first step in an extradition battle that he has vowed to fight.

Ecuador’s President Lenin Moreno said he decided to evict the 47-year-old Assange from the embassy after “repeated violations to international conventions and daily-life protocols,” and he later lashed out at him during a speech in Quito, calling the Australian native a “spoiled brat” who treated his hosts with disrespect.

In Washington, the U.S. Justice Department accused Assange of conspiring with Manning to break into a classified government computer at the Pentagon. The charge was announced after Assange was taken into custody.

Assange took refuge in the embassy in 2012 after he was released on bail in Britain while facing extradition to Sweden on sexual assault allegations that have since been dropped. He refused to leave the embassy, fearing arrest and extradition to the U.S. for publishing classified military and diplomatic cables through WikiLeaks.

Manning, who served several years in prison for leaking troves of classified documents before her sentence was commuted by then-President Barack Obama, is again in custody in Alexandria, Virginia, for refusing to testify before a grand jury investigating WikiLeaks. Manning’s legal team said the indictment against Assange showed prosecutors didn’t need her testimony and called for her to be released, saying her continued detention would be “purely punitive.”

Over the years, Assange used Ecuador’s embassy as a platform to keep his name before the public, frequently making appearances on its tiny balcony, posing for pictures and reading statements. Even his cat became famous.

But his presence was an embarrassment to U.K. authorities, who for years kept a police presence around the clock outside the embassy, costing taxpayers millions in police overtime. Such surveillance was removed in 2015, but the embassy remained a focal point for his activities.

Video posted online by Ruptly, a news service of Russia Today, showed several men in suits pulling a handcuffed Assange out of the embassy and loading him into a police van while uniformed British police formed a passageway. Assange, who shouted and gestured as he was removed, sported a full beard and slicked-back gray hair.

He later appeared in Westminster Magistrates’ Court, where District Judge Michael Snow wasted no time in finding him guilty of breaching his bail conditions, flatly rejecting his assertion that he had not had a fair hearing and a reasonable excuse for not appearing.

“Mr. Assange’s behavior is that of a narcissist who cannot get beyond his own selfish interests,” Snow said. “He hasn’t come close to establishing ‘reasonable excuse.'”

Assange waved to the packed public gallery as he was taken to the cells. His next appearance was set for May 2 via prison video-link in relation to the extradition case.

Assange’s attorney, Jennifer Robinson, said he will fight any extradition to the U.S.

Asked at the White House about the arrest, President Donald Trump declared , “It’s not my thing,” and “I know nothing about WikiLeaks,” despite praising the anti-secrecy organization dozens of times during his 2016 campaign.

Assange has been under U.S. Justice Department scrutiny for years for WikiLeaks’ role in publishing government secrets. He was an important figure in special counsel Robert Mueller’s Russia probe as investigators examined how WikiLeaks obtained emails that were stolen from Hillary Clinton’s presidential campaign and Democratic groups.

“The bottom line is that he has to answer for what he has done,” Clinton said later Thursday, at a speaking event with husband Bill Clinton.

“Powerful actors, including CIA, are engaged in a sophisticated effort to de-humanise, de-legitimize and imprison him,” the group said in a tweet over a photo of Assange’s smiling face.

But in Assange’s native Australia, Prime Minister Scott Morrison told Australian Broadcasting Corp. he had no plans to intervene in the case as the charge was a “matter for the United States” and had nothing to do with Australia.

Ecuadorian officials suggested Assange’s own behavior was to blame.

Interior Minister Maria Paula Romo said Assange’s mental and physical health worsened while he was holed up, and he began to act aggressively toward his hosts, including smearing feces on the walls of the embassy.

In a fiery speech in Ecuador, Moreno called him an ungrateful and “miserable hacker” who treated embassy officials poorly.

“When you’re given shelter, cared for and provided food, you don’t denounce the owner of the house,” Moreno said to applause at an event outside Quito.

“From now on we’ll be more careful in giving asylum to people who are really worth it and not miserable hackers whose only goal is to destabilize governments,” he added.  “We are tolerant, calm people, but we’re not stupid.”

Other Ecuadorian officials in Quito accused supporters of WikiLeaks and two Russian hackers of trying to destabilize the country as the standoff with Assange intensified recently.

Romo said a close collaborator of WikiLeaks had traveled with former Foreign Minister Ricardo Patino this year to several countries — including Peru, Spain and Venezuela — to try to undermine the Ecuadorian government. She also said a person close to Assange had been detained at Quito’s airport trying to fly to Japan. The person, who she did not identify, is accused of conspiring against the Ecuadorian government.

Later Thursday, a senior Ecuadorian official said a Swedish software developer living in Quito had been arrested at the airport as authorities attempt to dismantle a blackmail ring that in recent days had threatened to retaliate against Moreno.

The official identified the person as Ola Bini. The official spoke on the condition of anonymity and didn’t provide any additional details about Bini.

On a blog, a Swedish man of the same name describes himself as a software developer working in Quito for the Center for Digital Autonomy, a group based in Ecuador and Spain focused on privacy, security and cryptography issues. It makes no mention of any affiliation with Wikileaks.

On Twitter earlier Thursday, Bini called claims by the Interior Minister that Russian hackers and someone close to Wikileaks were working inside Ecuador “very worrisome” news and said events looked like a “witch hunt.”

On Wednesday, WikiLeaks accused Ecuador’s government of an “extensive spying operation” against him. It alleges that meetings with lawyers and a doctor in the embassy over the past year were secretly filmed.

Speaking in the U.K. Parliament after the arrest, British Prime Minister Theresa May said it showed that “no one is above the law.”

Moreno appeared to suggest a swift extradition to the U.S. was unlikely.

“In line with our strong commitment to human rights and international law, I requested Great Britain to guarantee that Mr. Assange would not be extradited to a country where he could face torture or the death penalty,” Moreno said. “The British government has confirmed it in writing, in accordance with its own rules.”

“Images of Ecuador’s ambassador inviting the U.K.’s secret police into the embassy to drag a publisher of — like it or not — award-winning journalism out of the building are going to end up in the history books,” Snowden tweeted from Russia, which has granted him permission to stay there while he is wanted by the U.S. “Assange’s critics may cheer, but this is a dark moment for press freedom.”