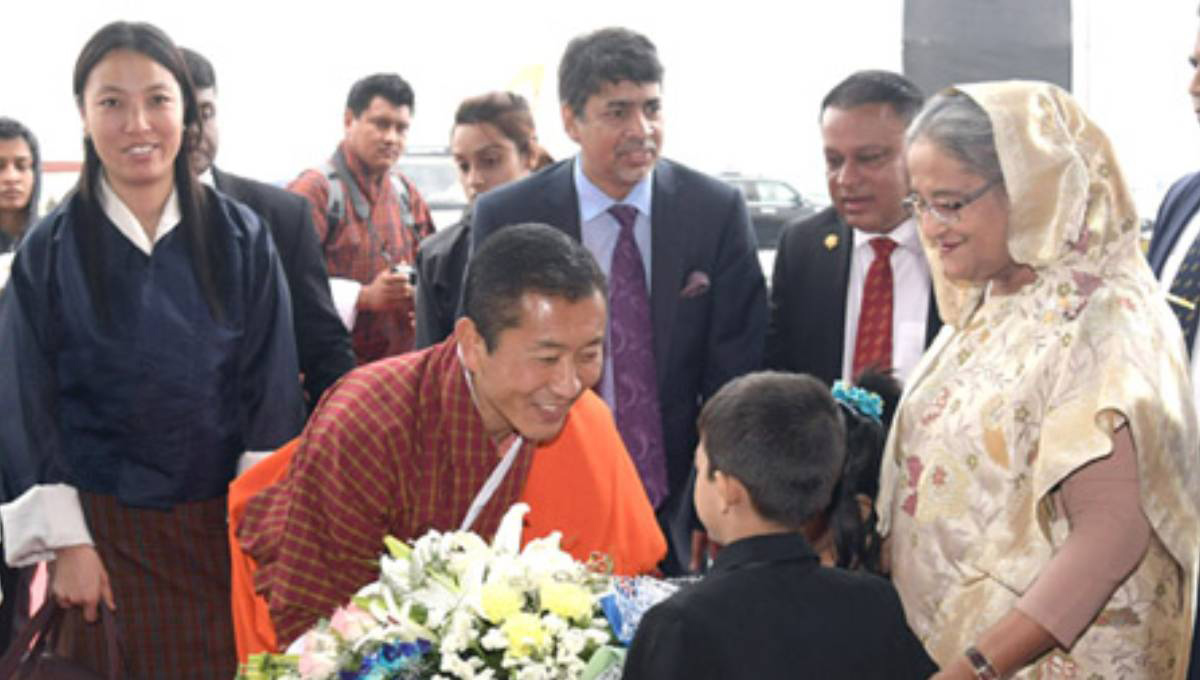 The Bhutanese Prime Minister is making the visit  at the invitation of Prime Minister Sheikh Hasina  aiming to bolster cooperation between the two countries in trade, inland waterways, health and agriculture sectors.

Prime Minister Sheikh Hasina welcomed her Bhutanese counterpart at the VVIP terminal of Hazrat Shajalal International Airport when the special flight of Royal Bhutan Airlines landed at the airport with his entourage at 8:15am.

A child presented him a bouquet.

A smartly turned out contingent drawn from Bangladesh Army, Navy and Air Force gave a guard of honour and state salute to the Bhutanese Prime Minister.

The two heads of government took the salute. The national anthems of the two countries were played on the occasion.

After the ceremony, the Bhutanese Prime Minister was taken to the Intercontinental Hotel Dhaka in a  ceremonial motorcade where he and his entourage will be stayin during the visit.

Later in the day, he will pay tributes to the Liberation War martyrs at the National Martyrs’ Memorial in Savar and to Father of the Nation Bangabandhu Sheikh Mujibur Rahman by placing wreaths at his portrait at Bangabandhu Memorial Museum in Dhanmondi.

On the first day, Foreign Minister Dr AK Abdul Momen will call on the Bhutanese premier at Hotel Intercontinental.

The Bhutanese PM is scheduled to hold a meeting with leaders of the Federation of Bangladesh Chambers of Commerce and Industries (FBCCI) later in the  day.

He will also visit the Bhutanese embassy at Baridhara and Buddhist Monastery at Basabo in the city.

On the same day, Tshering will meet President Abdul Hamid at Bangabhaban in the evening, and after that attend a banquet to be hosted by the Bangladesh Prime Minister at Hotel Pan Pacific Sonargaon.

On Sunday, which is the first day of Bangla calendar, he will attend a new year celebration cultural function to be organised by Surer Dhara at Bangabandhu International Conference Centre.

Later, Bhutanese Prime Minister Lotay Tshering, an alumnus of Mymensingh Medical College, will fly to the district to visit his alma mater. He will address a students’ gathering there.

He will return to Dhaka on the same day and meet Commerce Minister Tipu Munshi and Health and Family Welfare Minister Zahid Maleque separately in the afternoon.

Tshering is also scheduled to visit Square Pharmaceuticals factory in Gazipur, the Dharmarajika Buddhist Monastery Complex at Bashabo and the Embassy of Bhutan in Dhaka.

He is scheduled to have breakfast with Bhutanese students and citizens living here before leaving  Dhaka on April 15 morning.