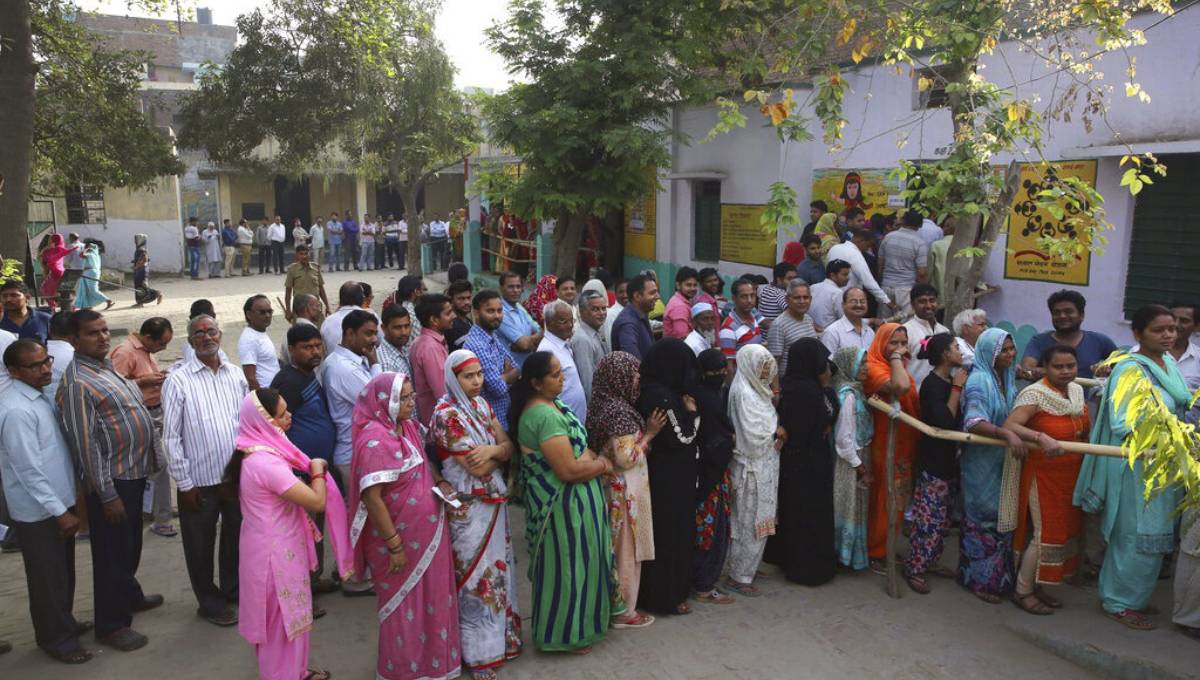 Photo: Indians stand in queues to cast their votes at a polling booth for the first phase of general elections, near Ghaziabad Thursday, April 11, 2019.

A festive spirit prevailed as men and women in colorful clothes made their way to heavily guarded voting stations in large numbers.

Voters in 18 Indian states and two Union Territories are casting ballots on Thursday, the first day of a seven-phase election staggered over six weeks in the country of 1.3 billion people.

The election is the world’s largest democratic exercise. Modi supporters say the tea seller’s son from Gujarat state has improved the nation’s standing. But critics say his party’s Hindu nationalism has aggravated religious tensions in India.

A polling officer puts indelible ink mark on the index finger of a voter for the first phase of general elections, near Ghaziabad, India Thursday, April 11, 2019.

Thursday’s voting is important for the BJP as it had won only 32 of 91 seats in the previous 2014 elections. It is seeking to improve its tally this time.

Some 900 million people are eligible to cast ballots at around a million polling stations across India. They will decide 543 seats in India’s lower house of Parliament.

Voting concludes on May 19 and counting is scheduled for May 23.

Modi came to power in 2014 and the party invoked its Hindu nationalist roots before the elections, with Modi at the forefront against the threat of Pakistan, India’s Muslim-majority archrival. Hindus comprise about 80% of India’s 1.3 billion people.

Even though India continues to be one of the fastest-growing economies in the world, the Modi-led government’s performance on the economy has come under criticism.

An Indian paramilitary soldier stands guard as a young boy dressed as a policeman stands next to his mother in a queue to cast their votes in village Sawaal near Meerut, Uttar Pradesh, India, Thursday, April 11, 2019.

The first item in the opposition Congress party’s election manifesto describes a plan for creating jobs. It also promises an income subsidy program for the poorest families and for farmers.