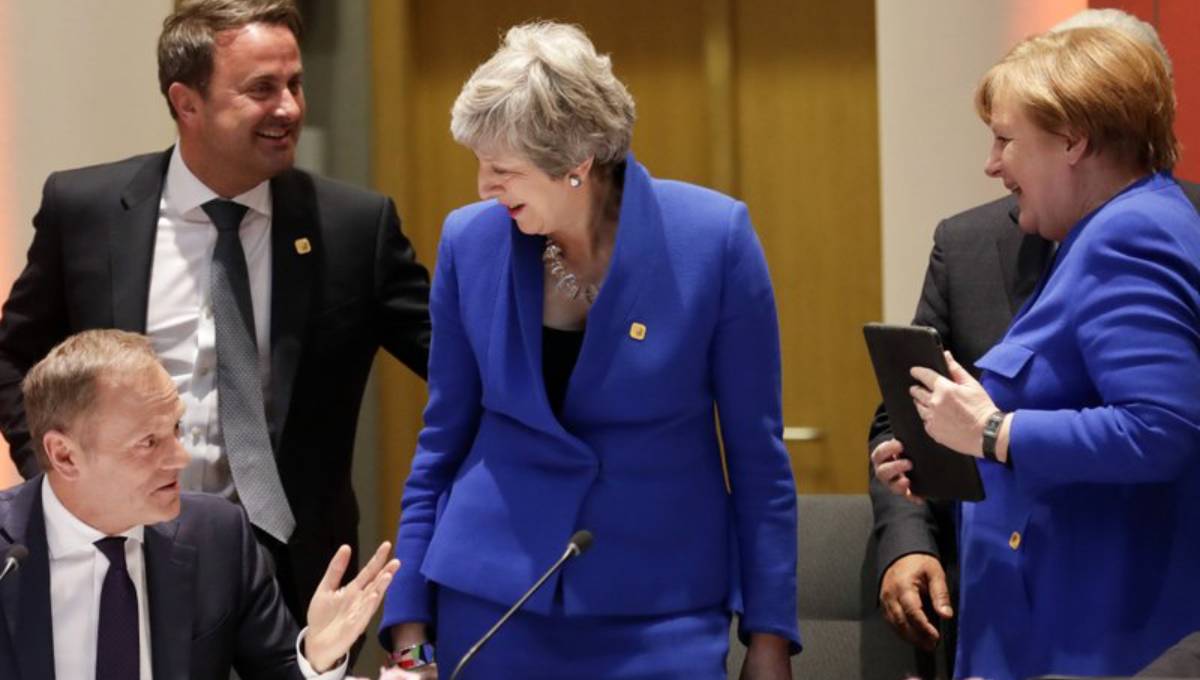 Brussels, Apr 11 : British Prime Minister Theresa May says the European Union has granted her “key request” to add an early exit clause to its agreement to a six-month Brexit extension.

The U.K. and the EU agreed early Thursday to delay Brexit until Oct. 31, but May says she wants to leave “as soon as possible.”

She says that if U.K. lawmakers back her Brexit deal, her country can still leave before June 30 — the Brexit deadline that she had requested from the bloc.

May says Britain faces “stark” choices “and the timetable is clear.”

French President Emmanuel Macron says a last-ditch six-month extension for Brexit is the “best possible compromise” to protect the rest of the European Union.

Macron was the main holdout among EU leaders at an emergency summit in Brussels against a long extension of Britain’s already-delayed departure from the EU. But he agreed early Thursday with other EU leaders to extend Brexit until Oct. 31.

He told reporters later that he did this “to preserve the unity” of the remaining 27 member states and to give Britain “more time to deliver a deal” that would prevent chaos in trade and travel when it leaves the EU.

Macron said it’s now “up to Britons to be clear with themselves and their people” about whether they want to participate in the European Parliament elections next month even though they would have to abandon the legislature a few months later.

EU Council chief Donald Tusk is pleading with the United Kingdom to use the special six-month Brexit extension it has been granted to the fullest of its ability.

After the agreement was announced early Thursday, Tusk said, “Let me finish with the message to our British friends: Please do not waste this time.”

And even though the decision also includes a June review of progress, Tusk says the new date will not amount to a cliff-edge cutoff of UK membership as March 29 had done for so long.

Tusk says that “our intention is to finalize the whole process in October.”

European Union leaders and Britain have agreed to allow Britain to extend Brexit until Oct. 31.

Tusk said early Thursday that it is a flexible extension, referring to his earlier offer that Britain could leave before if it accepted the withdrawal deal with the EU.

May came to the summit in Brussels requesting a delay until June 30 but acknowledged she would be willing to extend the date. The British Parliament has repeatedly rejected a withdrawal deal negotiated with the EU, leading to a deadlock over Britain’s long-awaited departure.

Two European officials say EU leaders are offering to allow Britain to extend Brexit until Oct. 31 and are awaiting the U.K.’s response.

The officials said that the European leaders agreed at an emergency Brexit summit early Thursday in Brussels that part of the offer is that the EU would assess the situation June.

The officials spoke to The Associated Press on condition of anonymity to discuss the closed-door negotiations.

British Prime Minister Theresa May was expected to meet with EU Council President Donald Tusk to discuss the offer.

May had come to the summit requesting a delay until June 30 but had acknowledged she would be willing to extend that date. The British Parliament has repeatedly rejected a withdrawal deal negotiated with the EU, leading to today’s deadlock over Britain’s long-awaited departure.

France is still playing hardball in the European Union’s negotiations over whether to grant British Prime Minister Theresa May another Brexit extension.

An official in French President Emmanuel Macron’s office said May hadn’t given “sufficient guarantees” at an emergency Brexit summit “to justify a long extension.”

May has asked the leaders of the EU’s 27 remaining nations to delay Britain’s departure until June 30. Some of those at Wednesday’s summit in Brussels favor an even longer extension.

The French official said all options remain on the table, including one May’s government and the EU worked to avoid: the U.K. falling out of the bloc Friday without a divorce deal in place. Huge trade and travel headaches are expected from a no-deal Brexit.

The official, who was not authorized to be publicly named according to presidential policy, said:  “The no-deal situation is a real option.”

The official says other EU leaders expressed concerns with a long extension, but acknowledged Macron is playing “bad cop” to pressure the British government into clarifying what it wants.

Forget about the date the U.K. will leave possibly leave the European Union. The real question gripping the EU summit: What was on Angela Merkel’s tablet?

Just as the meeting was about to kick off, the German chancellor walked over to her U.K. counterpart Theresa May, her tablet at the ready.

They both intently looked at the screen before sharing a hearty laugh. Then Merkel walked over to summit chair Donald Tusk, who joined in the merriment.

Doors soon closed on the cameramen and photographers at the Europa building, with apparently no one getting a peek at what was on her tablet.

Jokes soon followed. Were they comparing prices of their suits, which looked identical Europe-blue? One EU official said Merkel must have claimed she got it at half the price.

News conferences were still hours away, leaving the world waiting with bated breath.

Dutch Prime Minister Mark Rutte says he wants to know how British leader Theresa May plans to get a Brexit agreement through Parliament and  assurances the U.K. will remain a loyal European Union member until it leaves the bloc.

Rutte said after arriving for an emergency summit where the heads of remaining member countries are discussing May’s latest request to postpone Britain’s departure that Brexit has tested his patience “for some time now.”

The conservative leader of the Netherlands is pro-European and has close ties to Britain. He says the debate in Brussels on Wednesday is focusing on how long Brexit should be postponed, what conditions the EU should attach if it agrees to a delay, and “how we can get guarantees that in the meantime, the United Kingdom will stay as a loyal partner.”

Some European leaders say they are inclined to grant British Prime Minister Theresa May’s request to push back the U.K.’s deadline for leaving the European Union.

Estonian Prime Minister Juri Ratas says the EU “must do all that we can” to prevent the U.K. being out of the EU without a withdrawal deal or transition period, which could happen Friday if Brexit is not postponed.

Ratas says “of course” Estonia will support an extension.

Latvian Prime Minister Krisjanis Karins says if Britain is asking for more time, “I think we should consider giving them time.”

May has asked to push Brexit back until June 30, but many in the EU favor a delay of up to a year to give British politicians more time to break the country’s political impasse on Brexit.

Czech Prime Minister Andrej Babis said that “for me, the proposal to last until the end of March next year is fine.”

But French President Emmanuel Macron has warned that “nothing is decided.”

French President Emmanuel Macron says “nothing is yet decided” on whether and how long of a Brexit delay to offer Britain.

Macron is seen as the European leader most strongly opposed to British Prime Minister Theresa May’s request for another delay to the U.K.’s exit from the European Union.

While others expressed their willingness to grant an extension until June 30 or even next year, Macron said Wednesday at a Brexit summit in Brussels that “nothing is decided.”

Upon arriving at the summit, Macron insisted on “clarity” from May about what Britain wants, and said “nothing should compromise the European project.”

British Prime Minister Theresa May has signaled she is ready to accept a long delay to Brexit if other European Union leaders insist, as long as the U.K. has the option of leaving earlier if lawmakers ratify an EU divorce deal.

Arriving at an emergency Brexit summit in Brussels on Wednesday, May said she “greatly regrets” the U.K. hasn’t left the EU yet. Other European leaders at the summit are discussing her request to push back the departure date to June 30 to give Britain’s feuding politicians more time to approve divorce terms.

But the bloc favors a longer extension.

May said: “What is important is that any extension enables us to leave at the point at which we ratify the withdrawal agreement.”

She says she’s hopeful that could be by May 22.

The Czech Republic’s prime minister says he supports European Council President Donald Tusk’s proposal to grant Britain a longer delay than it has requested for its departure from the European Union.

British Prime Minister Theresa May travels to Brussels to attend an EU summit Wednesday seeking for another extension to Britain’s departure, until June 30. Britain is currently scheduled to leave the EU on Friday.

Tusk has suggested a delay of up to a year, with conditions attached to ensure Britain does not stymie EU decision-making while it remains a member.

Czech Prime Minister Andrej Babis says that Tusk’s plan would “calm down the situation” and also give Britain time enough to decide what it wants to do.

EU countries have become increasingly exasperated with the political division and uncertainty in Britain.

French government spokeswoman Sibeth Ndiaye is warning that the risk of a no-deal Brexit still exists ahead of a European Union summit.

Ndiaye said the issue has been brought up during the weekly Cabinet meeting on Wednesday at the Elysee palace, as President Emmanuel Macron was about to head to Brussels for the summit.

“The no-deal option is obviously the one we would least want … there’s actually a risk and France is prepared”, she said.

Ndiaye said that France is open to granting an extension to the Brexit deadline but “this is not automatic.” France wants a “clear and credible prospect” from Britain and commitments not to endanger the EU institutions, she said.

She declined to provide details on what kind of extension France considers acceptable.

Britain is currently scheduled to leave the EU on Friday, with or without a deal.

Britain’s pro-Brexit political parties are getting ready to do something they have long argued against — running in European Union elections.

Anti-EU figurehead Nigel Farage says his newly formed Brexit Party will run in the elections. He says the contest will bring “a rebirth of active Euroscepticism,” driven by Britons’ anger at the failure to leave the EU.

Farage’s former party, UKIP, also says it will run candidates in all parts of the U.K.

Brexiteers have condemned Prime Minister Theresa May for seeking to postpone the U.K.’s departure because she has failed to get Parliament’s approval for her EU withdrawal agreement.

May is asking for a delay until June 30, though the EU could offer longer. That means Britain would have to participate in late-May elections for the European Parliament — almost three years after the country voted to leave the bloc.