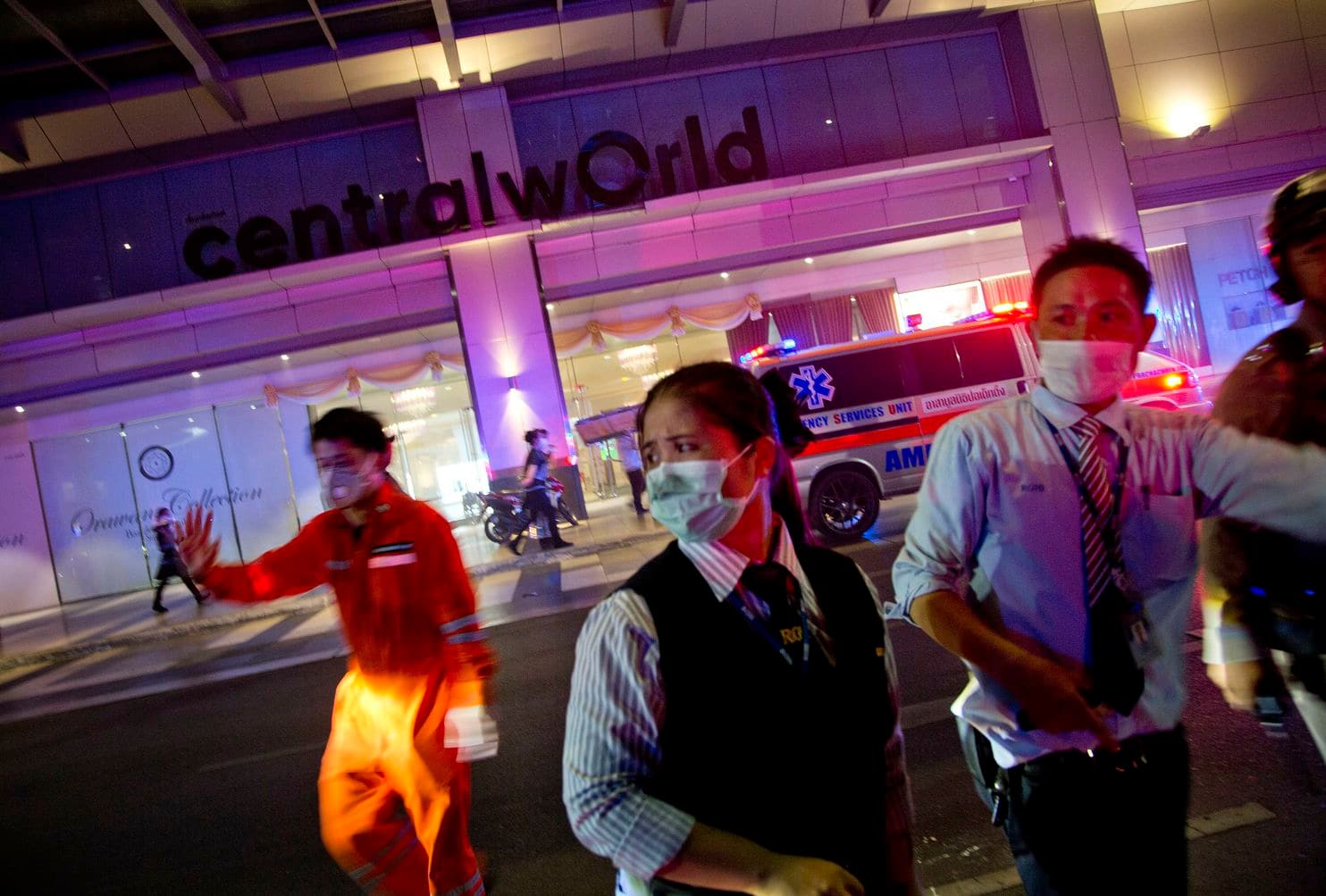 Photo: Rescue workers and mall staff try to control crowds at the scene of a fire outside the Central World mall complex in Bangkok, Thailand, Wednesday, April 10, 2019.

Bangkok, Apr 11 : A fire at one of Bangkok’s biggest mall complexes spread smoke over the city’s central commercial district, caused a large evacuation during the Wednesday evening rush and killed at least two people. Officials said 20 others were hurt.

The extent of the fire was small and flames were quickly extinguished, but it forced hundreds of people to evacuate the shopping mall in the CentralWorld complex, which includes a hotel, a convention center and an office tower. Firefighters with masks and oxygen tanks entered the building afterward to clear smoke from several floors.

Smoke was seen still coming from the building several hours later, but the skyline was clear after daybreak Thursday.

Bangkok Gov. Assawin Kwanmuang initially told reporters that three people died, one at the scene and two at a hospital. He later said that two people were confirmed dead, but did not explain the discrepancy. The city’s Erawan Emergency Radio network said around midnight that 20 people had been injured.

The company that operates CentralWorld said in a statement that the two people who died were company employees.

Assawin said the fire was believed to have started in a document storage room in one of the buildings that is part of the complex.

Video posted on social media soon after the fire began showed a person jumping from one of the complex’s buildings. Thai media reported that at least one of the people who died had jumped from a building.

Images showed large flames raging out of what appeared to be a rear portion of the complex.

Other video showed hundreds of evacuated shoppers filling a large open square next to the mall. Ambulances and other vehicles with their emergency lights on and trucks filled with firefighters could be seen.

In another video, a woman is seen directing shoppers out of the mall during the evacuation.

“I was in the mail and there was a burning smell and smoke started to come out,” said Suthep Damgjiam, who was with a friend. “A fire alarm started to ring and there were announcements on the PA system telling people to evacuate. We came out. There was a lot of smoke, but we didn’t see the fire itself.”

CentralWorld posted on social media that the fire started around 5:40 p.m., it immediately began evacuating the building and that firefighters brought the blaze under control within half an hour.

The fire broke out during Bangkok’s evening rush. Sirens wailed as emergency vehicles tried to move through the congested city’s gridlocked traffic.

CentralWorld sits at a major intersection surrounded by shopping complexes, shrines and high-rise hotels popular with foreign tourists. It’s near the main junction for Bangkok’s elevated train lines, as well as the Erawan Shrine, which was the site of a deadly bombing in 2015.

The mall typically would have been busy with shoppers as well as diners headed to the many restaurants inside.

CentralWorld was among several Bangkok buildings set on fire by arsonists during mass anti-government protests in 2010 and it was closed for months for rebuilding.

The mall is part of one of Thailand’s best-known chains of shopping centers controlled by the Central Pattana property development company, which operates retail complexes across Thailand. It is a division of the family-owned Central Group holding company.