Australian election May 18 to be fought on refugees, economy 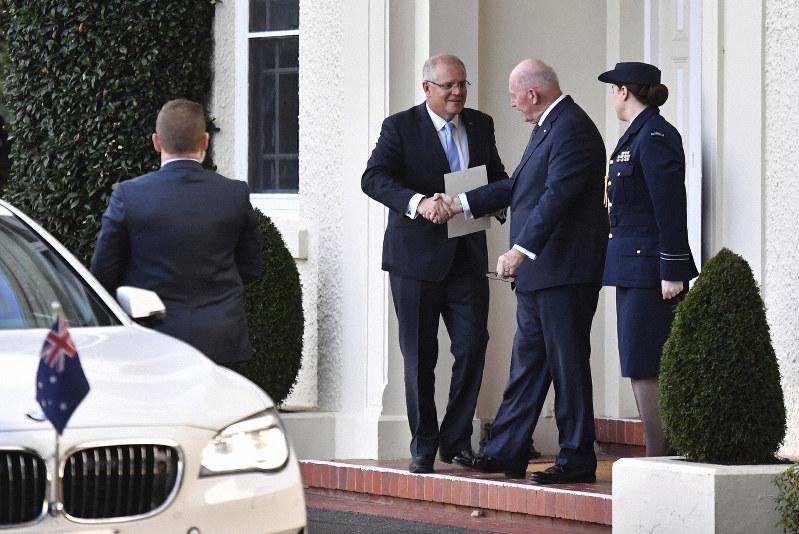 Canberra, Apr 11 : Australia’s prime minister on Thursday called a May 18 election that will be fought on issues including climate change, asylum seekers and economic management.

“We live in the best country in the world,” Prime Minister Scott Morrison told reporters after advising the governor-general to authorize the election.

“But to secure your future, the road ahead depends on a strong economy. And that’s why there is so much at stake at this election,” he added.

Morrison’s conservative coalition is seeking a third three-year term. But Morrison is the third prime minister to lead a divided government in that time and only took the helm in late August.

The election pits Shorten, a former labor union leader who has presented himself as the alternative prime minister for the past six years, and Morrison, a leader who the Australian public is still getting to know.

Shorten said in his first news conference since the election was called that his government will take “real action on climate change” and reduce inequality in Australian society if his Labor Party wins power.

“Australians face a real and vital choice at this election. Do you want Labor’s energy, versus the government’s tiredness? Labor’s focus on the future, versus being stuck in the past?” Shorten said.

Morrison is seen as the architect of Australia’s tough refugee policy that has all but stopped the people-smuggling traffic of boats from Southeast Asian ports since 2014. The policy has been condemned by human rights groups as an abrogation of Australia’s responsibilities as a signatory to the United Nations Refugee Convention.

Asylum seekers from the Middle East, Africa and Asia would typically disable or sink their boats when intercepted by patrol ships in waters north of Australia so that the Australian crews would have to rescue them rather than turn the boats away. Under the new regime, the asylum seekers were placed in motorized life boats that were towed back to Indonesia. The life boats had just enough fuel to reach the Indonesian coast. The Indonesian government complained the policy was an affront to Indonesian sovereignty.

The government has also maintained a policy adopted in the final months of a Labor government in 2013 of sending boat arrivals to camps on the Pacific island nations of Papua New Guinea and Nauru. Those who attempt to reach Australia by boat are told they will never be allowed to settle there.

Morrison remains proud of virtually stopping people-smuggler boat traffic. He has a trophy shaped like a people-smuggler’s boat in his office inscribed with “I Stopped These.”

Labor has promised to maintain the policy of banishing boat arrivals to the islands. But Labor says it would give priority to finding permanent homes for the asylum seekers who have languished in island camps for years.

The conservative coalition argues that the boats would start coming again because a Labor government would soften the regime. The government introduced temporary protection visas for boat arrivals so that refugees face potential deportation every three years if the circumstances that they fled in their homelands improve. Labor would give refugees permanent visas so that they have the certainty to plan their lives.

Climate change policy is a political battlefield in a country that is the world’s largest exporter of coal and liquefied natural gas and has been one of the world’s worst greenhouse gas emitters on a per capita basis because of its heavily reliance on coal-fired power generation.

Disagreement over energy policy has been a factor in the last six changes of prime minister.

The coalition is torn between lawmakers who want polluters to pay for their greenhouse gas emissions and those who reject any measures that would increase household power bills.

Labor has promised a more ambitious target of a 45% reduction in the same time frame.

Action on climate change was a major priority for votes when conservative Prime Minister John Howard’s reign ended after more than 11 years at an election in 2007.

Labor Prime Minister Kevin Rudd immediately signed up to the U.N.’s 1997 Kyoto Protocol on reducing emissions. Australia and the United States had been the only industrialized countries to hold out.

Climate change dropped down the list of Australian priorities after the global financial crisis hit.

But after Australians sweltered through a record hot summer and grappled with devastating drought, global warming has become a high-priority issue for voters again.

The government warns that Labor’s emissions reduction plan would wreck the economy.

The coalition also argues that Labor would further damage the economy with its policy of reducing tax breaks for landlords as real estate prices fall in Australia’s largest cities, Sydney and Melbourne.

Morrison boasts that the conservative administration Prime Minister Howard led delivered 10 annual surplus budgets and paid off all federal government debt before the government changed at the 2007 election.

Rudd had planned a budget surplus in his government’s first fiscal year, but the global financial crisis struck.

Many economists congratulate Rudd for keeping the Australian economy out of recession through stimulus spending. The coalition has accused Labor of spending too much and sinking Australia too deep in debt,

The government brought forward its annual budget blueprint by a month to April 2 and revealed a plan to balance Australia’s books in the next fiscal year for the first time in 12 years.

Labor also promised to deliver a surplus budget in the year starting July 1, but it has yet to detail how it will achieve this goal.

Labor has also promised to spend an additional AU$2.3 billion ($1.6 billion) over four years on covering treatment costs of cancer patients. It’s an attractive offer with half Australia’s population expected to be diagnosed with some form of the disease in their lifetimes.

The conservatives have largely taken credit for Australia’s remarkable run of 28 years of economic growth since its last recession under Labor’s rule.

Morrison hopes that voters will look to him to deliver a sequel to the Howard years when a mining boom delivered ever-increasing budget surpluses.