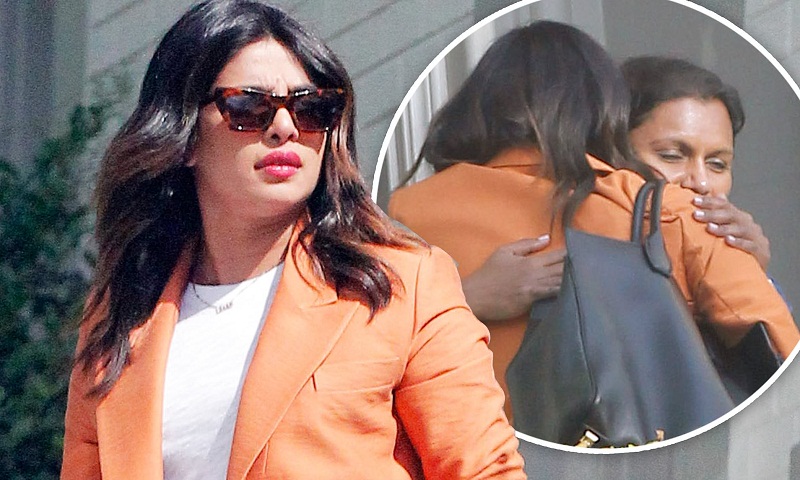 Actor Priyanka Chopra had been busy partying with husband and American singer Nick Jonas, who just launched his second single, Cool. The actor, who just featured in the Jonas Brothers’ earlier single, Sucker, seems to have now moved her focus to her next project. The Bajirao Mastani actor was spotted with actor Mindy Kaling, weeks after she was rumoured to be working with her on a Hollywood project, reports Hindustan Times.
The actor was dressed in an orange blazer to beat the New York winter, worn over a white tee and denims and paired with animal print boots. She can be seen sharing a warm hug with Mindy, who is seen in a blue tee-shirt.New pictures of the actor hanging out with Mindy in New York have surfaced online.

While Mindy was last seen in a cameo in Oceans 8, Priyanka featured in the Rebel Wilson and Liam Hemsworth starrer Isn’t It Romantic. Priyanka’s look of a quirky girlfriend in the Jonas Brothers’ comeback single, Sucker was also hailed by her fans.

The actor has already completed the shoot of her comeback Bollywood film, The Sky Is Pink. Directed by Shonali Bose, the film also stars Zaira Wasim and Farhan Akhtar. It is set to hit theatres on October 11 this year.

riyanka has been busy bonding with her in-laws. The Quantico actor shared the screen space with the Jonas Brothers – Joe and Kevin and their partners Sophie Turner and Danielle in Sucker.