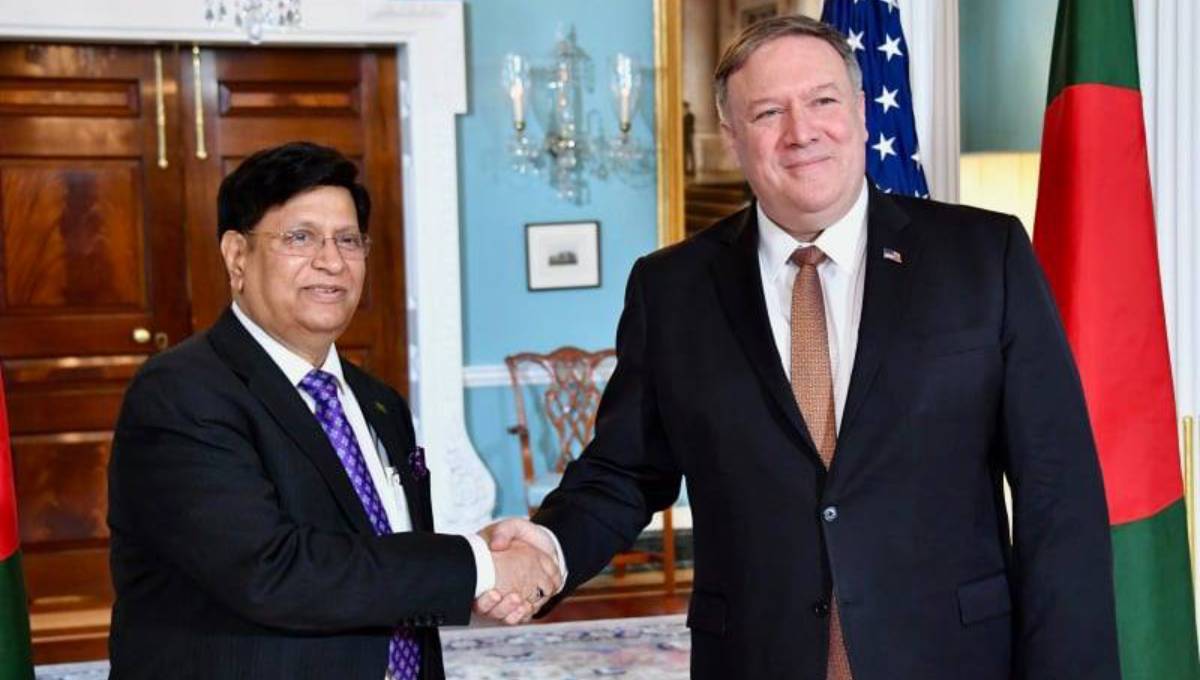 Dhaka, April 9 : Bangladesh has sought US support to create a safe zone in Rakhine for Rohingyas, monitored by international human rights groups, with credible international pressure on Myanmar for their safe return.

Foreign Minister Dr AK Abdul Momen met with US Secretary of State Mike Pompeo in Washington, D.C. on Monday and discussed the situation.

This was the first meeting between the two leaders since their assumption of office in respective governments.

Issues featuring in the meeting were: repatriation of the Rohingyas and creation of credible international pressure on Myanmar in that respect, deportation of Bangabandhu’s killer Rashed Chowdhury from USA to Bangladesh, shared vision of a Free and Open Indo-Pacific, US investments in Bangladesh, duty and quota free access of Bangladesh’s garments products in the US market and US-Bangladesh partnership in multiple sectors.

He informed that Bangladesh at its own expense has developed the island “Bhashanchar” into a livable place in which one lakh Rohingyas are planned to be relocated in coordination with UN agencies and different aid groups, according to Bangladesh Embassy in Washington.

The US Secretary of State re-assured that the one million plus forcibly displaced Myanmar nationals have to return to Myanmar without any form of fear and persecution.

He said it is the responsibility of the Myanmar government and military to create conducive environment so that the Rohingyas feel safe to return home.

The US Secretary of State reiterated that US would stand beside Bangladesh (both politically and financially) in finding a permanent solution to the Rohingya crisis.

He also lauded the humanitarian gesture of the government led by Prime Minister Sheikh Hasina for temporarily sheltering the persecuted Rohingyas.

Regarding deportation of Bangabandhu’s self-confessed and convicted killer Rashed Chowdhury from the USA, the Bangladesh Foreign Minister pointed out that he is fleeing justice.

He said this is essential to carry out a vital common agenda of both countries pertaining to Counter-terrorism and Countering-Violent Extremism and upholding rule of law.

Both leaders agreed that for greater prosperity in the Indo-Pacific region, vital energy and infrastructure projects need to be implemented on regional partnership basis.

In that respect, leaders of the region need to work together on issues such as governance, accountability, rule of law and maritime security.

Dr. Momen stated that Bangladesh is lauded internationally for its impressive development journey.

He sought more investment from the USA in the oil and gas sector and US presence in the Special Economic Zones.

Foreign Minister Momen sought US support to the candidature of Bangladesh in the upcoming election to the post of Deputy Director General of International Organization for Migration (IOM).

Later in the day, the visiting Bangladesh Minister held meetings with senior officials of the US State Department and Deputy National Security Adviser Charles Kupperman. Bangladesh Ambassador to the USA Ambassador Mohammad Ziauddin accompanied the Minister at the meetings.