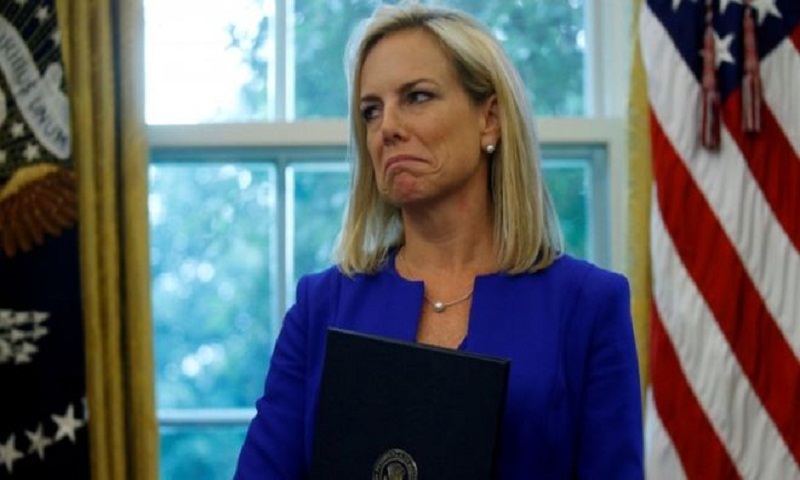 The US Secretary of Homeland Security Kirstjen Nielsen, who enforced some of President Trump’s controversial border policies, has resigned.
Ms Nielsen called it “an honour of a lifetime” to work in the department.President Trump tweeted she would be temporarily replaced by Customs and Border Protection Commissioner Kevin McAleenan.

Ms Nielsen was responsible for implementing the proposed border wall and the separation of migrant families.

She gave no reason for her departure in her resignation letter, although she said this was “the right time for me to step aside” and said the US “is safer today than when I joined the Administration”.The announcement she is leaving her post comes days after the president visited the southern border.

Mr Trump has recently threatened to shut the crossing, but has since backtracked and promised to give Mexico a year to stop drugs and migrants crossing into the US.

Who is Kirstjen Nielsen?

She became Mr Kelly’s deputy when he moved to become White House chief of staff, but returned to lead her former department later that year.

Ms Nielsen defended border policies such as holding children in wire enclosures in the face of strong condemnation and intense questioning by Democrats in Congress.

In June 2018 protesters booed Ms Nielsen as she ate at a Mexican restaurant in Washington DC.

But she brushed off the demonstration, tweeting that she would “work tirelessly” to fix the “broken immigration system”.

Her relationship with Mr Trump is said to have been difficult, although in public she has been loyal to the administration.

What’s been the reaction?

Members of the Democratic party have already commented on her departure, with Massachusetts Senator Ed Markey calling the move “long overdue”.

However, he said the fight is “far from over to ensure Trump’s assault on our immigrant community comes to an end”.

But Republican Senator Lindsey Graham praised Ms Nielsen, saying she “did her best to deal with a broken immigration system and broken Congress”.

President Trump insists the situation on the southern border is a crisis and has declared a national emergency, bypassing Congress to secure funds for his border wall plan.

Democrats have protested against the move, and declared the emergency unconstitutional.