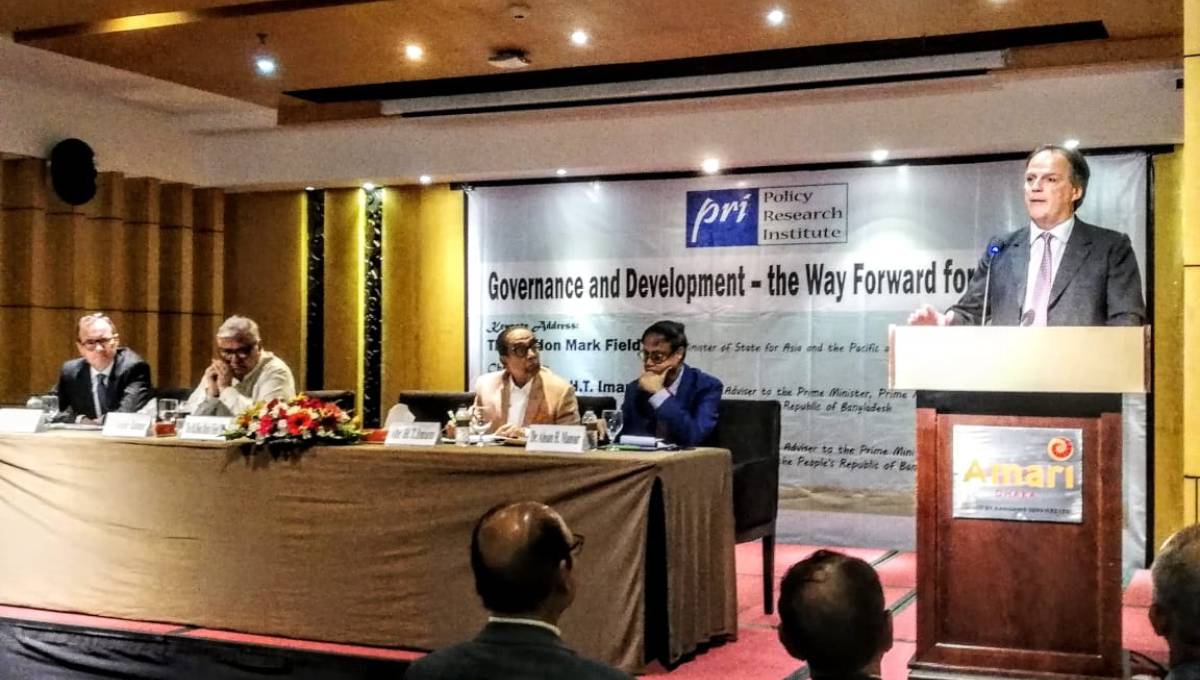 Photo : British Minister of State for the Asia and the Pacific Mark Field delivers keynote address at a seminar titled ‘Governance and Development- the Way Forward for Bangladesh’ in Dhaka on Sunday, April 07, 2019.

Dhaka, Apr 7 : As a close friend of Bangladesh, the United Kingdom (UK) wants to see a confident Bangladesh with “strong, transparent and accountable” democratic institutions, said a visiting British Minister here on Sunday.

“We want to see a lively debate, a vibrant civil society, and competitive elections,” said British Minister of State for the Asia and the Pacific Mark Field while delivering keynote address at a seminar in a city hotel.

The UK Minister said they want to see this flourishing democratic landscape carefully scrutinised and held to account by a free and vibrant media.

“That would be a wonderful vision for Bangladesh in its second half century, and it would also be the best way for it to realise its undoubted potential,” said the British Minister of State adding that the UK stands ready to help Bangladesh achieve that potential, in whatever way they can.

Minister Field said the bonds of history and kinship between the two countries make the relationship particularly strong and deep.

“As a longstanding friend, the UK welcomes the great strides that Bangladesh has made over the last half century, and recognises the great potential it has to achieve still more in the next,” said Field who is in Dhaka for the third time. He will leave here for London on Monday.

The British Minister mentioned that Bangladesh is looking forward to its 50th anniversary in two years’ time, and to celebrating many achievements, from bringing over 50 million people out of extreme poverty since 1990, to increasing the life expectancy and reducing infant mortality, to boosting economy to one of the fastest growing in the world.

“We’ll be celebrating with you, remembering the part our country played in your liberation struggle,” he said adding that he himself remembers the momentous days of the  “Stop Genocide, Recognise Bangladesh” rally in Trafalagar Square; George Harrison’s benefit concert in New York; and reports in the British papers about Bangabandhu’s return via London to a newly independent Bangladesh.

He said Bangladesh, today, can be proud of the huge progress it has made against the Sustainable Development Goals.

Highlighting elections and democracy, Field said that means holding elections that are fair, and that present voters with a free choice. “Again, as a friend of Bangladesh it gives me no pleasure to say this, but I fear the parliamentary elections which took place here in December did not meet this standard – as I said at the time.”

He, at the time, also pressed for a full, credible and transparent resolution of all complaints.

“I think we all recognise that the notion of choice is crucial in any healthy democracy. Without it, there’s a risk that voters might seek other ways of achieving the changes they want,” Field said.

Ultimately, he said, that could pose a much greater threat to stability than allowing them to express their views through democratic channels.

“That’s why it’s so important to have a political opposition in place, one that’s able and willing to hold the government to account and offer an alternate view,” said the British Minister.

He said it is so vital to allow space for a vibrant civil society, through which people – and especially young people – can channel their energies, and indeed their frustrations, within the law. “That means upholding Bangladesh’s fine tradition of allowing people to voice dissent and express themselves freely.”

The British Minister said allowing the media to do its job of holding the powerful to account, which as they all know is so crucial in upholding the transparency and credibility of institutions, and bearing down on corruption.

“This really matters, because the strength and accountability of our institutions, and the confidence that they inspire in investors, are also crucial to our democracies – and to our economies,” he added.

“And as a friend of Bangladesh I profoundly hope that, as Bangladesh graduates to middle-income status, it’ll remain true to its democratic values,” he said.

The British Minister said there are few places in the world where those links are stronger than here in South Asia, thanks to the thousands of personal connections.

“There’re now some 600,000 British citizens of Bangladeshi heritage, many of them in my own constituency in London. We greatly value their contributions to all walks of British life,” he said.

About education sector cooperation, Field said the UK stands ready to help invest in young people which is another crucial element in the future success of this country.

“Every time I come here, I’m struck by the energy and talent of the people. I would very much like more of them to have the opportunity to benefit from the UK’s world class educational institutions,” he said.

He said the current government maintains strong relations with the British parliament and both the conservative and liberal parties.

The Adviser also said their major challenge is to provide good governance and also maintain steady and speedy growth for development. “We have twin goals.”

He said good governance is not just maintain law and order, its also controlling the militants and also adhering the policy of zero tolerance against militancy and drugs.

Dr Mashiur Rahman said Bangladesh faces a choice between the two – a democratic secular government and political system and a Sharia-based Jihadi force. “We got the better,” he said.