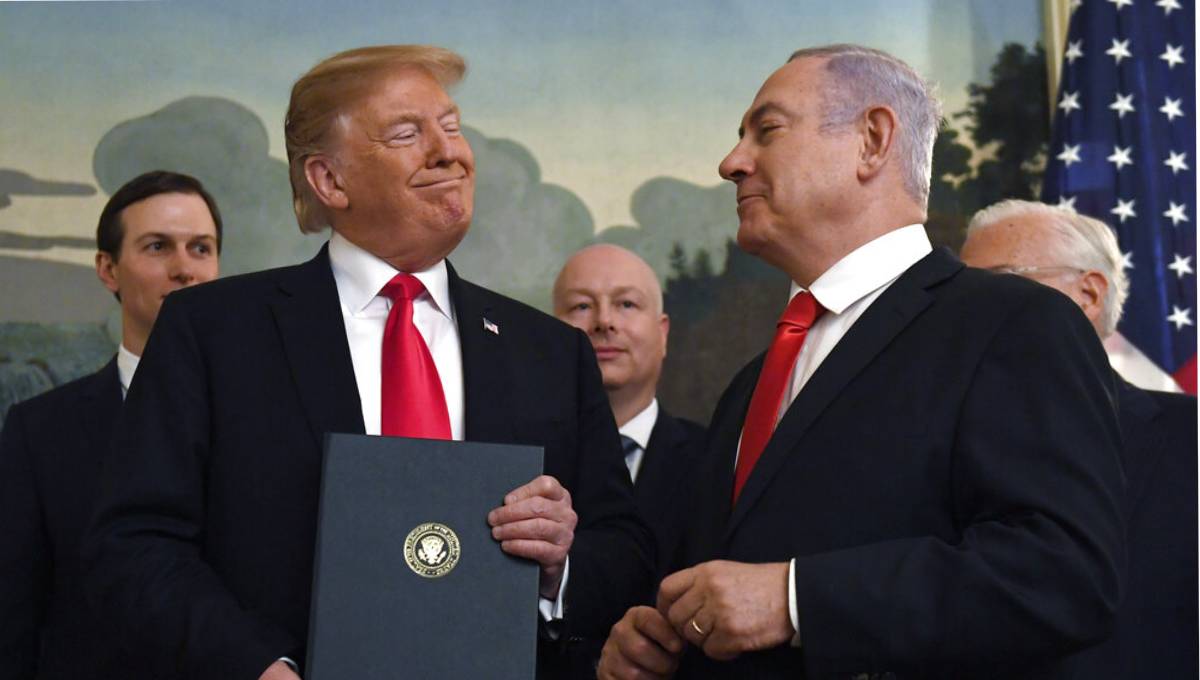 Photo: In this Monday, March 25, 2019 file photo, President Donald Trump smiles at Israeli Prime Minister Benjamin Netanyahu, right, after signing a proclamation in the Diplomatic Reception Room at the White House in Washington. Trump isn’t on the ballot for Israel’s national election, yet he’s a dominant factor for many American Jews as they assess the high stakes of balloting on Tuesday, April 9, 2019.

Jerusalem, Apr 7 : Israeli Prime Minister Benjamin Netanyahu pledged Saturday to annex Jewish settlements in the occupied West Bank if re-elected, a dramatic policy shift apparently aimed at rallying his nationalist base in the final stretch of the tight race.

Netanyahu has promoted Jewish settlement expansion in his four terms as prime minister, but until now refrained from presenting a detailed vision for the West Bank, seen by the Palestinians as the heartland of a future state.

An Israeli annexation of large parts of the West Bank is bound to snuff out any last flicker of hope for an Israeli-Palestinian deal on the terms of a Palestinian state on lands Israel captured in 1967.

A so-called two-state solution has long been the preferred option of most of the international community. However, intermittent U.S. mediation between Israelis and Palestinians ran aground after President Donald Trump recognized Jerusalem as Israel’s capital early in his term. The Palestinians, who seek Israeli-annexed east Jerusalem as their capital, suspended contact with the U.S.

More recently, Trump recognized Israeli sovereignty over the Golan Heights, a plateau Israel captured from Syria in 1967. The move was viewed in Israel as a political gift by Trump to Netanyahu who is being challenged by former military chief Benny Gantz.

The U.S. State Department declined to comment on Netanyahu’s statement.

Polls have indicated a close race, though Netanyahu’s Likud Party is expected to have a better chance than Gantz’s Blue and White slate to form a ruling coalition. Polls forecast more than 60 out of 120 parliament seats for the Likud and smaller right-wing and ultra-Orthodox Jewish parties

On Saturday, Netanyahu gave an interview to Israel’s Channel 12 TV at the top of the prime-time newscast. Netanyahu portrayed the U.S. policy shifts on Jerusalem and the Golan Heights as his achievements, saying he had managed to persuade Trump to take these steps.

Netanyahu pledged that he would not dismantle a single Jewish settlement and that Israel would retain control of the territory west of the Jordan River — the West Bank. More than 600,000 Israelis now live on war-won lands, two-thirds in the West Bank.

“I will impose sovereignty, but I will not distinguish between settlement blocs and isolated settlements,” he said. “From my perspective, any point of settlement is Israeli, and we have responsibility, as the Israeli government. I will not uproot anyone, and I will not transfer sovereignty to the Palestinians.”

In any partition deal, the more isolated Jewish settlements would likely have to be uprooted to create a viable Palestinian state.

No country thinks foreigners are at risk in Bangladesh: Minister