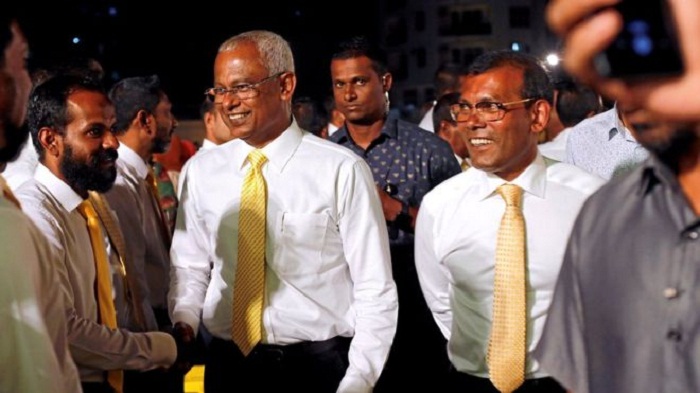 Final results are expected to be declared on Sunday.

An MDP win would solidify the comeback of the country’s former president and MDP leader Mohamed Nasheed, who was in exile until late last year.

“This [the result] will go a long way in consolidating democracy in the Maldives,” Mr Nasheed told the BBC.

His party campaigned on a platform of reforming the judiciary, upholding freedom of expression and democracy.

Mr Nasheed was forced into exile in 2016 following a controversial terrorism conviction during the rule of Abdulla Yameen.

Hundreds of supporters of the Maldivian Democratic Party have gathered in the capital Male celebrating the victory.

Mohamed Nasheed is leading the celebrations.

It’s a remarkable comeback for the former president who was forced into exile till late last year following a controversial terrorism conviction.

A clear majority will help his Maldivian Democratic Party to consolidate its hold on power and carry out political and economic reforms.

The party says it wants to reduce political influence over the judiciary and police and end corruption.

The MDP also wants to reduce the country’s dependence on China and forge closer ties with its traditional ally, India.

During his rule, Mr Yameen jailed many of his political opponents and removed dissenting voices from institutions such as the Supreme Court.

Mr Yameen did not stand in the election but his Progressive Party of Maldives (PPM) contested.

The election in the Indian Ocean archipelago is also seen as a battleground for regional powers China and India, which are vying for influence in the country.

When Mr Yameen was in power, China invested millions of dollars as part of its Belt and Road initiative. The MDP has promised to investigate the infrastructure projects and determine the island’s true debt to China.

Mr Yameen denies any wrongdoing in relation to the Chinese financial aid.