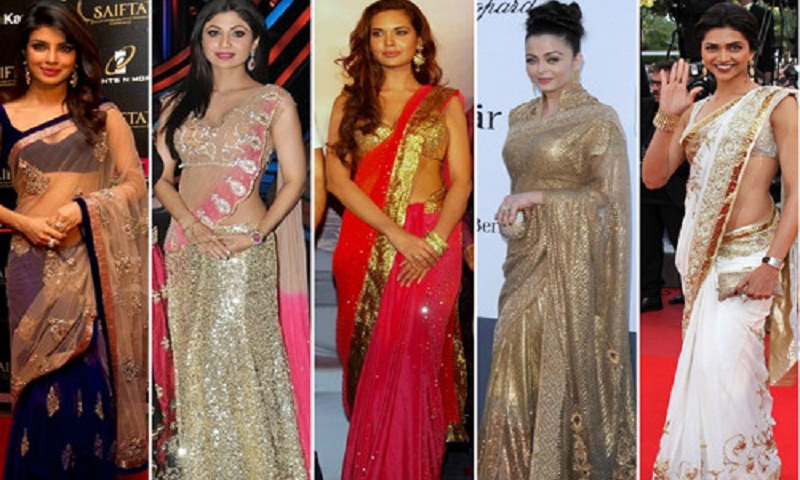 When actor Deepika Padukone wore a red dupatta with the Sanskrit quote ‘Sada Saubhagyavati Bhava’ embroidered in gold at her wedding ceremony last year, a fashionable love affair between traditional canvas and typography was kindled. And it has been a whirlwind romance ever since. From Nita Ambani’s ‘Shubharambh’ (translating to ‘a good beginning’) embroidered lehenga choli by Sabyasachi to Sonam Kapoor Ahuja’s House of Masaba sari featuring letterings in Tamil or the Anamika Khanna lehenga choli set featuring her name along with the phrase ‘Everything is AK-OK’, wearing your ‘thoughts’ on your ‘traditional’ sleeves, is the new big deal in the trend-o-sphere.It’s not just about the slogan T-shirt or denims any longer. A while back, actor Karisma Kapoor too was seen flaunting the trend, with a typography-printed Satya Paul sari that spelt out ‘mirchi’ in Hindi, report Hindustan Times.
Stylist Rishi Raj asserts that customisations such as these help take “couture to the next level”. He adds, “It can’t get more bespoke or customised in this world which wants everything couture. A couture piece is like owning an exquisite piece of art and its exclusivity increases when you have typography or a slogan that’s uniquely yours.”A slogan is a basic way of telling the world who and what you are, what you like and dislike or what you believe in. But designer Rahul Mishra points out that not all occasions demand one to make a statement. He reveals he has been “getting a lot of requests for customisation of different sorts” but shares “when it comes to slogans being featured on formal garments, one needs to take the understated route”. Mishra says, “I don’t think having big slogans will work on formal garments but I love the idea of typography. Slogans of any sort, on any garment, mostly illustrate the political or social state of present times, and formal functions don’t demand such issues to be highlighted.”

On the other hand, designer Kunal Rawal says “there are no rules”. He insists that “the market is more than ready now for such trends.” Kunal, who loves customising his creations, shares, “Go for something that resonates with you. Something you want to see again and again.” He points out, “This trend has also given men the apt opportunity to be as involved as women while choosing a garment. Garments featuring wedding dates are a huge hit with the fashion enthusiasts. Besides the usage of numerals, roman numbers are a great option too, and the market will see much more of the trend.”

Naturally, in such a trend explosion, one is forced to question the longevity of the garment with typography and its enduring appeal. To ensure it, celebrity stylist Isha Bhansali advises “never opt for something that’s in your face, and be extremely careful with the placement of the slogan or the text”. She adds, “Also, ensure that when the slogan is embroidered/placed on the garment, it should be in sync with the whole colour story of your ensemble. Don’t make it too colourful. Don’t place it near a body part where it will be too much to handle. Fashion is all about the right balance.”