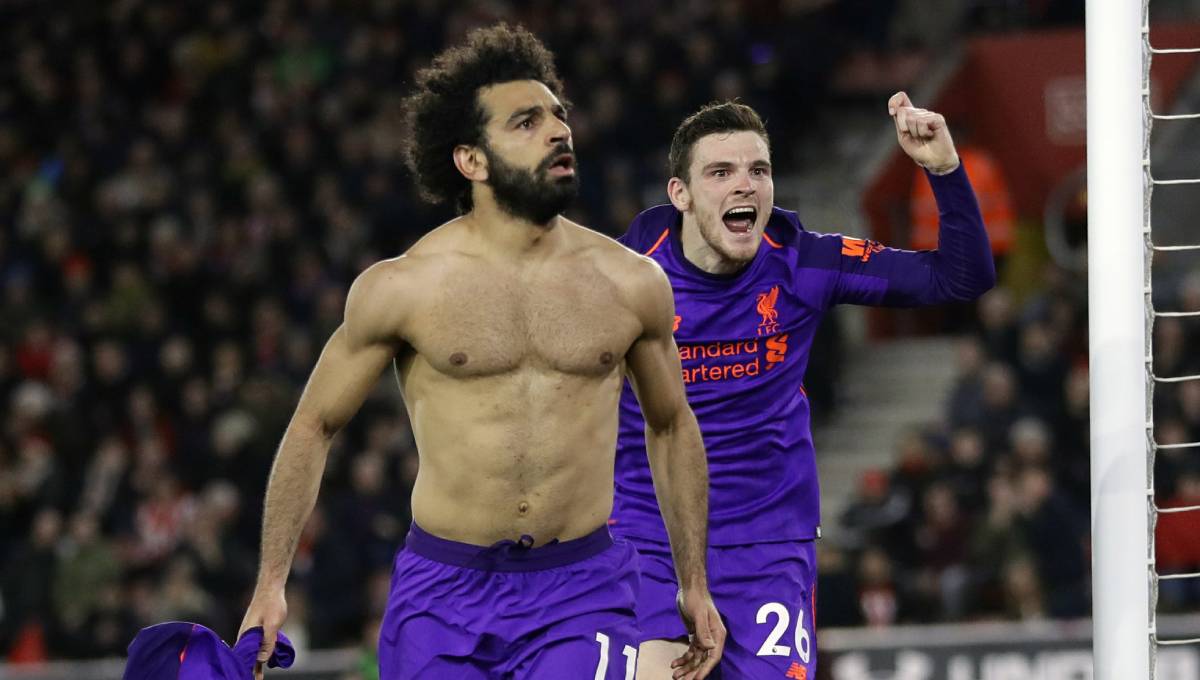 It helped to lift his team back to the top of the Premier League.

Salah scored for the first time in nine games — a barren streak stretching back nearly two months — as Liverpool came from behind to beat Southampton 3-1 on Friday and move back into first place, two points above Manchester City.

The Egypt forward completed Liverpool’s comeback after falling behind in the ninth minute when he collected the ball 10 meters inside his own half on a counterattack, sprinted forward and sent a dipping shot into the bottom corner from the edge of the area in the 80th minute.

He removed his jersey in celebration in front of Liverpool’s jubilant fans, who were jumping up and down in delight again six minutes later when Jordan Henderson added a third goal at St. Mary’s Stadium.

City has a game in hand but isn’t in league action this weekend because it is playing in the FA Cup semifinals. This season, the defending champions have a title rival that just won’t go away.

Liverpool is showing amazing spirit and powers of recovery as it goes for a first league title since 1990, with this win coming five days after benefiting from a 90th-minute own goal to beat Tottenham at Anfield. In the league game before that, Liverpool needed an 81st-minute penalty to see off lowly Fulham.

“The performance was not top level, but it is about fighting,” manager Juergen Klopp said. “People want us to play like Manchester City. We are unable to do that. We play our own football.

“We have 82 points now. That is massive in this crazy league and everyone is waiting for us. I am really proud. It is incredible.”

Liverpool looked shaky at times, especially in the first half after Southampton took the lead through Shane Long’s ninth-minute goal.

Klopp’s team recovered to draw level in the 36th through Naby Keita’s first goal for the club, from Trent Alexander-Arnold’s right-wing cross, since his offseason move from Leipzig for a reported 70 million euros (then $85 million).

Salah, who has been upstaged by teammate Sadio Mane in recent weeks, was having another below-par game by his standards until his superbly taken goal, his first since Feb. 9.

“Mo Salah could not pass for his goal,” Klopp said. “Go, go, go, and a world-class finish.”

With 18 league goals, Salah is one behind Man City striker Sergio Aguero in his bid to retain the Golden Boot for top scorer in the league.

Henderson proved to be a calming influence for Liverpool after coming on for Georginio Wijnaldum in the 59th minute. The captain had an end product, too, gliding into the area to meet Roberto Firmino’s cross with a firm finish from close range.

Liverpool still needs City to falter at least once but has the easier run-in on paper, with its hardest game coming next against Chelsea at home. City, on the other hand, has games against Tottenham and Manchester United still to come.