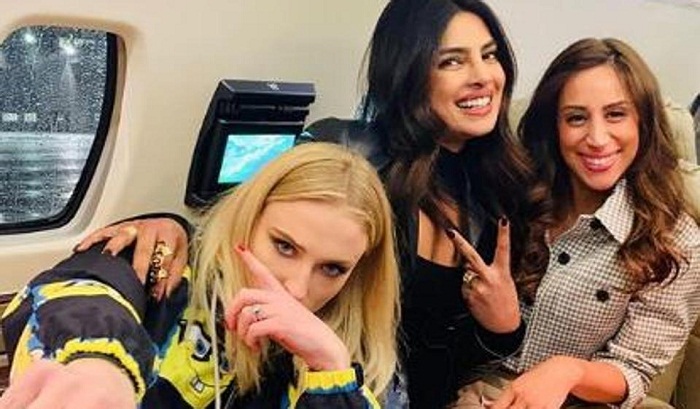 Bollywood actor Priyanka Chopra, who married American singer Nick Jonas last year, has shared a rare picture of the ‘Jonas sisters’ Danielle Jonas, Sophie Turner, and herself, all posing together. Sharing the picture on Instagram Friday, Priyanka wrote, “The #Jsisters are finally together.” She tagged both Sophie and Danielle, Joe Jonas’ fiance and Kevin Jonas’ wife, respectively.

The three ladies pose with victory signs aboard a plane. Kevin Jonas posted emojis of their latest single, Cool, in reaction. Priyanka’s mother-in-law Denise also commented on the picture and wrote, “Love this, love you Dilly’s.”

While Priyanka, Game of Thrones actor Sophie Turner and Kevin Jonas’ wife Danielle appeared in the first comeback single – Sucker – from Jonas Brothers, the ladies are not part of their latest number, Cool.

Priyanka and Nick got married on December 1 at Jodhpur’s Umaid Bhawan Palace hotel in twin weddings in accordance with Christian and Hindu rituals.Priyanka’s Hollywood film, Isn’t It Romantic released earlier this year.

Priyanka has completed the shooting for Shonali Bose’s The Sky Is Pink with Farhan Akhtar and Zaira Wasim. She recently launched her YouTube series If I Could Tell You One Thing. Priyanka is also producing a film on the Rajneeshpuram community, in which will play convicted criminal and Osho disciple Ma Anand Sheela.

GM Quader to act as JP chief in Ershad’s absence