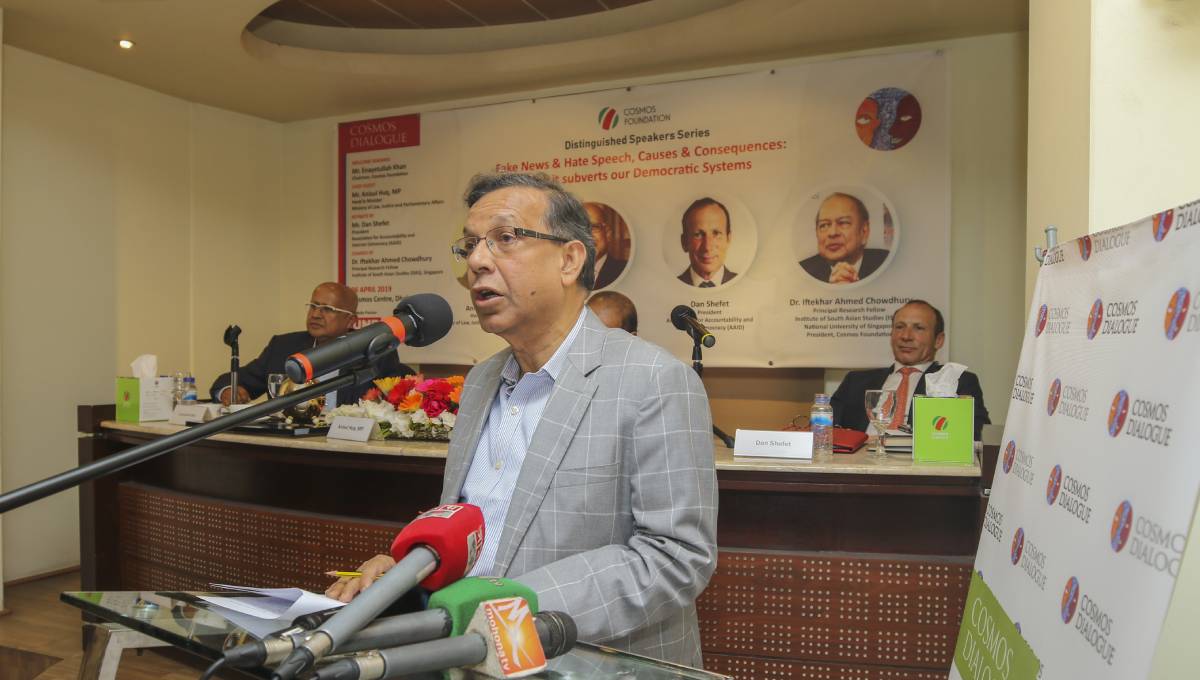 Photo: Law Minister Anisul Huq speaks as the chief guest at a symposium on fake news and hate speech; and its consequences at Cosmos Centre in Dhaka on Saturday, Apr 6, 2019.

Dhaka, Apr 6 : Law Minister Anisul Huq on Saturday sought the support of mainstream media outlets to fight against fake news saying that the government cannot successfully do the job alone.

“The mainstream media outlets have an important role to play alongside the government to stop the spreading and publishing of fake news,” he said while speaking as the chief guest at a symposium on fake news and hate speech; and its consequences at Cosmos Centre in the city.

The Law Minister laid emphasis on giving punishment and finding out the sources of incomes of those who are producing and spreading fake news intentionally.

“A newer technology needs to be developed to identify fake news because we’ve to face technology with technology. Social media platforms need to be brought under accountability, too,” said Minister Huq.

He also called for creating awareness among social media users mentioning that the users must have the primary idea about which is news and which is fake one.

“We need to think again and again before sharing any web link or news on social media platforms, including Facebook. Any accident might occur due to the sharing of any fake news, even if you share it subconsciously. No one of us can avoid this responsibility,” the Law Minister said.

He said if anyone shares fake news intentionally today there is no guarantee that he or she will not be a victim of such fake news tomorrow. “So, rumours can’t be spread seeing something on social media. We must wait with patience to make sure about the authenticity of the information.”

Minister Huq suggested the social media users to depend on credible media outlets if anyone thinks that he or she is not qualified enough to determine which one is fake and which one is authentic news.

“It’ll be a wise decision for you to depend on credible media outlets. And thus, the number of fake news posting will come down,” he added.

Describing such discussion as a powerful method, the Law Minister reiterated that they need to get together on an international level for combatting fake news as technology makes them trans-border crimes.

He highlighted the government’s initiatives to deal with fake news, including formulation of the Digital Security Act and the formation of Cyber Court.

The Law Minister said the mainstream media outlets should be faster in disseminating objective information so that readers do not have to depend on social media platforms.

“Media outlets need to come out from the tendency of hiding information or remaining silent. We need to keep in mind that the journey of fake news begins when the path to accessing the truth is stopped,” he added.

President of Association for Accountability and Internet Democracy (AAID) Dan Shefet, who is also an expert authority on European and IT Law, was the keynote speaker.