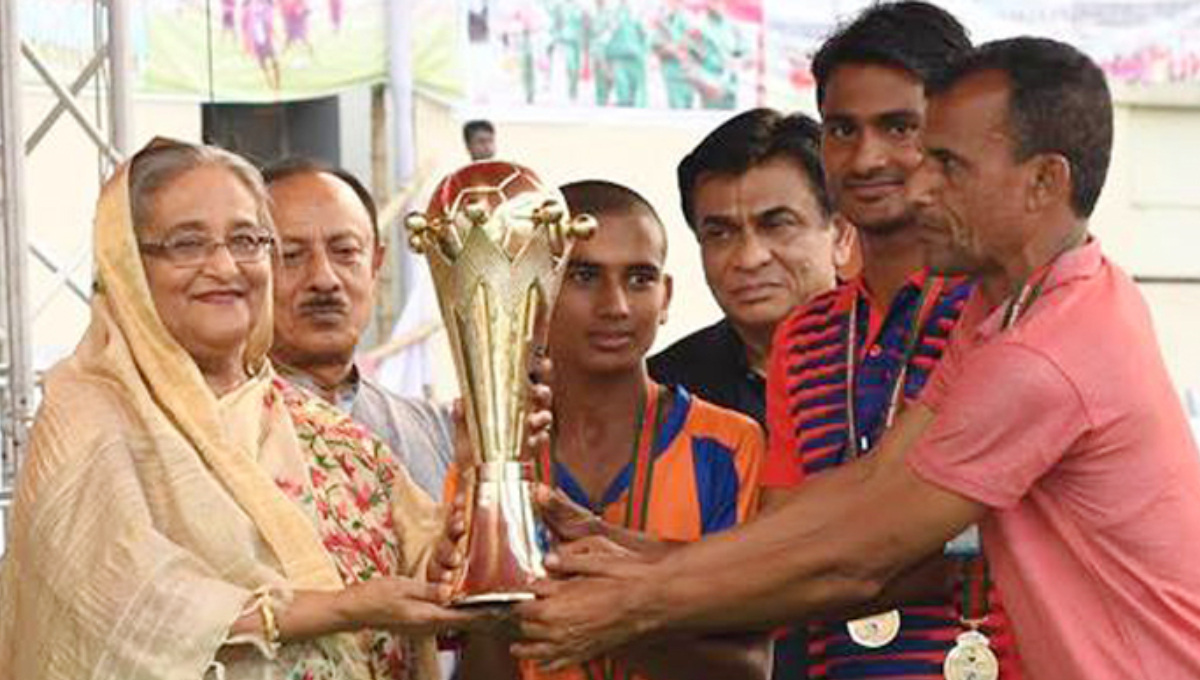 Prime Minister Sheikh Hasina gives away the trophy to the players on Thursday, Apr 4, 2019. Photo: Courtesy

Sports loving Prime Minister Sheikh Hasina witnessed the Bangamata Gold Cup final as the chief guest and later she distributed the trophies, medals and prize money to the champions, runners up and the 3rd ranked teams of both the competitions. State Minister for Primary and Mass Education Md Zakir Hossain was also present on the occasion.

Liba Akhter of Rangpur Division was adjudged the best player as well as the highest scorer (six goals) of the Bangamata Gold Cup to receive Tk 30,000 each for her feat in both the categories.

In the Bangabandhu Gold Cup, Anisul Islam Surjo of Rangpur Division was adjudged best player while Riaz Hossain of the same division named as the highest scorer (five goals) of the competition to receive Tk 30,000 each.

With the feat, Sylhet District won their 3rd Bangabandhu Gold Cup crowns along with Chittagong District. Rangpur won the title twice and Barishal won the rest one.

The champions teams of both the Bangabandhu and Bangamata Gold Cup football were awarded with prize money of Taka 3 (three) lakh each, the runners-up teams got prize money of 2 (two) lakh each while the third-place teams taka 1 (one) lakh each.

Besides, the team members and players of the champion team received prize money of Tk 15,000 each, the runners-up and third-placed teams got Tk 10,000 and 7,500 each respectively.