Game of Thrones makeup collections inspired by TV and film 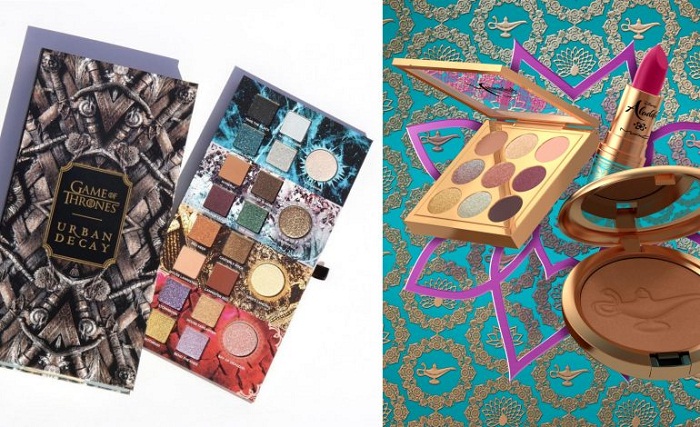 On-screen characters are the hottest new beauty influencers, if the recent spate of buzzworthy film and television-inspired makeup collaborations is anything to go by. As it is, both Sephora and Colourpop has recently released their own extra-special themed makeup. But there’s more. Here are three other beauty collections you won’t want to miss.

After weeks of teasing, cruelty-free cosmetics brand Urban Decay recently lifted the lid on its upcoming limited-edition Game Of Thrones collection, which now has a confirmed global launch date of April 14. The HBO series, which will unveil its eighth and final season this month, is being immortalized as a six-piece makeup collection inspired by the brand’s “favorite places in Westeros and the strong women of the Seven Kingdoms.” The line-up features a 3D pop-up eyeshadow palette divided into four sections to represent each house in the story, boasting 20 different shades, including shimmery and holographic finishes. There is also a “Mother of Dragons” highlighter palette, four lipsticks, three eye pencils, a lip and cheek tint and a pair of eye shadow brushes, all designed to fit into the show’s theme.

Ulta is celebrating the upcoming Avengers: Endgame film (which hits screens on April 24) with a brand-new makeup series dubbed “Ulta Beauty Collection X Marvel’s Avengers”. The retail giant is channeling a superhero vibe with a colourful collection spanning products for eyes, lips and face, including a 15-pan eyeshadow palette that includes shade names such as “Save the World”, “Legend” and “Built for Battle”, as well as a four-hued highlighter palette, four lip glosses and four liquid lip colors. A trio of makeup cases emblazoned with famous faces and symbols from the film franchise completes the lineup.
MAC Cosmetics

MAC Cosmetics is taking beauty fans on a magic carpet ride with its highly-anticipated Aladdin-themed makeup collection, thought to be slated for release around the time of the unveiling of Disney’s new live-action version of the classic story on May 24. The “Disney Aladdin Collection by MAC” highlights the self-determination and confidence of Princess Jasmine in the upcoming live-action adaptation, according to the brand. Fans can expect a powder blush compact, a hot pink bullet lipstick and an eyeshadow palette.