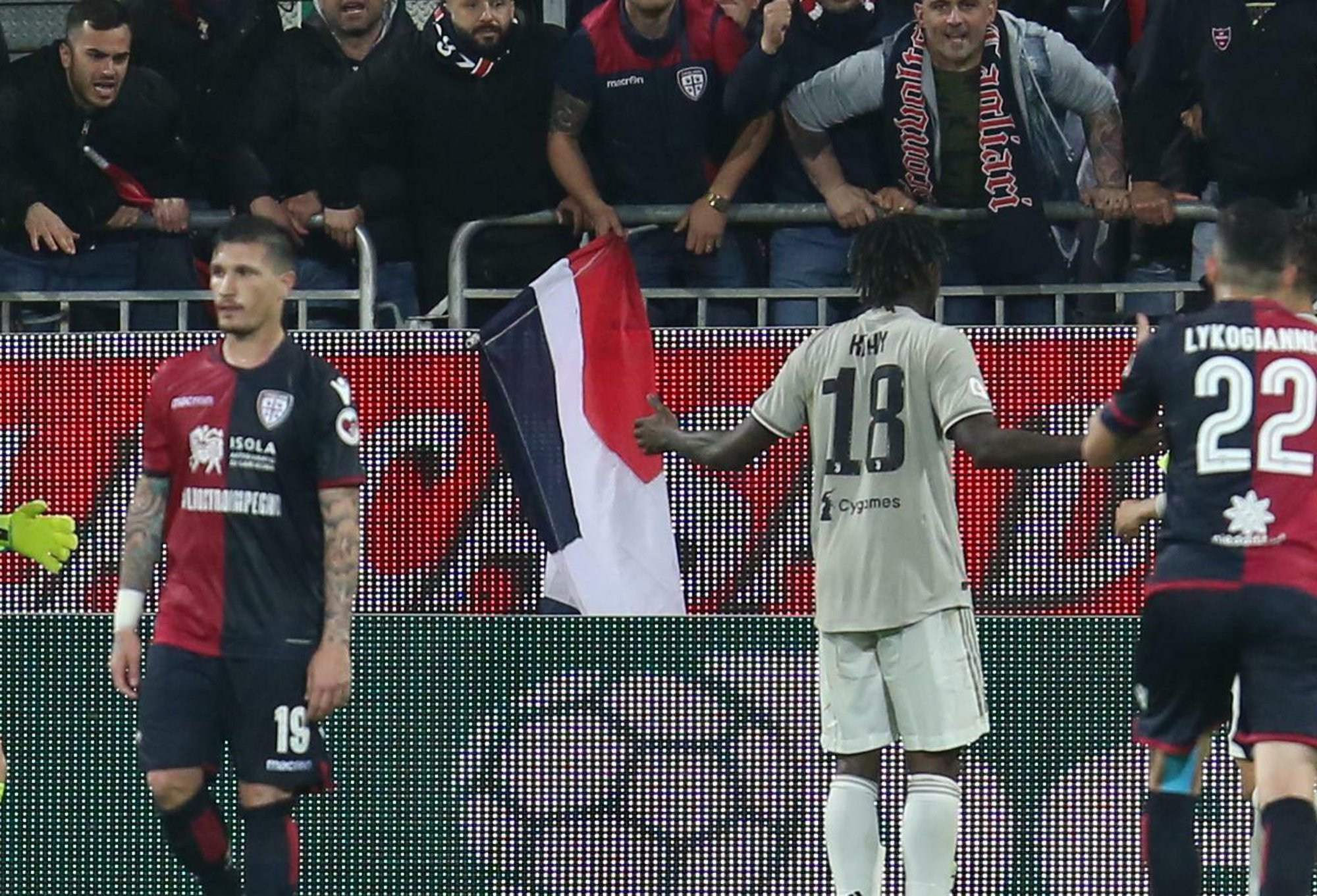 Photo: Cagliari fans shout to Juventus’s Moise Kean, center with back to camera, after he scored his side’s second goal during a Serie A soccer match between Cagliari and Juventus at the Sardegna Arena Stadium in Cagliari, Italy, Tuesday, April 2, 2019.

Milan, Apr 4 : A black player for Italy’s most popular soccer club won support from other European players Wednesday, a day after he was subjected to a torrent of racist abuse from an opposing team’s fans.

Juventus forward Moise Kean scored his team’s second goal against Cagliari late in the 2-0 victory Tuesday and stood in front of the home fans with his arms outstretched. That seemed to trigger a furious and openly racist outcry from the fans.

One of his teammates, Leonardo Bonucci, added fuel to the fire by saying Kean was partly to blame for the angry response. That prompted players on other teams to rush to Kean’s defense.

Manchester City winger Raheem Sterling, who is black, ridiculed the remark: “Leonardo Bonucci … All you can do now is laugh.” He also posted a screenshot on Twitter.

“I support every fight against racism, we’re all equal,” Manchester United midfielder Paul Pogba wrote in an Instagram post of Kean celebrating his goal. The Frenchman, who used to play for Juventus, then added, in Italian: “Good Italians wake up, you can’t let a small group of racists talk for you.”

Kean, a 19-year-old Italian whose parents are from Ivory Coast, was insulted by home fans during much of Tuesday’s game in Cagliari. He received a yellow card for faking an injury in the first half.

His goal and ensuing celebration seemed to push the home fans over the edge.

Cagliari captain Luca Ceppitelli tried to protect Kean, rushing to his side and pleading with the fans to stop. Instead, Ceppitelli was almost hit on the head by a bottle thrown from the stands.

In his comments partially blaming Kean, Bonucci said: “There were racist boos after Kean’s celebration and (Blaise) Matuidi got angry but I think the blame is 50-50.”

Matuidi, who is also black and won the World Cup with France last year, was subjected to racist abuse in Cagliari last year.

The incident involving Kean is but the latest example of racism in soccer this season. Last week, several England players were targeted with monkey chants during the team’s 5-1 victory in Montenegro.

Former Manchester City midfielder Yaya Toure, a four-time African player of the year from Ivory Coast, said players who are being targeted should walk off the field.

“Yeah, let’s do this,” Toure said at a UEFA conference on diversity in soccer. “When something like that happens we have to send a strong message.”

“After 24 hours I want to clarify my feelings,” he wrote. “I was interviewed right at the end of the game, and my words have been clearly misunderstood, probably because I was too hasty in the way I expressed my thoughts. Hours and years wouldn’t be enough to talk about this topic. I firmly condemn all forms of racism and discrimination. The abuses are not acceptable at all and this must not be misunderstood.”

Another teammate from both Juventus and Italy’s national team, Giorgio Chiellini, defended Kean in a story posted on the club’s website, calling him “a positive figure of Italian football.”

“The only thing he did wrong today was the simulation (faking injury), that he surely won’t repeat, but he’s here to learn,” Chiellini said. “He’s a very positive figure and he certainly didn’t deserve the insults he received.”

Kean, who scored in both of Italy’s qualifying matches for the 2020 European Championship, also won backing from Mario Balotelli — another black Italian born to African parents and who played for the country’s national team.

“And tell Bonucci that his luck is that I wasn’t there,” Balotelli wrote on Instagram. “Instead of defending you he does this? I’m shocked I swear. I love you brother!”

Kean hasn’t spoken publicly about the incident, but posted a photo of his goal celebration on Instagram.

“The best way to respond to racism,” Kean wrote, “#notoracism.”