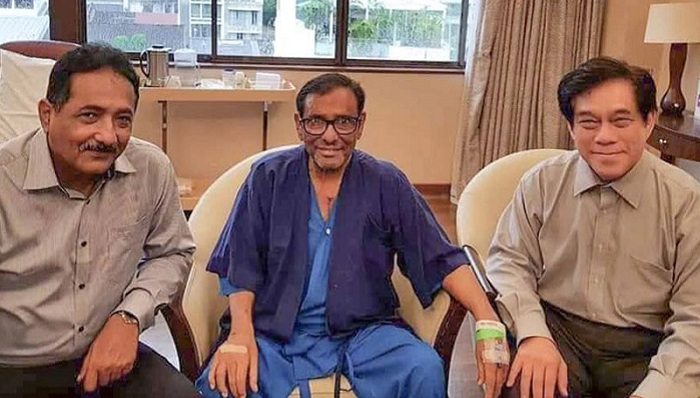 The health condition of ailing Obaidul Quader, general secretary of Awami League, is recovering gradually at a Singapore hospital. Now he can move normally as the endotracheal tube was removed from his body.

Sheikh Walid Foyez, an official of Bridge department, who has been staying with the ailing minister in Singapore, told about the present condition of Obaidul Quader on Monday morning.

Quader also the Road Transport Bridge minister has been going under treatment at Mount Elizabeth Hospital in Singapore since March 4 (Monday).

Foyez said that doctors had gradually reduced dosages of tranquilizer to him and he can now walk normally.

Dr Enamur Rahman, state minister of disaster and relief ministry, posted a photograph on Facebook showing Obaidul Quader with bandage on his left hand was sitting on a couch with two other persons.

Later, BSMMU doctors conducted angiogram test on him and found three blocks in his heart.

On March 4, he was shifted to Mount Elizabeth Hospital in Singapore by air ambulance.