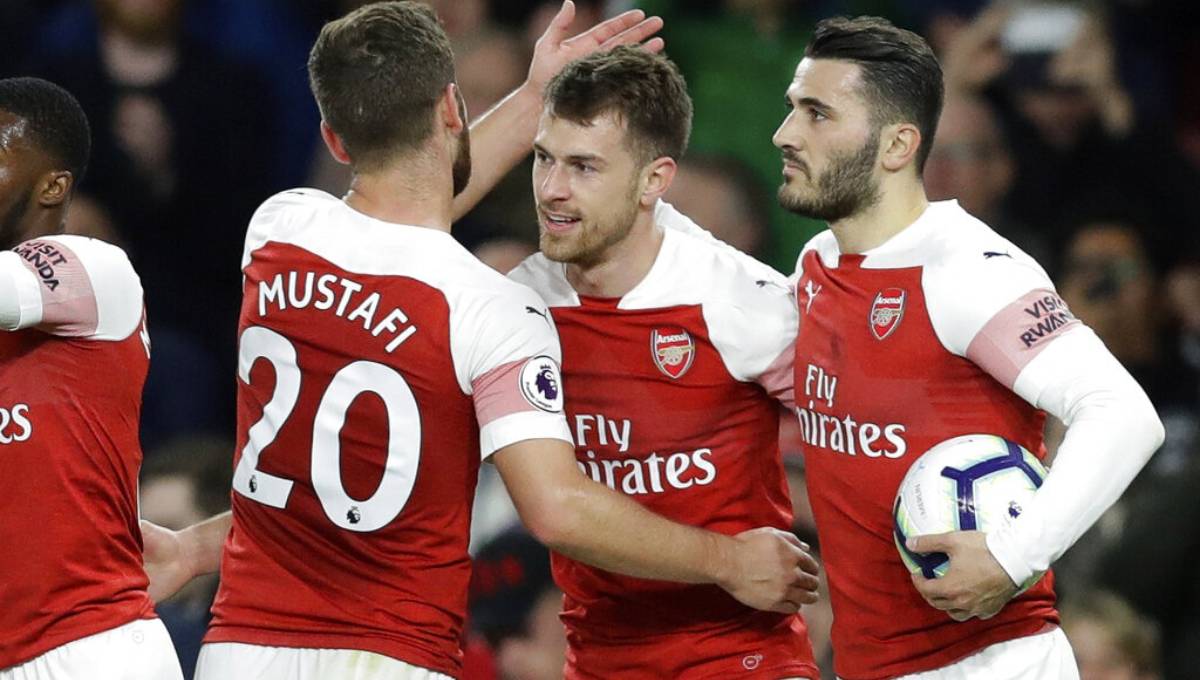 London, Apr 2 : Aaron Ramsey’s parting gift to Arsenal might just be helping the club back into the Champions League.

Ramsey scored in the 30th minute to set Arsenal on its way to a 2-0 win over Newcastle on Monday, lifting Unai Emery’s team above Tottenham and Manchester United and into third place in the Premier League.

Alexandre Lacazette added the second goal in the 83rd minute in a dominant performance at Emirates Stadium by Arsenal, which has won 10 straight home league games within a single season for the first time since May 1998.

Ramsey is leaving Arsenal after 11 years to join Juventus on a free transfer in July. He remains important to Emery, however, and was handed the armband against Newcastle in the absence of regular captain Laurent Koscielny, who was out injured.

He thought he had put Arsenal ahead in the 13th minute when he side-footed home a far-post finish after a corner was flicked on at the near post. However, the goal was disallowed because Sokratis Papastathopoulos was tugging the shirt of an opponent.

Ramsey got his goal soon after, though. He flicked a pass to Lacazette, who was dispossessed just inside the area. The ball ran loose and Ramsey pounced to send a first-time shot through the legs of Paul Dummett and in off the post from 15 meters.

His night ended prematurely when he picked up an injury in the 66th minute and immediately signaled to come off.

“I think Aaron Ramsey is happy,” Emery said. “He is helping us and is playing with a very good performance and scoring.”

At that stage, Newcastle was still in the game despite never seriously threatening Arsenal goalkeeper Bernd Leno, but Lacazette secured the win when he ran onto a header by Pierre-Emerick Aubameyang and lobbed the ball over goalkeeper Martin Dubravka.

Arsenal rose back into the Champions League qualification spots — the league’s top four teams go automatically into Europe’s top competition — and has possibly the most benign set of fixtures of the four teams that are chasing a top-four place behind title challengers Liverpool and Manchester City.

“I can feel the difference in the atmosphere from last season,” Lacazette said. “Now we can maybe go to the Champions League.”

Arsenal, which was 10 points behind Tottenham at the start of February, is now two points clear of its north London neighbor with seven matches still to play. Fourth-place Tottenham is tied on points with Manchester United in fifth, and Chelsea is a point further back.

Arsenal, last ahead of Tottenham at the end of a Premier League round on Dec. 2, could be affected by its involvement in the Europa League. It plays Napoli in the two-legged quarterfinals starting next week.

“We are at the most important moment of the season,” Emery said. “We are making progress in the table but we know it is difficult. Tottenham, Chelsea and Manchester United are going to win a lot of games.”

‘Bangladesh ready to share its best practices in population, development’