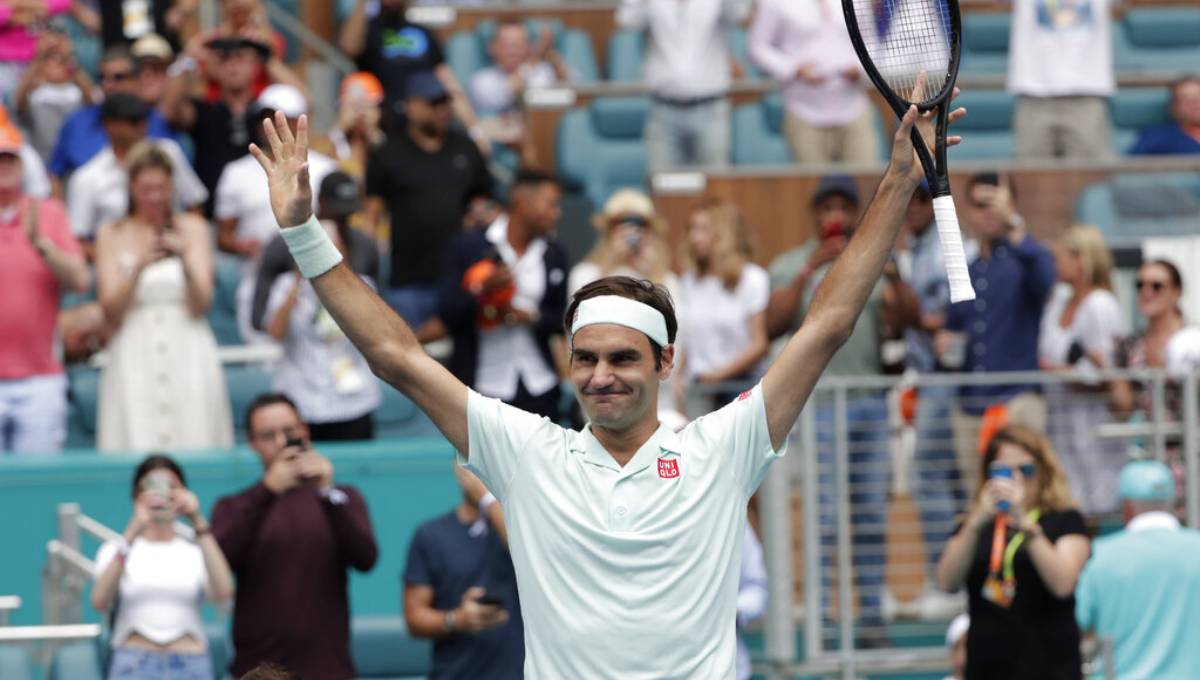 Miami Gardens, Apr 1 : Orange streamers rained down while Roger Federer held another championship trophy aloft, his familiar grin as wide as ever.

For the ageless Federer, winning never gets old.

Federer neutralized Isner’s big serve and won 32 of 35 points on his own serve. The 6-foot-10 Isner scrambled so desperately to stay in rallies that he hurt his left foot and limped badly through the final few points.

Isner said afterward he didn’t yet know the nature or severity of the injury.

Federer, by contrast, is just fine. He was the Dubai champion on March 2, and runner-up to Dominic Thiem at Indian Wells two weeks ago.

“This is a good phase, a good stretch for me right now,” Federer said. “I really feel super healthy. That’s why I have been able to play every day for the last four weeks. That’s something that maybe hasn’t always been the case for the last few years. So you appreciate these moments.”

“Unbelievable for you to keep winning and playing this level of tennis,” Miami tournament director James Blake, a former top-five player, told Federer at the trophy presentation. “It makes me feel like such an underachiever. We’re all just in awe.”

Isner also paid tribute to Federer during the ceremony.

The first 33 men’s and women’s titles in 2019 were won by 33 different players, including Ashleigh Barty in the Miami women’s final Saturday. Federer is the first repeat winner in 20 men’s tournaments this year.

Federer first played in the Miami tournament as a wild card 20 years ago. He won the title in 2005, 2006 and 2017 before it moved from Key Biscayne to its new home this year in the Dolphins’ complex.

“It has been a super long journey for me here,” Federer told the crowd. “To stand here right now really means a lot after so many years.”

The temporary stands inside the NFL stadium were almost full for the final, but Federer quickly defused any drama. He broke in the opening game and then twice more in a first set that lasted only 24 minutes.

“Champion, Roger!” one fan yelled during a lull, prompting cheers. Federer went on to earn the adjective yet again.

To complicate matters for Isner, he said the top of his foot started to hurt during the first set, and the problem grew worse as the match progressed.

“It’s a terrible feeling,” Isner said, “going up against the greatest player ever, playing in this incredible atmosphere, and my foot’s killing me.

“Not that I would have won the match anyway. Let’s make that clear. But, you know, I think I could have made for a more interesting match, and one that was a little more fun.”

Federer said he felt badly for Isner but didn’t let that affect his game.

“It was just important to keep on doing what I was doing, and if he’s hurt, well, then so be it, and bad luck for him,” Federer said. “After the game, of course, you hope it’s nothing serious .”

While Isner may need time to heal, Federer will begin preparations for the clay court season, which he skipped last year. He’ll play Madrid in May as a tuneup for the French Open.

“I’m not very confident going into this clay court season, I can tell you that, because I don’t even remember how to slide anymore,” Federer said. “I’m taking baby steps at this point. I’m very excited. It’s a good challenge, a good test. Confidence? It’s in no man’s land.”

In tennis, no man’s land is the area around the service line. Federer hits lots of winners from there.