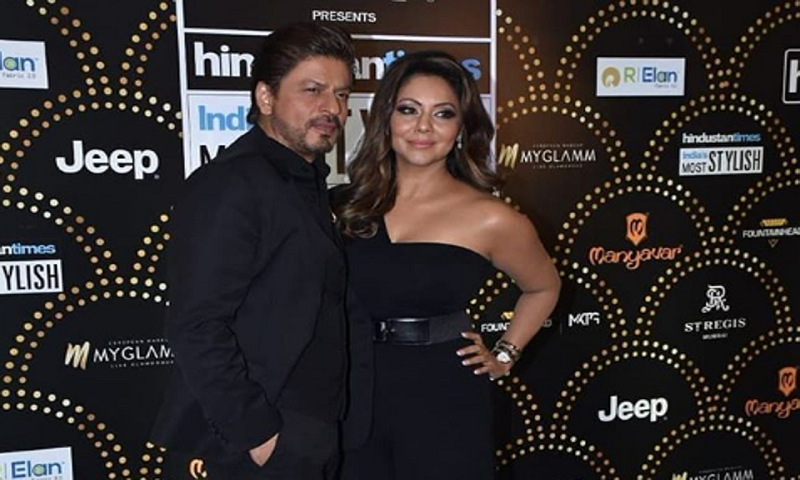 Actor Shah Rukh Khan and his wife and interior designer Gauri Khan won the HT Most Stylish Couple award at the HT India’s Most Stylish on Friday. The event, hosted at St Regis in Mumbai, saw the couple get all cute and cuddly as they posed together at the Black Carpet as well, report Hindustan Times.
Shah Rukh gave all credit for the win to his wife. “Everything I know about style is actually Gauri,” he said. “I am basic and boring and she brings in the beauty,” he said.

Gauri made a hilarious revelation about Shah Rukh and said that he takes much longer than her to get ready. “Every time we are stepping out, I am ready in 20 minutes but he takes 2-3 hours. Tonight, I put in a lot of effort and took three hours and he took six,” she said.

Host Vicky Kaushal also mentioned how they have been married for 27 years when Shah Rukh said, “Kya baat kar Raha hai, we have come as a young, stylish couple.” Vicky then pulled out some family old pictures Shah Rukh and Gauri and one of them showed them cuddling in Darjeeling. “I was very poor and Gauri was middle class when we shot this picture. I had promised to take her to Paris but I took her to Darjeeling and thought she will take it as Paris. This is our honeymoon in Darjeeling,” he said.

He also complained how Gauri doesn’t allow him to take pictures. “Gauri never allows me to take photos but now I am allowed to put one selfie with family,” he said. Gauri was quick to give her reasons for it. “The only reason I don’t let him take pics is because he takes so long to get ready. He doesn’t care how the family is looking,” he said.

Shah Rukh also danced with Radhika Apte to Aaj Ki Raat at the event. “Just to let you know, when Radhika was dancing to Aaj Ki Raat, I was looking behind if someone was actually coming, we can’t show so much realism,” he said.