May to quit once Brexit has been delivered 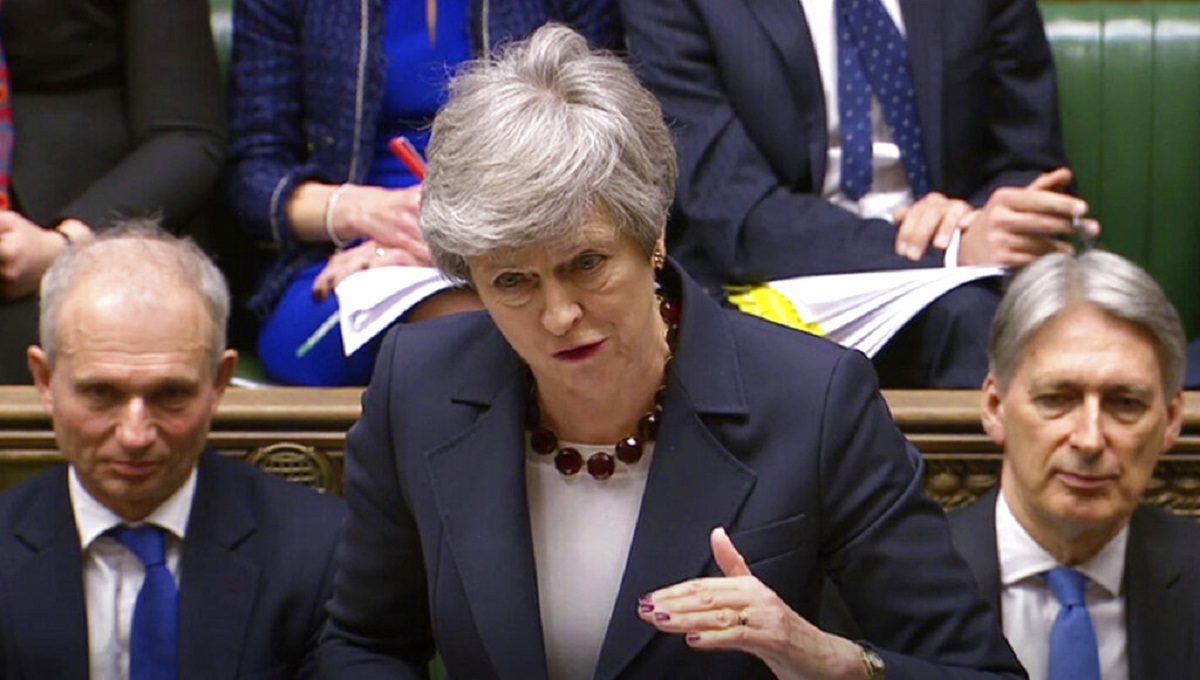 Photo : In this grab taken from video, Britain’s Prime Minister Theresa May speaks during Prime Minister’s Questions in the House of Commons, London, Wednesday March 27, 2019.

London, Mar 27 : U.K. Prime Minister Theresa May has told Conservative Party lawmakers that she will quit once the country has left the European Union — but she didn’t set a date.

Those will deal with Britain’s future relationship with the EU.

Britain was due to leave the EU on March 29 but May has got a short delay after her divorce deal with the EU was rejected overwhelmingly by lawmakers on two occasions.

Britain’s Brexit Secretary Stephen Barclay has put down a motion to have Parliament sit on Friday — the clearest sign yet the government plans to bring Theresa May’s European Union divorce deal back for a third vote.

Lawmakers in the House of Commons can sit on Fridays if they agree to do so.

He says “while I appreciate it may cause some inconvenience, I hope all members would agree that it’s better to have it and to not need it, than to need it and not have it.”

But it remains unclear whether the measure will be proposed. Commons Speaker John Bercow said Wednesday he would not accept another vote on the twice-rejected deal unless substantial changes were made.

British lawmakers will get to vote on eight widely differing options for the U.K.’s departure from the European Union.

House of Commons Speaker John Bercow selected the motions on Wednesday from 16 proposals submitted by lawmakers.

The ones to be considered include calls to leave the EU without a withdrawal deal, to stay in the EU’s customs union and single market, to put any EU divorce deal to a public referendum, and to cancel Brexit if the prospect of a no-deal Brexit gets close.

The “indicative votes” are intended to reveal if any kind of Brexit plan can command a majority in Parliament. Lawmakers have twice rejected Prime Minister Theresa May’s Brexit deal with the bloc.

The government has promised to consider the outcome of the votes, but not to be bound by them.

British Prime Minister Theresa May has faced more calls to resign during a bruising question-and-answer session in the House of Commons.

Before a vote by lawmakers on alternatives to May’s twice-rejected Brexit deal, opposition Labour Party leader Jeremy Corbyn accused May of being “unable to compromise and unable to reunite the country.” He told her she must “either listen and change course or go.”

May is also facing calls from inside her Conservative Party to quit so that another leader can take over the next stage of Brexit negotiations. She is due to meet Conservative backbenchers later Wednesday.

Asked whether she would be resigning in order to get her Brexit deal approved, May said: “It is my sense of responsibility and duty that has meant I have kept working to ensure Brexit is delivered.”

The leader of the House of Commons says Britain’s government still hopes to bring Prime Minister Theresa May’s European Union divorce deal back to Parliament for a vote this week.

Andrea Leadsom told the BBC on Wednesday that there is a “real possibility” the agreement will be considered on Thursday or Friday.

She says “we’re completely determined to make sure that we can get enough support to bring it back.” She added that the deal is the only way to guarantee Britain leaves the EU.

Some opponents say they may now vote for the deal amid fears parliamentary deadlock will lead to Brexit being delayed or abandoned.

Brexit supporter Jacob Rees-Mogg says May’s deal is still a bad one, but “the risk is, if I don’t back it, we don’t leave the EU at all.”

The chief of the European Union’s Council says the bloc should be open to welcome Britain at the European Parliament’s May 23-26 election even as it prepares to leave.

Referring to recent protests and petitions by pro-EU groups in Britain, EU Council President Donald Tusk told legislators Wednesday: “They may feel they are not sufficiently represented by the UK parliament but they must feel that are represented by you in this chamber. Because they are Europeans.”

He said it is “unacceptable” to think, as some do, that Britain should not take part in EU business as the country prepares to leave.

British lawmakers are preparing to vote on alternatives for leaving the European Union as they seek to end an impasse following the overwhelming defeat of the deal negotiated by Prime Minister Theresa May.

The House of Commons is scheduled to debate the various alternatives Wednesday, after which lawmakers will be asked to vote for all of the options they could accept. The most popular ideas will move to a second vote on Monday in hopes of finding one option that can command a majority.

The debate comes two days after lawmakers took control of the parliamentary agenda away from the government amid concern May was unwilling to compromise.

May has said she will consider the outcome of the “indicative votes,” though she has refused to be bound by the result.

9 killed as bus hit a microbus in Chattogram