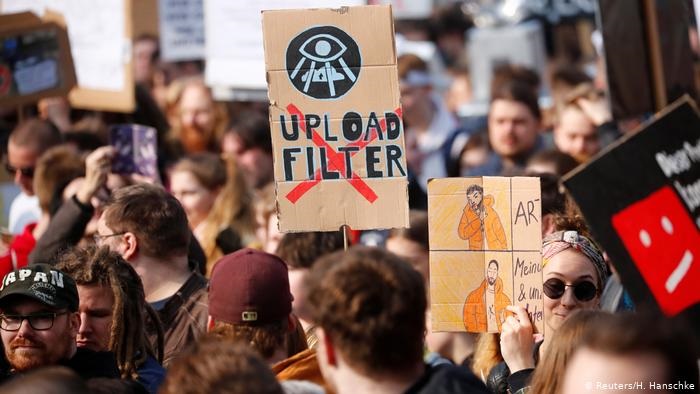 Lawmakers have backed a preliminary deal on a controversial new EU copyright law, which will force the likes of Google and YouTube to pay publishers for using their work. Critics fear for the freedom of the internet.

The European Parliament on Tuesday voted to approve a controversial new copyright law that hands more power to news publishers and record companies.

The deal brings measures that would make platforms such as YouTube and Facebook liable for copyrighted material on their sites one step closer to conclusion.

What is the reform?

The draft law, which passed with 348 votes in favor, 274 against and 36 abstentions, means:

German MEP Axel Voss, of Chancellor Angela Merkel’s conservative CDU party, said the reform “will not lead to censorship” but rather “create legal certainty on the use of copyright-protected material.”

Julia Reda of the German Pirate Party said the law would “undermine an entire generation’s trust in politics.”

European consumer organization BEUC also opposed the reform. “We fully support the aim of ensuring fair remuneration for creators, but this should not happen to the detriment of consumers,” said Monique Goyens, head of BEUC. “There is a very high risk that the new law will do more harm than good.”

How did we get here?

European copyright law dates back to 2001, and the European Court of Justice has long been calling for it to be modernised in line with the digital era. EU officials are aware of the fact that a lot of copyrighted material ends up online without the original owners being fairly remunerated.

Why it is controversial

Tuesday’s vote was the culmination of two years of bitter debate. Tech giants, which make huge profits from advertising on content they host, and supporters of a free internet opposed the reform. Critics fear this will lead to the installation of “upload filters.” Publishers and artists were in favor, as they sought a better return on the content they produce.

What are upload filters?

The automated software to detect the copyright-protected content is not compulsory, but likely the only method to process large amounts of data. However, they have a high error rate and could catch and delete legal content. Critics argue this would be a form of online censorship that hampers freedom of speech and creativity.

The run up to the vote saw much lobbying and protests by both supporters and opponents of the law. Tens of thousands of people protested in Germany on Saturday under the slogan “Save the internet.” There were similar protests in Austria, Poland and Portugal. Major Polish newspapers on Monday printed blank front pages in an appeal that MEPs adopt the reform.

EU member states must now formally approve the legislation. They have, however, already agreed to it in principle.