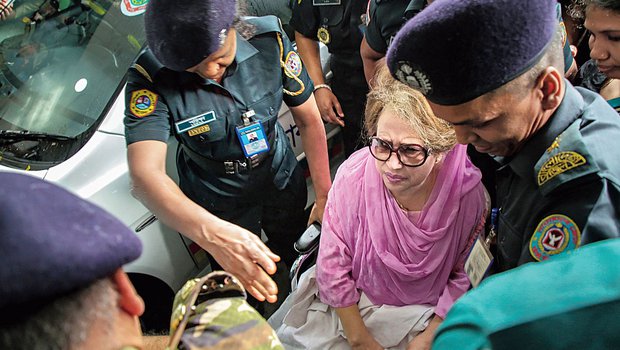 BNP on Wednesday alleged that its chairperson Khaleda Zia’s health condition has deteriorated as the prison authorities are not ensuring proper treatment to her in jail.

“Relatives, who visited the former prime minister Tuesday, said her condition has worsened,”

Fakhrul said, claiming that there was a plot to kill Khaleda in jail by denying her medical care.

Khaleda, a three-time former prime minister, has been in jail since February 8 last year after she was convicted in a corruption case.

Her five-year sentence was later doubled. The BNP chairperson was also convicted in a separate corruption case later that year.

The BNP claims the cases are politically motivated and that the government is trying to keep her away from politics – charges the government denies. The party contested the December-30 national election without her, in which the ruling Awami League won 96 percent seats in the 300-member assembly.

Unconditional release of Khaleda has been her party’s main demand ever since her incarceration.

Fakhrul said the BNP chief is so ill that she cannot move independently. “She’s also complaining of pain in different parts of her body,” he said.

The BNP leader alleged that the medical board formed at the High Court’sorder is not ensuring her treatment.

He also expressed concerns as the government has not taken any step to shift Khelada to any specialised hospital for treatment even after BNP’sMarch 4 meeting with the home minister.

Fakhrul demanded the BNP chief be treated at a specialised hospital. “If anything happens to her, the government, the jail authorities and the home ministry will have to take the responsibility,” he said.