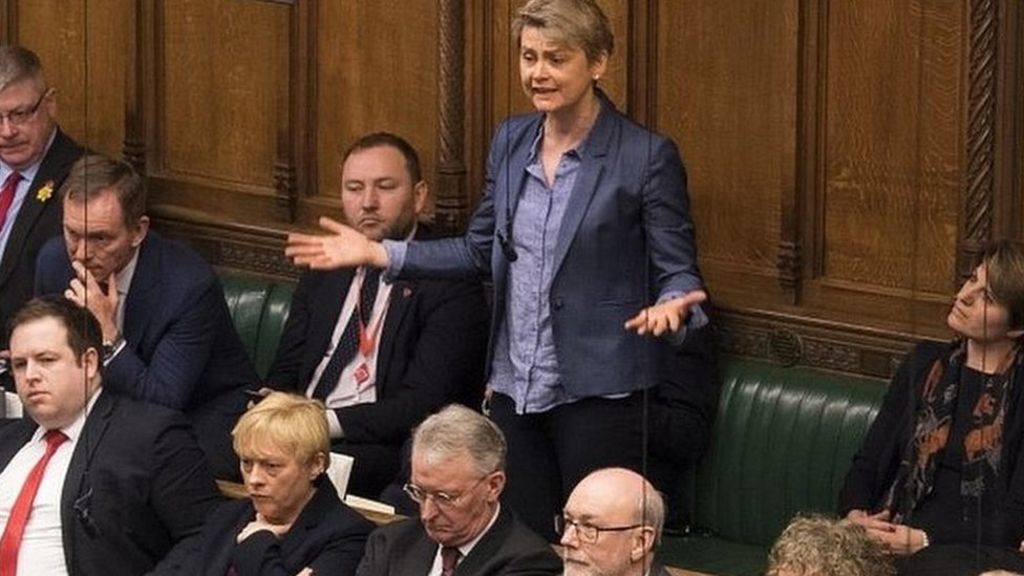 London, Mar 27 : MPs have set out details of their plan to consider other Brexit options, as Theresa May was warned more ministers could quit unless she changes course, reports BBC.

The Commons will begin voting on alternatives on Wednesday, in a process likely to continue into next week.

MPs will fill out a series of ballots testing support for different ideas.

As MPs seek to take the initiative from the government, there are signs that some Tory opponents of Mrs May’s deal could be steeling themselves to back it if it returns to the Commons for a third time later this week.

Prominent Brexiteer Jacob Rees-Mogg indicated that he could be persuaded, given it now appeared to be a choice between her deal and no Brexit at all.

Ex-Foreign Secretary Boris Johnson told the BBC there was “no point” supporting Mrs May’s deal “without any sign the UK is going to change its approach in phase two” of the negotiations – otherwise he feared the country would be indefinitely tied to the EU’s rules.

But BBC political editor Laura Kuenssberg said the not very subtle subtext of Mr Johnson’s remarks was “if the PM promises to go soon, then she might get my vote.”

MPs took the unprecedented step of voting to seize control of the parliamentary timetable on Monday, in an attempt to end the deadlock over the terms of the UK’s exit.

Groups are now putting forward a variety of different options for the UK’s future relationship with the EU.

Several of these are based on the assumption that the existing withdrawal agreement with the EU will be approved, albeit with changes to the controversial Northern Ireland backstop.

Others call for a basic free trade agreement with the EU and another referendum on whether Brexit goes ahead. It will be up to Commons Speaker John Bercow to decide what is voted on.

What are some of the options?

Customs union: This calls for the UK to negotiate a new customs union with the EU immediately after it leaves.

Common Market 2.0:The UK would remain in the single market by rejoining the European Free Trade Association (EFTA) and staying in the European Economic Area (EEA). A “comprehensive customs partnership” would replace the Irish border backstop plan. It would accept continued freedom of movement but with conditions.

EFTA and EEA: The UK would rejoin EFTA and sign up to existing EEA rules and obligations but make them enforceable through the UK courts. Rejects any customs union with the EU, instead seeking agreement on new arrangements for Northern Ireland.

Malthouse compromise plan A: Mrs May’s withdrawal deal but without the backstop, which would be replaced by alternative arrangements.

Another referendum: The public would vote on any Brexit deal which is passed by Parliament before it is ratified.

Revoke Article 50: If the government has not passed its withdrawal deal, MPs would vote on a no-deal Brexit two days before the UK’s leaving date. If MPs reject no deal, the prime minister would have to cancel Brexit altogether.

According to a copy of a business motion released by Labour’s Hilary Benn, there will be about five hours of debate on different options.

Voting by paper ballot will take place at about 19:00 GMT, with the results announced by Mr Bercow later that evening.

The process is likely to continue on Monday as MPs seek to whittle down options which could command majority support in Parliament.

The government has until 12 April to propose a different way forward to the EU if it cannot get the current agreement through Parliament.

There is a very strange mood around the place in Westminster, ahead of what could be a very messy and tricky day tomorrow.

MPs will spend much of Wednesday voting on different versions of Brexit. But the government is even at odds with itself over whether they should be given free rein to do so.

One source told me 19 ministers are ready to quit if they aren’t allowed to have their say, which could, hypothetically at least, collapse the government itself.