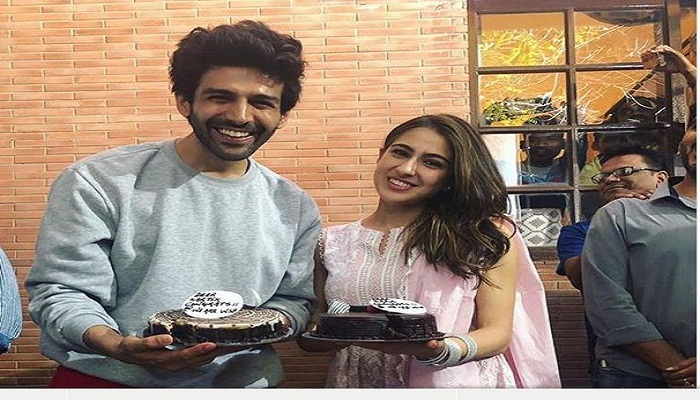 Sara Ali Khan and Kartik Aaryan have been preoccupied with Imtiaz Ali’s new film, which is said to be the sequel to Love Aaj Kal, in the National Capital but now, it’s a schedule wrap.

The curtains were drawn on the Delhi schedule on a celebratory note for both Sara and Kartik and the film’s team organised for a close-knit party to celebrate Kartik’s win at the Zee Cine Awards and Sara’s first Filmfare Award.

Kartik Aaryan shared photos from the party and wrote: “Celebrating Sara’s Filmfare Award and my win at the Zee Cine Awards. Thank you, Imtiaz Ali sir and Window Seat Films for making our win more special by this surprise celebration. Such a sweet and thoughtful gesture.”

Meanwhile, Sara Ali Khan also Instagrammed a goofy video, also featuring Kartik, and wrote: “And that’s a schedule wrap for me in Delhi.”

Sara Ali Khan won the Best Debut Actress Filmfare Award for her performance in Kedarnath. This is how she celebrated her win on Instagram: “Thank you, Filmfare for giving me this honour- being able to kiss the black lady is truly surreal. Team Kedarnath this one is for each and every one of you. Thank you for making my dream come true. Jai Bholenath!”

Govt aims to reach benefits of independence to villagers: PM