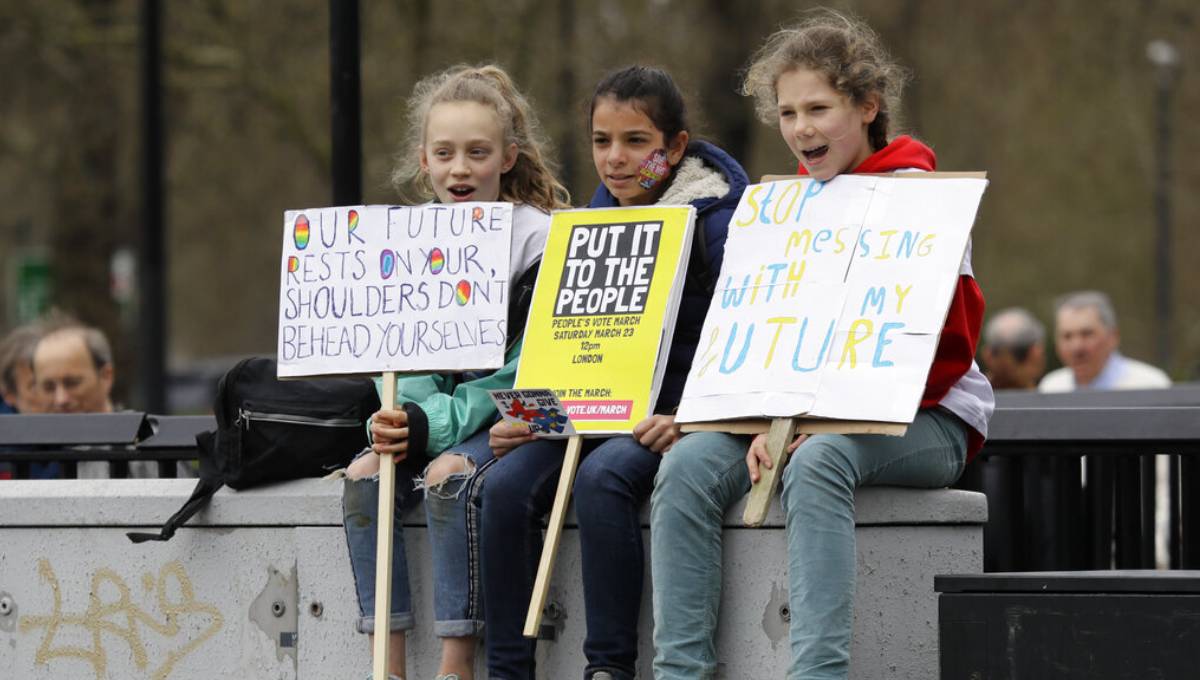 Photo: Children wait for the start of a Peoples Vote anti-Brexit march in London, Saturday, March 23, 2019.

London, Mar 24 : Anti-Brexit protesters flooded into central London by the hundreds of thousands, demanding that Britain’s Conservative-led government hold a new referendum on whether Britain should leave the European Union.

The “People’s Vote March” on Saturday snaked from Park Lane and other locations to converge on the U.K. Parliament, where the fate of Brexit will be decided in the coming weeks.

Marchers carried European Union flags and signs praising the longstanding ties between Britain and continental Europe. The protest drew people from across Britain who are determined to force Prime Minister Theresa May’s government to alter its march toward Brexit.

Independent legislator Chuka Umunna and others supporting a second Brexit referendum estimated the crowd at 1 million.

Around 100 British expats have rallied in the Spanish capital against Britain leaving the European Union.

The protesters chanted slogans against Brexit and many also held up homemade signs, including “17,410,742 people need a good spanking,” in reference to the number of Britons who supported leaving the EU in a 2016 vote.

The gathering in Madrid’s Margaret Thatcher Plaza on Saturday comes before what is expected to be a massive march in London in favor of a second Brexit referendum.

Protesters are gathering in central London before what is expected to be a massive march in favor of a second Brexit referendum.

The march will conclude outside Parliament, where the fate of the Brexit plan hangs in the balance.

Organizers are hoping to convince lawmakers to back a new referendum on whether Britain should follow through on plans to leave the European Union.

Britain opted to leave in a 2016 referendum, but the process has been stalled by political discord.

Tom Watson, the deputy leader of the opposition Labour Party, London Mayor Sadiq Khan and other political figures are scheduled to address the crowd.

Labour Party leader Jeremy Corbyn is not expected to attend. He has not been a strong supporter of the movement seeking a second vote.

British Prime Minister Theresa May has told lawmakers she may not seek passage of her Brexit withdrawal plan in Parliament next week.

The embattled leader wrote to lawmakers Friday night saying she would bring the bill back to Parliament “if it appears that there is sufficient support.”

She also says she would need the approval of House Speaker John Bercow to bring the plan back for a third time despite his objections.

Lawmakers have twice rejected the deal. Britain is scheduled to leave the European Union on April 12 if no deal is approved.

She told lawmakers Britain still has options including an extension that would require taking part in European Parliament elections in May.

In a conciliatory note, she also offered to meet with lawmakers to discuss Brexit policy.