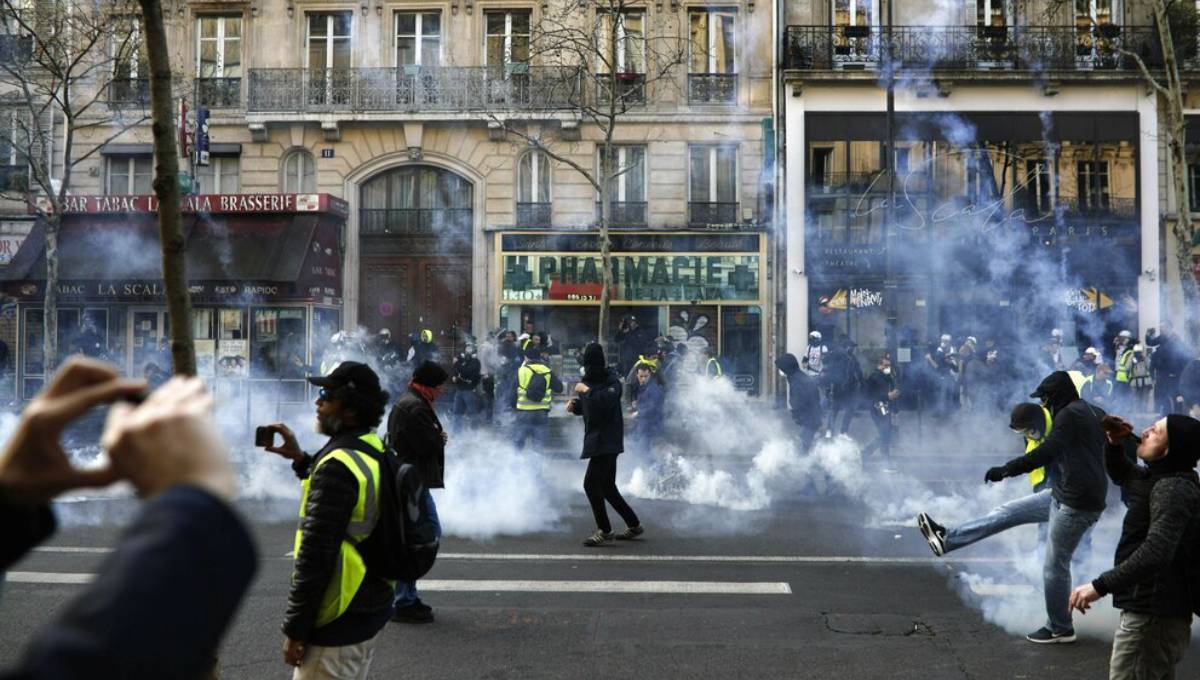 Photo: Teargas is used to disperse demonstrators during minor clashes with police in Paris, Saturday, March 23, 2019.

Paris, Mar 24 : Scattered yellow vest protesters clashed with French police firing tear gas Saturday after a peaceful march through Paris, but tougher security measures and protest bans in high-risk neighborhoods prevented the kind of rioting that devastated the capital a week ago.

The 4-month-old movement drew bigger crowds Saturday than in recent weeks, despite heavy security and even though last weekend’s violence dented overall support for the cause. The protesters want more help for struggling French workers and retirees and say President Emmanuel Macron favors the elite.

Thousands of demonstrators marched peacefully through Paris – their 19th straight weekend of protests – ending up at the Sacre-Coeur Cathedral overlooking the city from the historic Montmartre neighborhood.

Protesters sprayed yellow flares and unfurled a neon banner from atop the cathedral’s white dome. In a relaxed mood, demonstrators and tourists alike took selfies as the march wound down.

A police officer on the plaza suffered a heart problem, slumping to the ground before being hospitalized in what Paris police described as a “very serious” condition. Associated Press journalists at the scene saw no violence or incidents nearby when he collapsed.

Elsewhere in France on Saturday, small groups of demonstrators and police clashed in the southern French cities of Nice and Montpellier. Nice was placed under high security measures as Chinese President Xi Jinping is expected to stay overnight on Sunday as part of his state visit to France.

Overall though, Saturday’s protests were calmer than a week ago, when resurgent violence reminded France’s government that they’ve failed to quell yellow vest anger. Luxury shops were looted and ransacked last weekend around the Champs-Elysees Avenue in Paris and some were set on fire by protesters.

This week, Interior Minister Christophe Castaner estimated that 40,500 people took part in protests around France, up from 32,300 a week ago. This week’s protests were more spread out, with just 5,000 estimated in Paris compared to 10,000 last Saturday.

Some 233 people were arrested, including people trying to come to Paris to protest with baseball bats, slingshots and other potential weapons, Castaner said.

French authorities banned protests from the Champs-Elysees Avenue in Paris and the central neighborhoods of several other cities including Bordeaux, Toulouse, Marseille and Nice in the south, and Rouen in western France.

The Champs-Elysees was almost empty Saturday except for a huge police presence. Fear of more violence certainly kept tourists away, and police shut down the Champs-Elysees subway stations as a precaution.

That decision prompted criticism from opposition leaders and some protesters.

“Since when do soldiers face a population? We are here in France. You would say that we are here in (North) Korea or in China. I never saw something like this,” said Christelle Camus, a protester from a southern suburb of Paris.

Polls suggest last week’s violence dampened public support for the yellow vests – but that a majority of French people still agree with the protesters’ anger over France’s tax system and Macron’s leadership.

“We come to protest in a calm manner. We have the right to express ourselves, to say that we want to live (decently),” said Celine Dutry, who came to Paris to protest from the northern city of Amiens – Macron’s hometown. “We are not jealous of the rich.”

The protests started in November to oppose fuel tax hikes but have expanded into a broader rejection of Macron’s economic policies, which protesters say favor businesses and the wealthy over ordinary French workers. Macron countered by dropping the fuel tax hike and holding months of discussions with the public on France’s stagnant wages, high taxes and high unemployment.

The yellow vest movement was named after the fluorescent garments that French motorists must carry in their vehicles for emergencies.