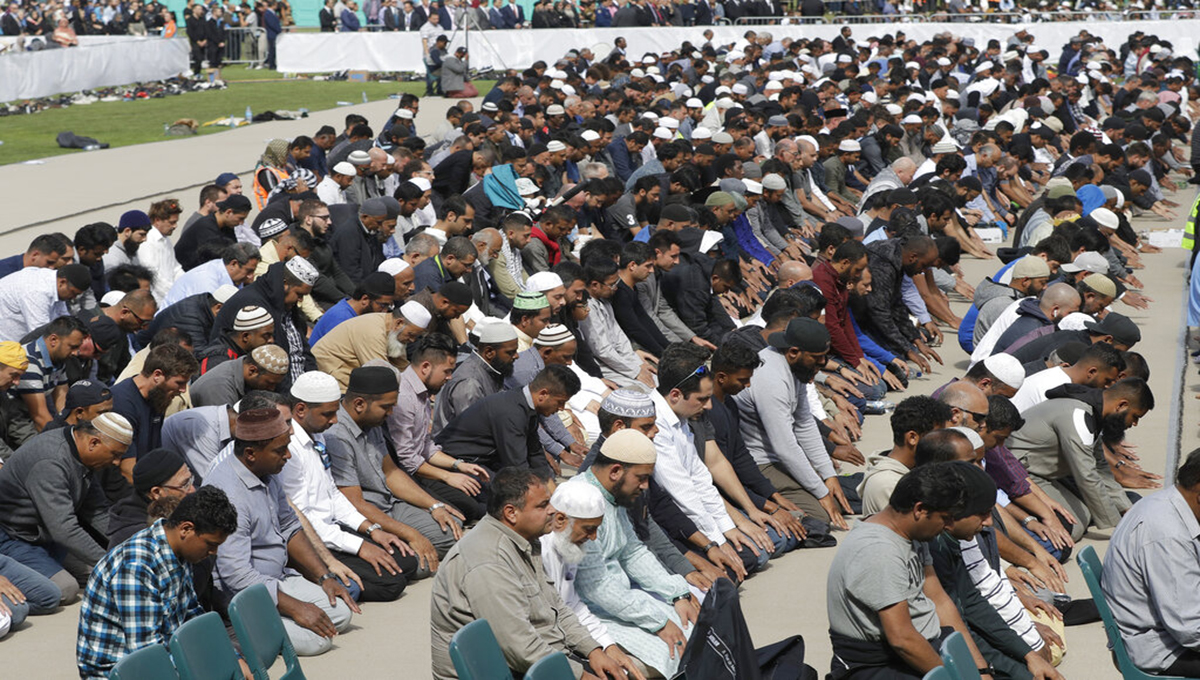 Photo: Muslims pray during Friday prayers at Hagley Park in Christchurch, New Zealand, Friday, March 22, 2019. People across New Zealand are observing the Muslim call to prayer as the nation reflects on the moment one week ago when 50 people were slaughtered at two mosques.

New Zealand, Mar 22 : Thousands of people have gathered for a mass funeral to bury 26 of the victims of the mosque attacks in Christchurch, New Zealand.

The funeral is taking place at a Muslim cemetery where more than a dozen of the 50 killed last week already have been laid to rest.

Family members took turns passing around shovels and wheelbarrows to bury their loved ones.

The burials come hours after thousands gathered in a Christchurch park for Friday prayers, including Prime Minister Jacinda Ardern.

Friday’s burials also include the youngest victim of the attacks, 3-year-old Mucaad Ibrahim.

An Australian national security official says security agencies are increasing their “scrutiny and pressure” on white supremacists after the New Zealand mosque attack.

Home Affairs Department chief executive Mike Pezzullo told a Senate committee on Friday that Australian agencies were working to assist the New Zealand investigation into the Australian man arrested in the killings of 50 worshippers in two Christchurch mosques last week.

Brenton Tarrant espoused white-supremacist views in a manifesto describing his plans for the attack, and racist imagery was seen in his livestreamed footage.

Pezzullo said the Home Affairs Department stood resolutely against white supremacy and he addressed its adherents in saying,” The scrutiny and pressure that you are under will only intensify.'”

People across New Zealand are observing the Muslim call to prayer as the nation reflects on the moment one week ago when 50 people were slaughtered at two mosques.

Prime Minister Jacinda Ardern and thousands of others congregated in leafy Hagley Park opposite the Al Noor mosque in Christchurch to observe the call to prayer early Friday afternoon.

Thousands more were listening in on the radio or watching on television as the event was broadcast live. The prayer was followed by two minutes of silence.

The observance comes the day after the government announced a ban on “military-style” semi-automatic firearms and high-capacity magazines like the weapons that were used in last Friday’s attacks.

Imam says New Zealand is broken-hearted but not broken