Shark-faced jet lands at Dhaka airport for the first time 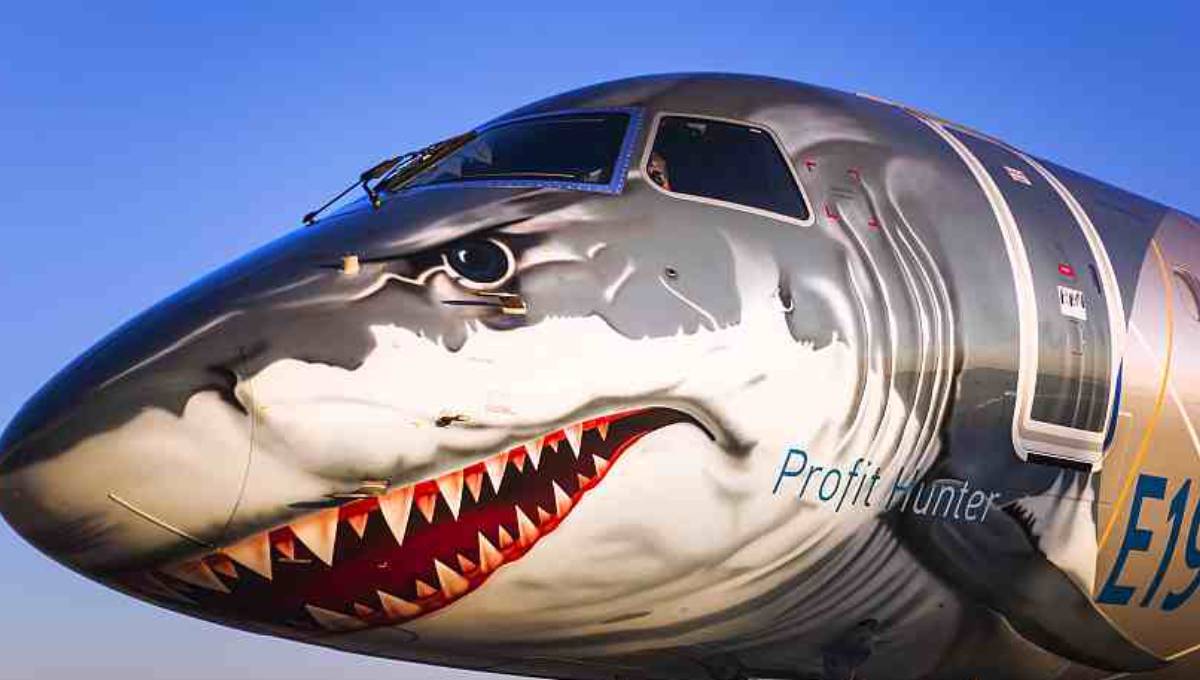 The test flight arrived here around 12:31 after flying from Indira Gandhi Int’l Airport in New Delhi, India for flying around one hour and 37 minutes, according to the flight chart.

Sporting a shark livery to represent the aircraft’s ‘profit hunter’ status, the aircraft will offer Embraer’s guests a closer look at the world’s quietest, cleanest and most efficient new-generation single-aisle aircraft.

“We are proud to bring this aircraft to the region for the second time to show the amazing capabilities of the E190-E2,” said Cesar Pereira, Asia Pacific Vice President, Embraer Commercial Aviation.

“The E190-E2 offers airlines the benefit of lower operating costs and is capable of achieving similar costs per seat of larger re-engined narrowbody aircraft, with significantly lower costs per trip. We have also received a lot of positive feedback about the aircraft performance, low fuel consumption, sleek and modern interior and low cabin noise and we are excited to show it to a wider audience.”

Delivered to its launch customer in April last year, and now operated by two airlines Norway’s Widerøe and Kazakhstan’s Air Astana, the E190-E2 has gained a reputation in the industry for having met all its milestones ahead of schedule, and with final specifications better than the originally expected.

The E-Jets E2’s value proposition in the Asia Pacific region is its ability to enable airlines to sustainably develop more routes secondary or tertiary cities. These are routes that can potentially bypass the major metro airports such as Manila, Jakarta, Bangkok, New Delhi and Mumbai which are heavily congested.  This enables airlines to achieve sustainable growth without being constrained by infrastructure bottlenecks, while offering passengers improved services with more non-stop flights.

Embraer forecasts a demand for 10,550 new aircraft with up to 150 seats worldwide, worth USD 600 billion, over the next 20 years, more than 3,000 of which will origin from the Asia Pacific region, including China.

Embraer is the world’s leading manufacturer of commercial jets with up to 150 seats. The Company has 100 customers from all over the world operating the ERJ and the E-Jet families of aircraft. For the E-Jets program alone, Embraer has logged more than 1,800 orders and 1,400 deliveries, redefining the traditional concept of regional aircraft by operating across a range of business applications. The first-generation E-Jets are operated by 70 airlines in 50 countries. This includes all the mainline US carriers, KLM, Air France, Lufthansa, British Airways, Tianjin Airlines, China Southern Airlines, Japan Airlines and Mandarin Airlines.

The E-Jets E2 is the most efficient family of aircraft in the single-aisle market burning up to 10% less fuel than its direct competitor. The E190-E2 brings also more flexibility with maximum range of up to 5,300 km or about 1,000 km longer than the first-generation E190.

In January 2018, as the aircraft neared the end of its flight test campaign, final results showed that the aircraft is better than its original specification and even more efficient than other single aisle aircraft. In fuel consumption, the E190-E2 proved to be 1.3% better than originally expected, which represents a 17.3% improvement when compared to the first-generation E190. In terms of pilot transition, pilots of the first-generation E-Jets will need only 2.5 days of training and no full flight simulator to fly an E2.

Flight test results also confirmed the E190-E2 to be better than its original specification in takeoff performance in hot-and-high conditions as well as short field takeoff.

E190-E2 also becomes the aircraft with the longest maintenance intervals in the single aisle market with 10,000 flight hours for basic checks and no calendar limit in typical E-Jets utilization. This means additional 15 days of aircraft utilization in a period of ten years compared to the first-generation E-Jets.

Embraer is a global company headquartered in Brazil with businesses in commercial and executive aviation, defense & security. The company designs, develops, manufactures and markets aircraft and systems, providing customer support and services.

Since it was founded in 1969, Embraer has delivered more than 8,000 aircraft. About every 10 seconds an aircraft manufactured by Embraer takes off somewhere in the world, transporting over 145 million passengers a year.

Embraer is the leading manufacturer of commercial jets up to 150 seats. The company maintains industrial units, offices, service and parts distribution centers, among other activities, across the Americas, Africa, Asia and Europe.