Bangladesh plans to set up ‘South-South Knowledge and Innovation Centre’, he says 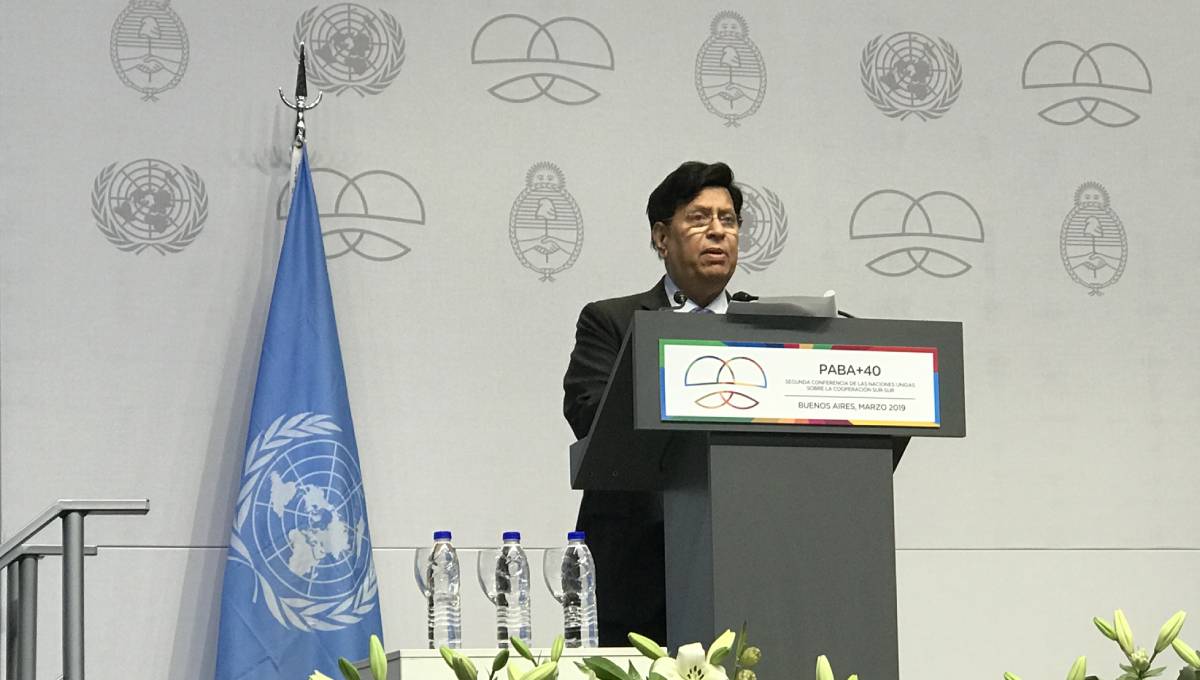 Dhaka, Mar 21 : Bangladesh Foreign Minister Dr AK Abdul Momen has underscored the importance of South-South Cooperation (SSC) in the implementation of the 2030 Agenda in developing countries.

“I may recall here that Bangladesh highlighted the importance of SSC in the implementation of the 2030 Agenda even before its adoption in the ‘High Level Meeting on South-South and Triangular Cooperation in the post Development Agenda: Financing for Development in the South and Technology Transfer’ that it hosted in Dhaka in May 2015”.

The minister said this while delivering country statement at the plenary meeting of the Second UN High-Level Conference on South-South Cooperation in Buenos Aires, Argentina on Wednesday.

He also said that Bangladesh has included the SSC in its National Policy for Development Cooperation (NPDC), such as in various programmes and platforms under the Access to Information (A2I).

The minister also announced that Bangladesh is planning to set up a “South-South Knowledge and Innovation Centre” which would provide a platform to it and other countries to co-create solutions addressing challenges they face in advancing technology transformation, particularly emanating from 4IR, share their innovative practices and identify experiences which could be transferred, replicated and scaled up.

To strengthen and further invigorate South-South Cooperation, the UN General Assembly is convening this high-level conference on SSC on the occasion of the fortieth anniversary of the adoption of the Buenos Aires Plan of Action (BAPA) for Promoting and Implementing Technical Cooperation among Developing Countries.

The High-level Conference is being hosted by Argentina which commenced on Wednesday and will continue till Friday.

Bangladesh has been elected as one of the Vice Presidents of the Conference. The Minister also chaired the high-level plenary meeting for a while.

When delivering his speech, the Foreign Minister shared some thoughts and plans of Bangladesh to promote SSC including proposal to establish a forum of Development, Finance, Economic and Foreign Ministers of the South to discuss, dialogue, and explore the potentials as well as the critical issues of the South in the context of achieving the SDGs.

Mentioning that the Diaspora of the South, which possesses wealth of knowledge and experience, is expanding across the globe, the FM stressed upon that SSC should provide them a platform to work closely in their countries of origin and play a more meaningful role in their development.

Recognizing SSC as an effective cooperation mechanism in the development trajectory of Bangladesh, the Foreign Minister said, “Under the leadership of our Prime Minister Sheikh Hasina, we are now implementing our national development Vision 2021 to see ourselves as a middle-income country and Vision 2041 to transform the country into a ‘Sonar Bangla”, a developed one. We are in the process of graduation from the LDC category and we are conscious that this transition would make us face a new set of development challenges as a middle-income country. As we embark on that journey, we wish to harness the potential of SSC to address our huge development needs and challenges”.

He also urged the member states of SSC to come forward for strengthening strategic partnership through the framework of South- South and Triangular Cooperation.

Prior to delivering the country statement, the Minister attended a side event titled “A Glimpse of the future South-South and Triangular Cooperation: Asia-Pacific’s contribution in Science, Technology and Innovation” at University of Buenos Aires, jointly hosted by A2I and UNOSSC.

In this side event the Foreign Minister enumerated the achievements of the government of Sheikh Hasina in science, technology and innovation and urged South-South and Triangular Cooperation to offer more collaboration among the developing countries and the development partners in the areas of knowledge, experience, best practices, training, capacity building and technology transfer as well as mutual learning and the coordination of STI policies and strategies towards achieving sustainable development.

In those bilateral meetings, he and his counterparts exchanged views and ideas and shared their respective country’s development endeavors. PGA praised Bangladesh’s generosity for providing shelter and humanitarian support to the forcibly displaced Rohingyas from Myanmar. She also lauded Bangladesh’s indomitable success in social and economic development and its proactive role in climate change negotiations.