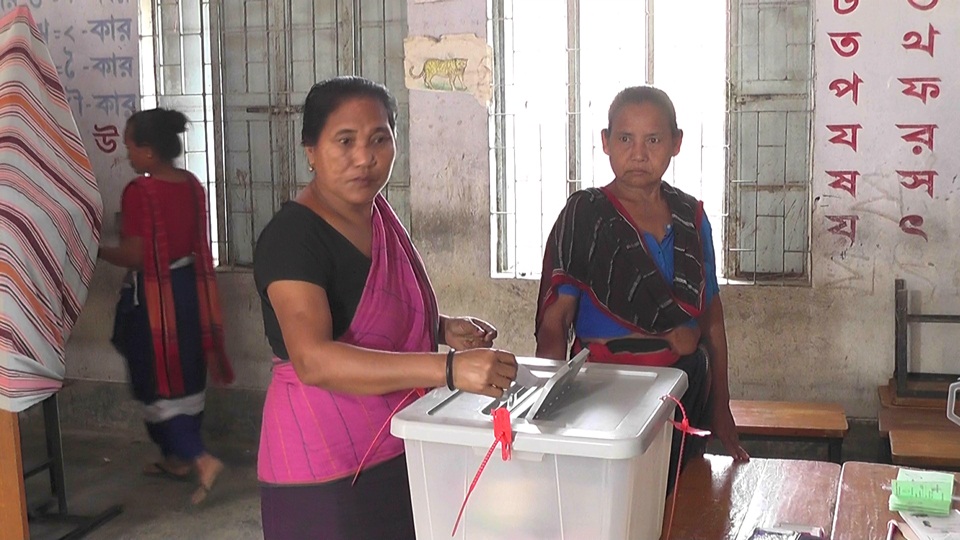 Photo: A voter casts her vote at a polling centre at Rangamati on Monday, March 18, 2019.

Dhaka, Mar 18 : Voting in the  second phase of elections to 116 upazilas in 16 districts began on Monday morning.

The voting began at 8am and will continue till 4pm without any break.

A total of 377 chairman, 548 vice-chairman and 400 woman vice-chairman candidates are contesting the elections in the 116 upazilas where there are some 17,909,006 voters under 7,039 polling stations in 116 upazilas of 16 districts, including Thakurgaon, Rangpur, Gaibandha, Dinajpur, Bogura, Naogaon, Pabna, Sylhet, Moulvibazar, Gopalganj, Faridpur, Chattogram, Rangamati, Khagrachhari, Bandarban and Cox’s Bazar.

Besides, 23 chairman, 13 vice-chairman and 12 woman vice-chairman contestants have already been elected uncontested in the absence of any valid candidate to oppose them.

A large number of security members, including police, Rab, BGB and Coast Guard, have been deployed in the election areas since Saturday. They are slated to remain so till Wednesday.

Besides, a judicial magistrate was deployed in each upazila and an executive magistrate for every three union parishads for the five days to punish any violator of the polls code.

A security team comprising of 14-16 members drawn from police, Ansar and VDP will guard each polling station on the day.

The Public Administration announced a public holiday in the 116 upazilas for Monday.

The 4th upazila election was arranged in six phases after the 10th parliamentary elections were held in January 2014.