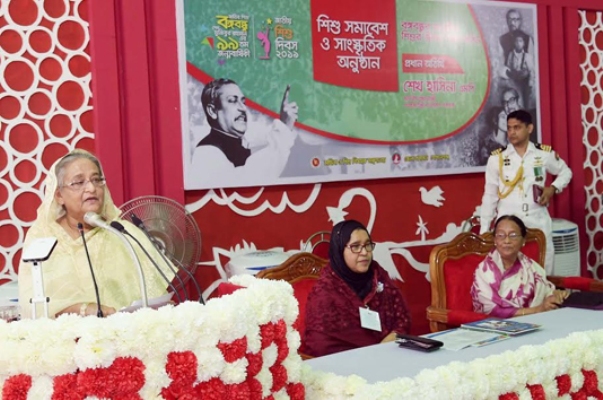 Prime Minister Sheikh Hasina on Sunday reiterated her firm commitment to give a ‘bright future’ to the children by building Bangladesh as a developed and prosperous one freeing from hunger, poverty and illiteracy.
“We have been working with a target to give the children a bright future and shining day in future by building Bangladesh a developed and prosperous country as dreamt by Father of the Nation Bangabandhu Sheikh Mujibur Rahman,” she said.

The prime minister said this while addressing a Children’s Rally and Cultural Programme as the chief guest marking the 99th birthday of Father of the Nation Bangabandhu Sheikh Mujibur Rahman and National Children’s Day on Bangabandhu Mausoleum Complex premises at Tungipara in Goplaganj.

“We have to take steps to present our children a healthy life and ensure their peaceful stay with their parents,” she said, urging everybody to give special attention to their children.

Expressing her commitment to serve the people until the last day of her life, she said that she has a desire to turn the country into a suitable abode for the next generation.

The English lines could be read out as: “I will leave, but I will clear the odds with all my efforts as long as I’m alive. I will make the earth livable for the children; it’s my firm commitment to a new born”.

Highlighting the contribution of the Father of the Nation, the premier said that Bangabandhu had got time only three and a half years and by this time he rebuilt the war ravaged country and shaped Bangladesh as an independent nation.

She mentioned Bangladesh would successfully celebrate the birth centenary of the Father of the Nation in 2020 and golden jubilee of the Independence in 2021.

Sheikh Hasina added: “Inshallah, we would be able to build Bangladesh as a hunger and poverty free country”.

The prime minister said Bangladesh will go ahead with the ideals of the Father of the Nation who dreamt for a hunger and poverty free country as children of present time would turn the dream of Bangabandhu into reality.

She urged the children to study attentively and take advantages and facilities provided by the government for the education to build them as worthy citizens.

The Ministry of Women and Children Affairs and Gopalganj district administration jointly organized the rally of schoolchildren of different educational institutions in Tungipara, the birthplace of Bangabandhu.

the function as the special guest.

Sheikh Hasina received a replica of the logo of Branding of Gopalganj District from the deputy commissioner and unveiled the cover of a book on the letters written for Bangabandhu titled “Bangabandhuke Lekha Chithi.”

The best letter written to Bangabandhu was also read out by a class 10 student Suraiya Yasmin at the function.

A video titled “Amar Kotha Shono” was screened on the occasion.

The prime minister also opened a book fair and visited a painting exhibition of the children on “Bangabandhu and Bangladesh”.

The premier also distributed prizes among the children who participated in literary and cultural competitions organized by Gopalganj district administration marking the 99th birth anniversary of Father of the Nation and the National Children’s Day.

She also took part in a photo session with the children and witnessed a cultural program performed by the children.