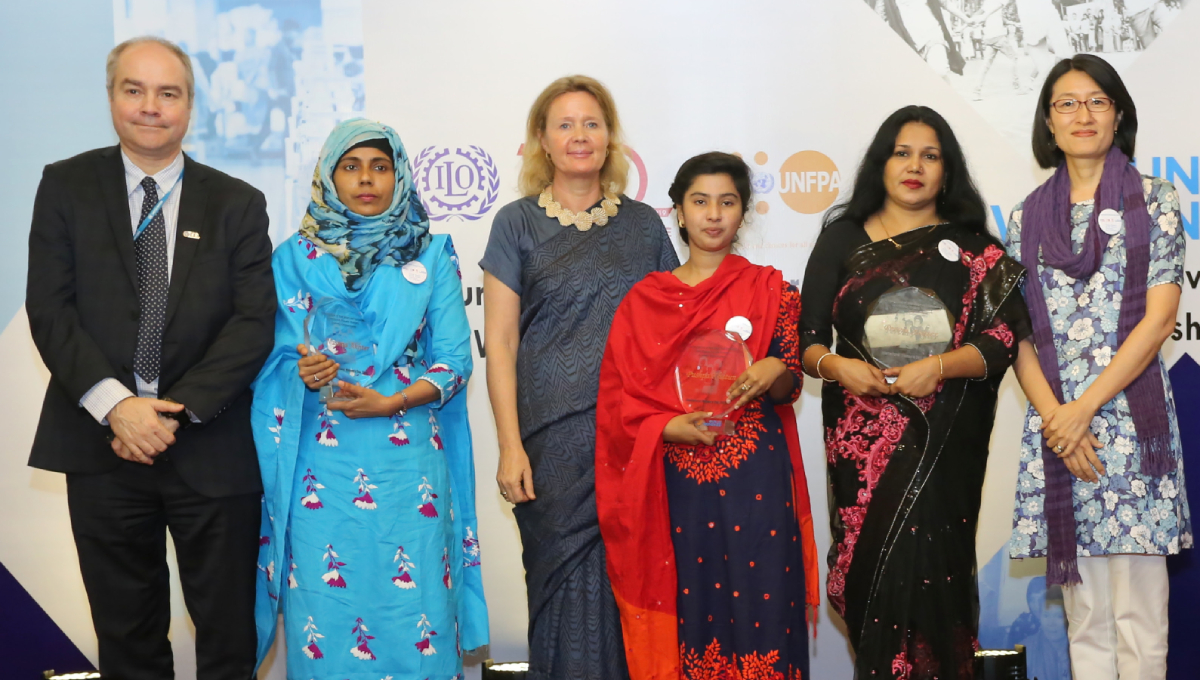 Dhaka, Mar 14 : The UN has honoured three Bangladeshi women who defied tradition, challenged gender stereotypes and social barriers put in front of them because they are women.

They became a successful community activist, an entrepreneur and an employee in a non-traditional sector, empowering many others on the way.

At an event hosted by the ILO, UN Women and UNFPA on Thursday, Pushpa Khatun (19), Parvin Akhter (33) and Nasima Akhter (37) received the recognition award from the Country Heads of the respective UN agencies.

The fearless journeys of Pushpa, Parveen and Nasima to transform their lives and that of others resonate with this year’s International Women’s Day theme – ‘Think Equal, Build Smart, Innovate for Change’.

As a member of the UNFPA-supported Nari Nirjaton Protirodh Committee and community activist in Bogura, Pushpa Khatun has stopped 13 child marriages, including her own, and provided support to eight victims of domestic violence.

She said, “I saw my friends who fall victim to child marriage and saw how it ruined their dreams and aspirations while affecting their physical and mental wellbeing. I didn’t want to be one of them and neither do I want it to happen to others. So here I’m today, doing what I believe in the most – no girl deserves to be a victim of child marriage and no woman should face gender-based violence.”

Parvin Akthar was forced into early marriage when she was in school.

But with training and seed funding from the UN, she was able to attract financing from a private bank against her business plan. She now runs a small textile factory which employs poor women and caters to Dhaka and UK based clients.

She has introduced flexible work hours and a child care facility in her factory to ensure a women-friendly workplace, and also provides sexual harassment training for all her workers.

Another awardee, Nasima Akhter, was an overseas worker who returned home and took a vocational course in electronics.

Nasima is currently employed as a quality controller at an international appliance company.

Her job as a technician is considered to be a non-traditional career for women, but it provides for her son’s education.

Nasima says, “I felt lucky to have received skills training at an ‘older’ age. My dream is to be a supervisor in the production floor of this factory.”

Around 31 million women in Bangladesh are not engaged in education, employment or training according to labour force data.

Addressing this issue, Country Director of ILO Bangladesh Tuomo Poutiainen said women face multiple challenges in attaining quality education and in finding decent employment. “The ILO, through its skills development programme in Bangladesh, is creating opportunities for women of all ages to access vocational education and training and find job placement.”

“We have to create an environment where women can thrive as entrepreneurs by removing structural barriers such as gender-bias that banks have towards financing women’s businesses and increasing government investment in women-friendly public services such as child care that would free up women’s time,” said Shoko Ishikawa, Country Representative, UN Women.

Speaking at the event, UNFPA Representative Dr Asa Torkelsson said, “Clearly, women’s access to reproductive health has been a game changer for women’s economic empowerment across the world, and in Bangladesh too.”

Government officials, diplomats and representatives from UN agencies, development partners, civil society, the private sector, employers’ and workers’ organisations attended the programme which started with a panel discussion followed by a cultural event.