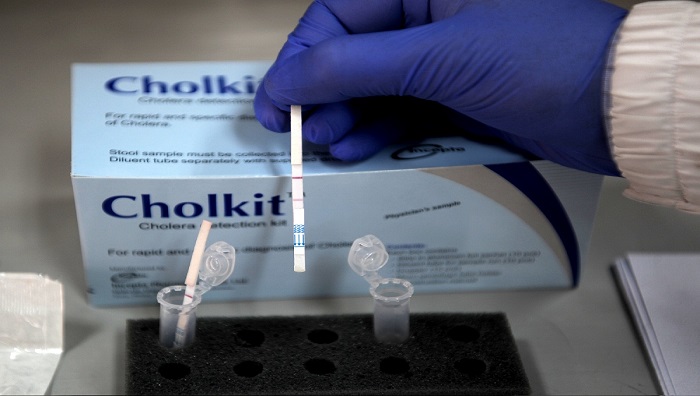 Scientists at the icddr,b has developed a locally-made low-cost dipstick device, Cholkit, for rapid and effective diagnosis of cholera in Bangladesh and beyond.

Incepta Pharmaceuticals is the lone partner of this unique development.

Generating new hopes of better management of the disease, the rapid diagnostic test (RDT) has successfully met requirements and guidelines for such tests, which are capable of detecting Vibrio cholerae from stools, icddr,b said in a press release.

Cholkit is an immunochromatographic test device – a dipstick that is dipped into a tube with stool specimen and provides qualitative result (coloured band) readable by the naked eye within a maximum of 15 minutes’ time.

A field evaluation of Cholkit has recently been published in the scientific journal PLOS Neglected Tropical Diseases, said Dr Firdausi Qadri, a scientist in the Infectious Diseases Division at icddr,b who led the development of Cholkit.

“It showed that the sensitivity and specificity of Cholkit is similar to the commercially available RDTs, when used in field settings for detecting V. cholerae from stool specimens,” she said.

A total of 7,720 stool samples were tested during the evaluation where Cholkit has shown sensitivity of 76 percent and specificity of over 90 percent while other RDTs showed around 72 percent and 86.8 percent respectively.

The gold standard for detecting cholera is laboratory confirmation by stool culture, which is sensitive to several factors, including the quality of sampling, delays in shipment, laboratory equipment, skilled human resources, time (24 to 72 hours) and cost (6 to 8 US dollar/sample), the release added.

“From the public health perspective, the management of cholera outbreaks needs immediate detection as the pathogen has immense potential to spread and cause epidemics in a short period of time. Thus, the need for simple and easy to use RDTs which are quickly interpretable, require simple storage facilities, and are reasonably priced is a clear choice. It has the potential to be used at the primary health care level for cholera surveillance, for early outbreak detection and as a tool for an initial alert for monitoring of seasonal peaks in highly endemic areas and in peripheral health care facilities,” read the release.

Cholera is an ancient disease. Globally, an estimated 1.3 billion people are at risk of this disease, with South Asia, constituting the largest share.

In Bangladesh, at least 66 million people are at risk of cholera, with nearly 110,000 cases reported annually with many more mild and asymptomatic cases in the community.

The disease is primarily caused by a pathogen called V. cholerae, which has over 200 serotypes.

“Historically, all seven cholera pandemics have originated from this part of the world. Management of cholera outbreaks depends on early detection of cholera cases. Presently, in addition to the laboratory culture of stool samples, imported rapid diagnostic test kits are being used for cholera detection,” said the scientist.

“Now, Bangladesh has a locally-produced RDT Cholkit with the potential to reduce import dependency and potential to create new avenues for export to other endemic countries in the future,” she said.

Thus, Bangladesh will have completed locally-produced cholera preventions tools – a vaccine and a rapid diagnostic test to combat this ancient disease, she added.

The Incepta produced Cholkit is now being used in 22 cholera sentinel surveillance sites across Bangladesh which are managed jointly by icddr,b and Institute of Epidemiology Disease Control And Research (IEDCR).