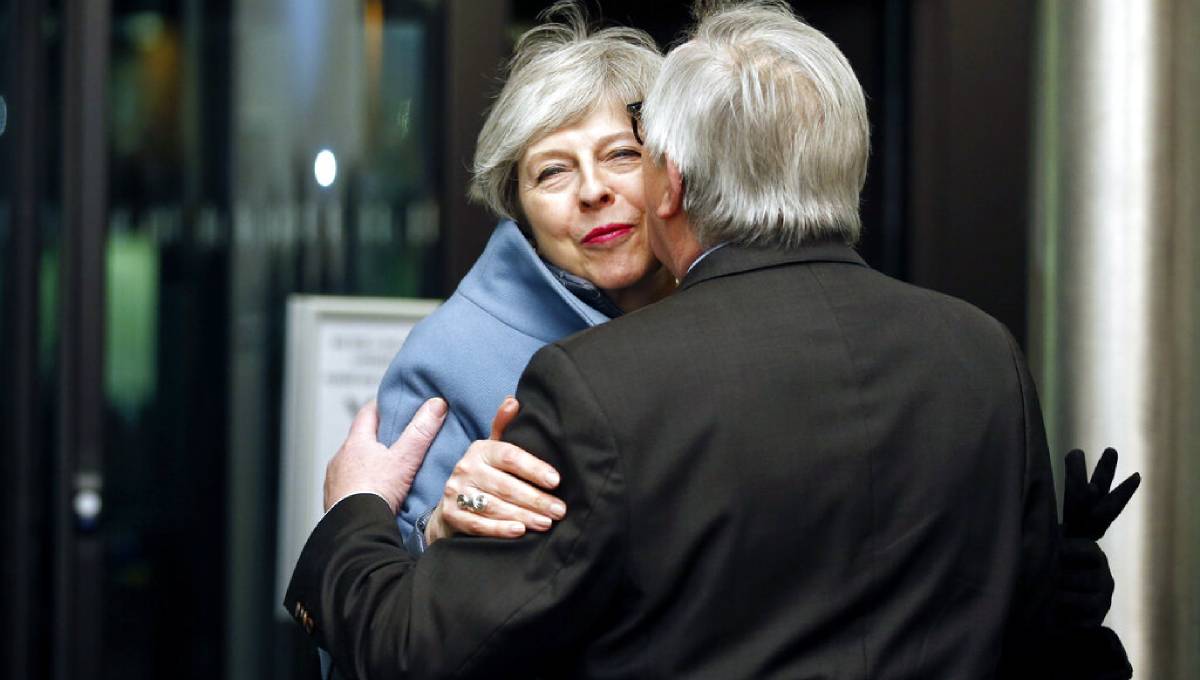 Strasbourg, Mar 12 : Britain and the European Union emerged from last-minute talks late Monday to announce they had finally removed the biggest roadblock to their Brexit divorce deal, only hours before the U.K. Parliament was due to decide the fate of Prime Minister Theresa May’s hard-won plan to leave the EU.

On the eve of Tuesday’s vote in London, May flew to Strasbourg, France, to seek revisions, guarantees or other changes from European Commission President Jean-Claude Juncker that would persuade reluctant British legislators to back her withdrawal agreement with the EU, which they resoundingly rejected in January.

At a joint news conference, May and Juncker claimed to have succeeded.

May said new documents to be added to the deal provided “legally binding changes” to the part relating to the Irish border. The legal 585-page withdrawal agreement itself though was left intact.

“In politics, sometimes you get a second chance. It is what you do with this second chance that counts. Because there will be no third chance,” Juncker warned the legislators who will vote late Tuesday.

“Let’s be crystal clear about the choice: it is this deal or Brexit might not happen at all,” he said.

May said the changes should overcome lawmakers’ qualms about a mechanism in the deal designed to keep an open border between Britain’s Northern Ireland and EU member Ireland. The mechanism, known as the backstop, is a safeguard that would keep the U.K. in a customs union with the EU until a permanent new trading relationship is in place.

Brexit-supporters in Britain fear the backstop could be used to bind the country to EU regulations indefinitely.

May said the new wording “will guarantee that the EU cannot act with the intent of applying the backstop indefinitely.”

“Now is the time to come together to back this improved Brexit deal and deliver on the instruction of the British people,” she said.

But the changes appear to fall well short of Brexiteers’ demands for a unilateral British exit mechanism from the backstop.

Pro-Brexit U.K. lawmakers said they would read the fine print and wait for the judgment of Britain’s attorney general before deciding how to vote on Tuesday.

Announcing the breakthrough in Britain’s House of Commons, Cabinet Office Minister David Lidington said lawmakers faced “a fundamental choice … to vote for the improved deal or to plunge this country into a political crisis.”

And Juncker warned Britain “there will be no new negotiations” if lawmakers rejected the deal again.

Britain is due to pull out of the EU in less than three weeks, on March 29, but the government has not been able to win parliamentary approval for its agreement with the bloc on withdrawal terms and future relations. The impasse has raised fears of a chaotic “no-deal” Brexit that could mean major disruption for businesses and people in Britain and the 27 remaining EU countries.

“This is a government in chaos, with a country in chaos because of this mess,” Labour Party leader Jeremy Corbyn said.

May has staked her political reputation on securing an exit deal with the EU and is under mounting pressure to quit if it is defeated again. She survived a bid to oust her through a no-confidence vote in December. As a result, she cannot be forced from office for a year.

The EU is frustrated at what it sees as the inability of Britain’s weak and divided government to lay out a clear vision for Brexit. It is irritated, too, that Britain is seeking changes to an agreement that May herself helped negotiate and approve.

May has been working frantically to save her deal, speaking by phone to eight EU national leaders since Friday, including French President Emmanuel Macron and German Chancellor Angela Merkel.

If Parliament throws out May’s deal again on Tuesday, lawmakers will vote over the following two days on whether to leave the EU without an agreement — an idea likely to be rejected — or to ask the EU to delay Brexit beyond the scheduled March 29 departure date.

“It would be very difficult for the prime minister to stay in office for very much longer,” Morgan told the BBC.

Alan Wager, a Brexit expert at the U.K. in a Changing Europe think tank, said Parliament this week could decisively rule out both May’s deal and a no-deal departure.

That, in turn, would make such options as a new Brexit referendum or a “softer” withdrawal from the EU lot more likely, he said.

“Finally, the House of Commons is going to have to make a final judgment on what it wants in terms of Brexit,” he said.