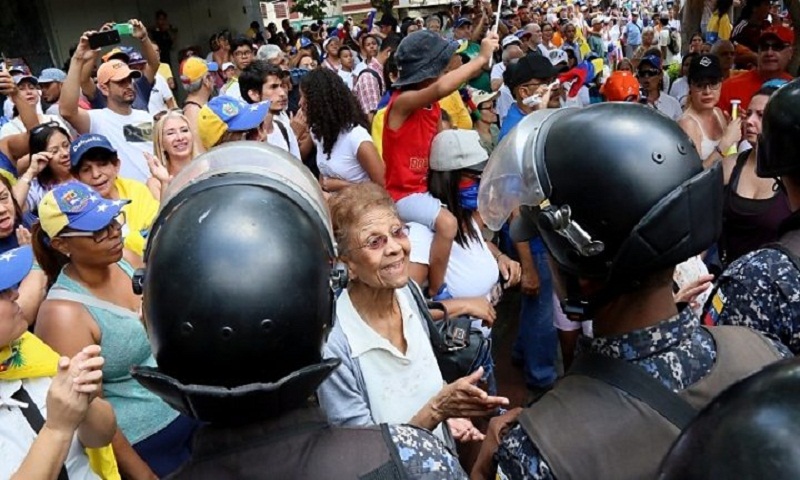 Rival demonstrations are taking place in Venezuela in response to calls by opposition leader Juan Guaidó and President Nicolás Maduro.
In the capital Caracas, some supporters of Mr Guaidó scuffled with police and were driven back with pepper spray.Mr Guaidó declared himself interim president on 23 January and has been at loggerheads with Mr Maduro ever since.

Saturday’s protests follow widespread power cuts that have affected much of Venezuela since Thursday.

Mr Guaidó, who leads the opposition-controlled National Assembly, has been recognised as interim president by more than 50 countries. However, Mr Maduro retains the support of the military and close allies including Russia and China.

What is the latest?

On Saturday, police were out in force where the opposition march was taking place in Caracas.

Some protesters pushed against police in riot gear shouting “murderers” and the officers responded by firing pepper spray at them.President Maduro, meanwhile, thanked the army for staying loyal to him, saying they had defeated an attempted opposition coup.

President Maduro has accused Mr Guaidó of trying to mount a coup against him with the help of “US imperialists”.

What happened with the power cuts?

The widespread power cuts have reportedly been caused by problems at the Guri hydroelectric plant in Bolivar state – one of the largest such facilities in Latin America.

A fresh blackout struck on Saturday, El Nacional newspaper reported, cutting power to many areas where it had previously been restored.

In Caracas, traffic lights in some areas were back in action but the city’s metro remained closed, reports said.

Venezuela depends on its vast hydroelectric infrastructure, rather than its oil reserves, for its domestic electricity supply. But decades of underinvestment have damaged the major dams, and sporadic blackouts are commonplace.

President Maduro said on Saturday that electrical substations had been attacked with “the support and assistance of the US”.

“Many saboteurs have infiltrated the state’s electrical company,” he said.