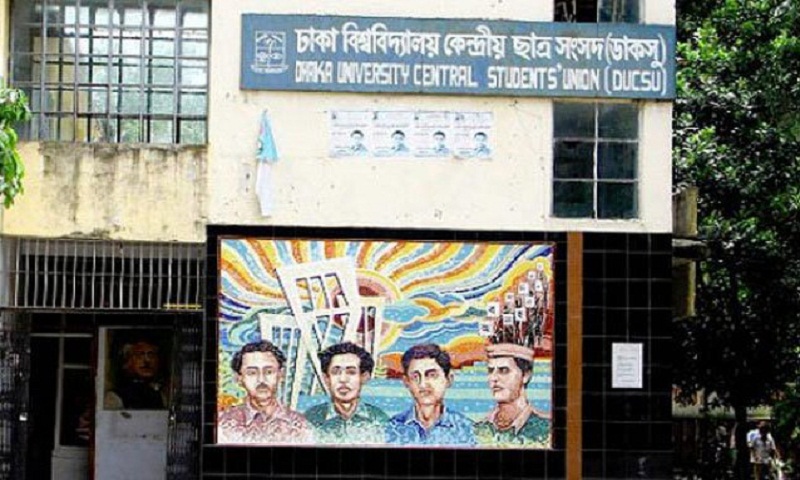 Ahead of the election of DUCSU, which is considered as the breeding ground of politics, the DU campus is teeming with the leaders and activists of all student organisations.

The DU authorities have already chalked out necessary steps to ensure a free and fair election, which is seemed to be a competitive one.

DU administration is also taking all out measures to hold the polls at 18 residential halls on the campus.

DU Proctor Professor golam Rabbani said that though the classes and examinations will remain closed, the other activities of the university will run spontaneously on the polling day.

“The university buses will ply normally so that the non-residential students can easily come to their campus to exercise their franchise,” DU Proctor added.

Dhaka Metropolitan Police (DMP) imposed a restriction on the movement of outsiders and vehicles on DU campus for 24 hours from 6 pm on Sunday for the polls.

Law enforcement agencies will inspect all at seven entry points of university campus to ensure security and to provide safety of voters, DMP commissioner Asaduzzaman Mia said at a press briefing at Shabagh police station on Saturday.

“All the voting centres during the DUCSU election will be brought under CCTV camera surveillance’, he said.

The authorities will not allow anyone inside the DU campus unless they have valid DU passes or ID cards, Asaduzzaman Miah added.

The authorities have also imposed restrictions on the number of media personnel on the campus during the Ducsu election. Journalists will be given special passes, the DMP commissioner said.

Authorities have also requested Dhaka Medical College Hospital-bound people to use the Bakshibazar-Chankharpool route for going to the hospital.

A total of 229 candidates will vie for the 25 posts of DUCSU, which remained dysfunctional for around 28 years. The last DUCSU and hall union polls were held in 1990.

Each voter having ID card will enter the hall within 2pm and will be allowed to cast his vote.