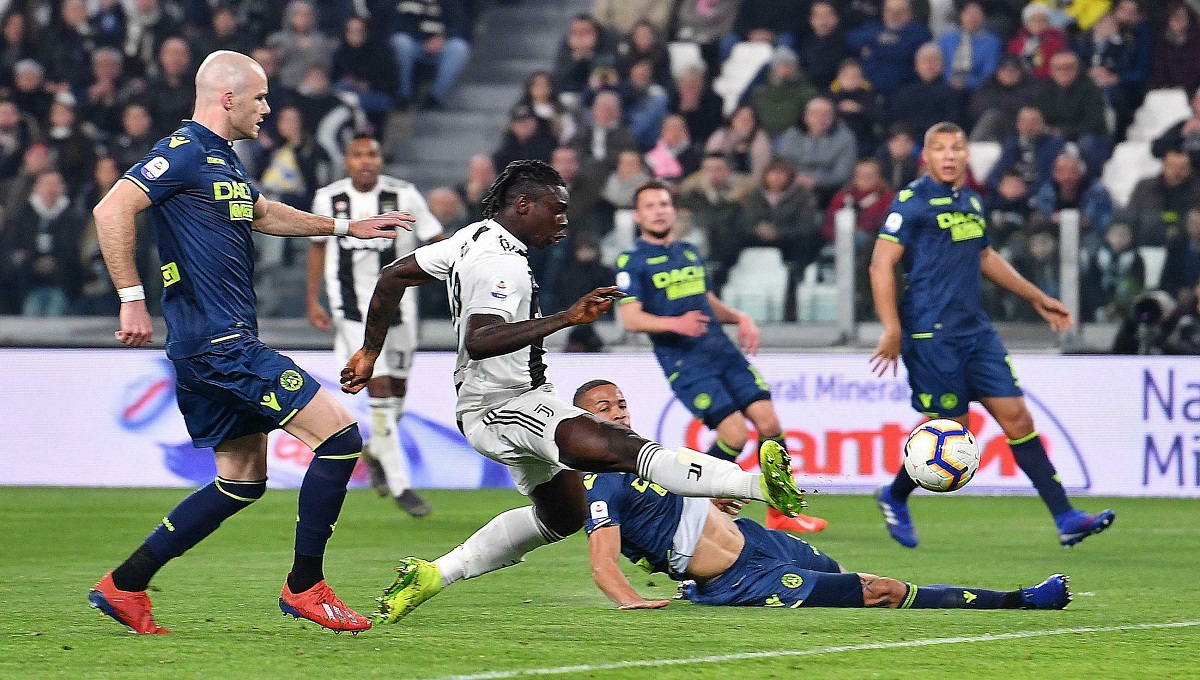 Juventus’ Moise Kean, center, scores a goal during the Italian Serie A soccer match between Juventus FC and Udinese Calcio at the Allianz Stadium in Turin, Italy, Friday, March 8, 2019.

Turin, Mar 9 : Despite resting Cristiano Ronaldo ahead of its crucial Champions League match, Juventus romped to a 4-1 victory over Udinese on Friday with teenager Moise Kean scoring twice.

Kean, who received a standing ovation when he was replaced late, also won a penalty which was converted by Emre Can. Blaise Matuidi added the final goal as Juventus extended its lead in Serie A to 19 points.

With Juventus needing to overturn a 2-0 deficit against Atletico Madrid on Tuesday in their round-of-16, Massimiliano Allegri rested a number of key players.

The 19-year-old Kean was handed his first league start of the season, having played just a handful of minutes in two substitute appearances, and he certainly staked his claim for more time.

“I’m always ready to go when the coach calls me and obviously in every training session as well,” Kean said. “Being at Juve helps me a lot, I’m learning all the time and this is the best place.

“Tonight’s match gives us confidence for Tuesday. From now on we’re only thinking about that game.”

Kean netted his first in the 11th minute by sliding to prod home Alex Sandro’s cross.

He doubled his tally shortly before halftime, showing a fantastic burst of pace and feinting as if to cross before beating the goalkeeper at the near post.

The goal brought Ronaldo and Paulo Dybala, who were on the substitutes’ bench, to their feet in admiration.

Kean almost bagged a hat trick in the second half but was brought down by Nicholas Opoku and Can fired the resulting penalty straight down the middle.

Juventus hadn’t scored more than three goals in a match this season but it got a fourth in the 71st when Matuidi headed in Rodrigo Bentancur’s cross from the right.