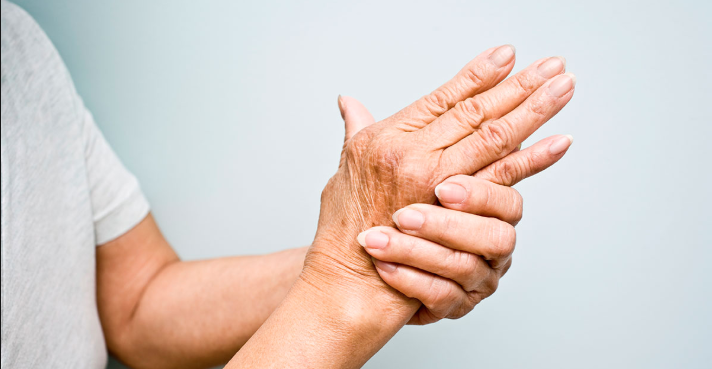 Rheumatoid arthritis (RA) is a chronic systemic autoimmune inflammatory disorder of the joints. The condition begins insidiously with nonspecific aches and pains in the musculoskeletal system of the body that come-and-go.

The symptoms progress over a period of time, within weeks or even some months when actual joint swellings become visible along with increasing stiffness and pains. approximately 1 in 100 people may be suffering from RA in the community. The condition usually occurs in people between 20 years to 60 years of age.

RA affects small and large joints in the arms and the legs in a symmetrical distribution (on both sides of the body).

This is in contrast to the other very common joint disease (of elderly persons) called osteoarthritis.

Osteoarthritis usually begins at a later age and most commonly affects one knee and then the other knee over time.

RA is 5 times more common in women than men.

The exact cause of RA is not known. However, it is well understood that the synovial tissue (the inner lining) of the joints become inflamed due to an autoimmune response (the immune system of the body becomes imbalanced and starts self-attack).

The cause of the autoimmune response is multifactorial including certain genetic risk factors and several environmental factors including smoking, poor oro-dental hygiene.

There are several additional risk factors that enhance the possibility of a poor treatment outcome in RA.

These include obesity, lack of regular exercise and imbalanced diet.

Eating plenty of fruits, green vegetables, and a balanced high-fibre diet helps in the control of RA

Signs and symptoms of rheumatoid arthritis you should know

The main symptoms of RA are morning stiffness (stiffness after a period of rest that may take 30 minutes to an hour before improving), pain and swelling in the small joints of the hands-fingers. But, almost all the other small and large joints in the body may get affected including wrists, elbows, shoulders, the knees, the ankles and the joints in the feet, in a symmetrical distribution.

However, spine involvement does not occur in RA (except in the upper neck) as also the hip involvement that is uncommon. Symptoms of RA are characterised by persistence (persists beyond 6 weeks), therefore, it is characterised as a form of chronic inflammatory arthritis)

A person suffering from RA is likely to wake up with stiff joints in the morning.

They experience severe pain in different joints of the body like joints of hands, wrists, elbows, foot and ankle joints.

They also experience visible swelling in these joints.

These people find it difficult to perform day-to-day activities

No alternative to skilled manpower to face global challenges: Speaker

WHO: Monkeypox to be renamed mpox

7.1 million Bangladeshis displaced by climate change in 2022: WHO