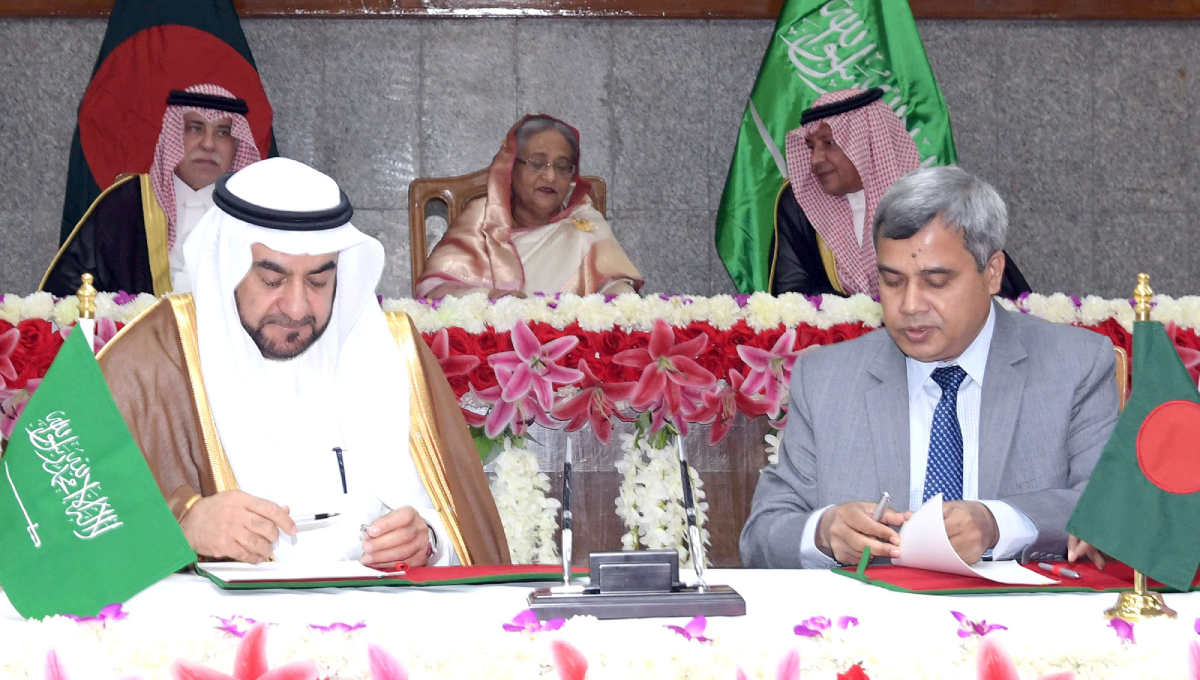 Dhaka, Mar 7 : Bangladesh and the Kingdom of Saudi Arabia (KSA) on Thursday signed two agreements and four MoUs for the development of various sectors of Bangladesh including power, and industrial sectors.

The instruments are – an agreement on construction of 100-megawatt solar IPP; an agreement on manufacturing transformer and electricity devices; MoU on setting up of urea formaldehyde-85 plant; MoU on establishing Saudi-Bangladesh Institute of Biomedical Engineering and Technology; MoU on manufacturing cables and MoU on manpower export was signed by BMET of Bangladesh and Al Maml Trading Estate of Saudi Arabia.

The agreement on construction of 100 megawatts of solar IPP was signed between Electricity Generation Company of Bangladesh Limited and Alfanar Company of Saudi Arab.

The agreement on manufacturing transformers and electricity devices was signed between General Electric Manufacturing Company Limited and Engineering Dimension.

The Saudi Minister said his country is serious in enhancing business ties with Bangladesh.

He made the remarks while addressing a plenary session of the joint ministerial level meeting with Bangladesh on investment held at a city hotel.

The Saudi delegation that arrived on Wednesday night is scheduled to leave here for Riyadh on Thursday night.

Finance Minister AHM Mustafa Kamal led the Bangladesh side at the Bangladesh-Saudi Arabia bilateral meeting being held with special focus on investment.

The relations between Bangladesh and Saudi Arabia have reached a new height in recent time by consecutive four successful visits of Prime Minister Sheikh Hasina to Saudi Arabia in the last three years, officials said.

During her meetings with Saudi leadership, it was identified that despite having huge potentials, the two countries are far behind in exploring the opportunities for cooperating in the field of trade and investment, they said.

During the last visit of the Prime Minister to the Kingdom of Saudi Arabia in October last year, the focus was on expanding cooperation in the field of investment.

The MoUs were inked after the meeting of Prime Minister Sheikh Hasina with the Saudi business community, including leaders of the Council of Saudi Chamber and Riyadh Chamber of Commerce, at King Saud Palace.