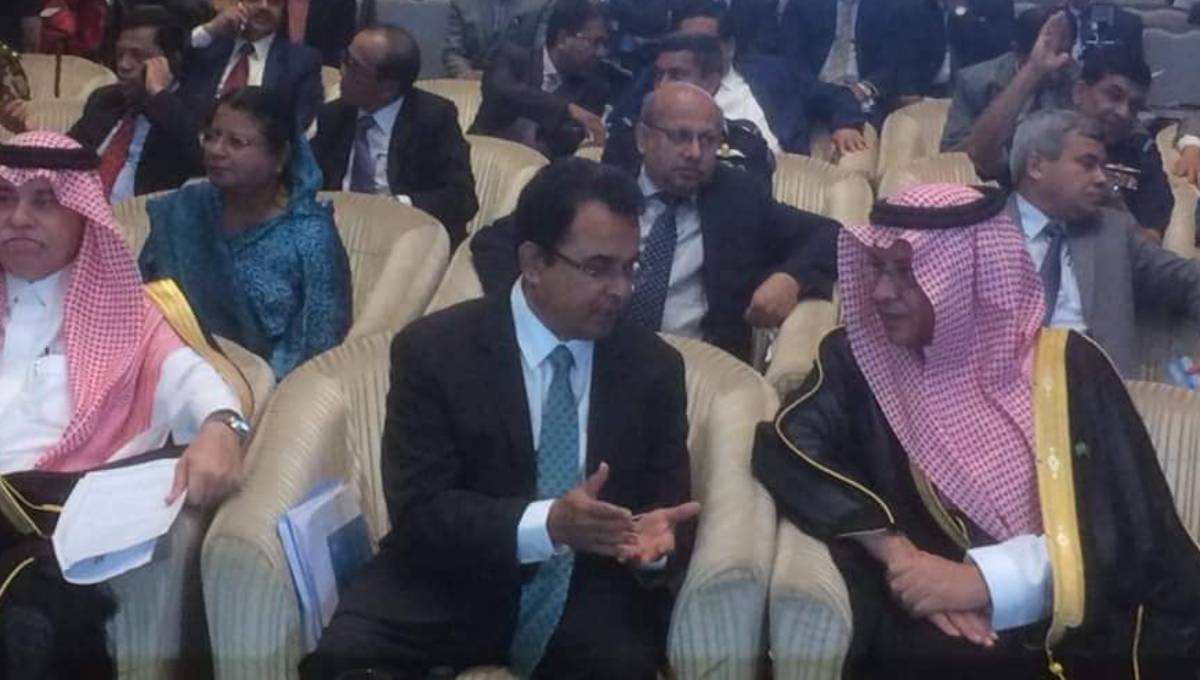 Finance Minister AHM Mustafa Kamal and two Saudi ministers in a a plenary session of the joint ministerial level meeting with Bangladesh on investment held at a city hotel. Photo: Courtesy

The Saudi Minister said his country is serious in enhancing business ties with Bangladesh.

“We are here to support… we are here to work, identify scopes, listen and open the highway of dialogue between the two countries,” he said.

He made remarks while addressing a plenary session of the joint ministerial level meeting with Bangladesh on investment held at a city hotel.

Bangladesh and Saudi Arabia are now in a discussion as the oil-rich kingdom is keen to invest in potential areas, including infrastructure and energy sector.

Finance Minister AHM Mustafa Kamal is leading the Bangladesh side at the Bangladesh-Saudi Arabia bilateral meeting being held with special focus on investment.

The Foreign Minister on Tuesday hoped that the high-profile Saudi delegation will come up with a big investment package during the visit. “We’ll let them know about the potential areas of investment. I believe, the outcome will be very good.”

The relations between Bangladesh and Saudi Arabia have reached a new height in recent time by consecutive four successful visits of Prime Minister Sheikh Hasina to Saudi Arabia in the last three years, officials said.

During her meetings with Saudi leadership, it was identified that despite having huge potentials, the two countries are far behind in exploring the opportunities for cooperating in the field of trade and investment, they said.

During the last visit of the Prime Minister to the Kingdom of Saudi Arabia in October last year, the focus was on expanding cooperation in the field of investment.

The MoUs were inked after the meeting of Prime Minister Sheikh Hasina with the Saudi business community, including leaders of the Council of Saudi Chamber and Riyadh Chamber of Commerce, at King Saud Palac.

Judges among 10 injured as lift collapses at Dhaka Court