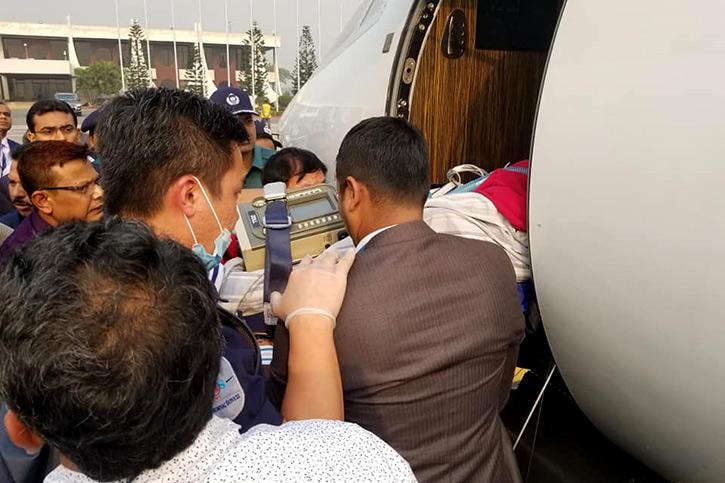 Ailing Awami League (AL) General Secretary and Road Transport and Bridges Minister Obaidul Quader is likely to undergo a bypass surgery at Mount Elizabeth Hospital in Singapore where he is now being treated, said a Bangladeshi physician on Tuesday.

“He (Quader) is likely to undergo a bypass surgery at Mount Elizabeth Hospital here ‘within days’,” Bangabandhu Sheikh Mujib Medical University (BSMMU) Director Dr Abu Naser Rizvi, who is staying beside the ailing politician in Singapore, informed in a video clip.

He said Mount Elizabeth Hospital doctors found infections in his kidneys and he could be fit for the surgery once the infections were contained.

“They (doctors) are thinking to carry out a bypass surgery in his heart after controlling the infections . . . his condition, however, is stable now and gradually improving,” Rizvi said.

A medical board constituted with Dr Philip Koh, a senior consultant of cardiology department of the hospital, as its head examined him on Tuesday morning (BST) and briefed about the treatment.

He said the medical board extensively examined Quader and sat with them on Tuesday morning and gave their feedback.

Dr Rizvi said the minister’s condition is on the mend.

He also said the medical board appreciated the initial management of the situation in Bangladesh.

The medical board will brief on the treatment on Wednesday noon, local time.

Meanwhile, Additional Secretary Belayet Hossain of the Road Transport and Highways Division here said the condition of ailing minister Obaidul Quader has improved and the medical team of Mount Elizabeth Hospital in Singapore examined him around 10am (BST), said an official here.

After the checkup, doctors informed that his condition is now good, he said.

It will decide about the tests to be conducted on him, Belayet said, adding that a CT scan will be done today.

Qauder is now under the supervision of Dr Philip Koh, a senior consultant of cardiology department of the hospital, he said.

The minister was flown to Singapore on Monday for better treatment following the advice of renowned Indian cardiologist Dr Devi Shetty.

He was admitted to the CCU of Bangabandhu Sheikh Mujib Medical University in the capital on Sunday morning following his breathing complications.