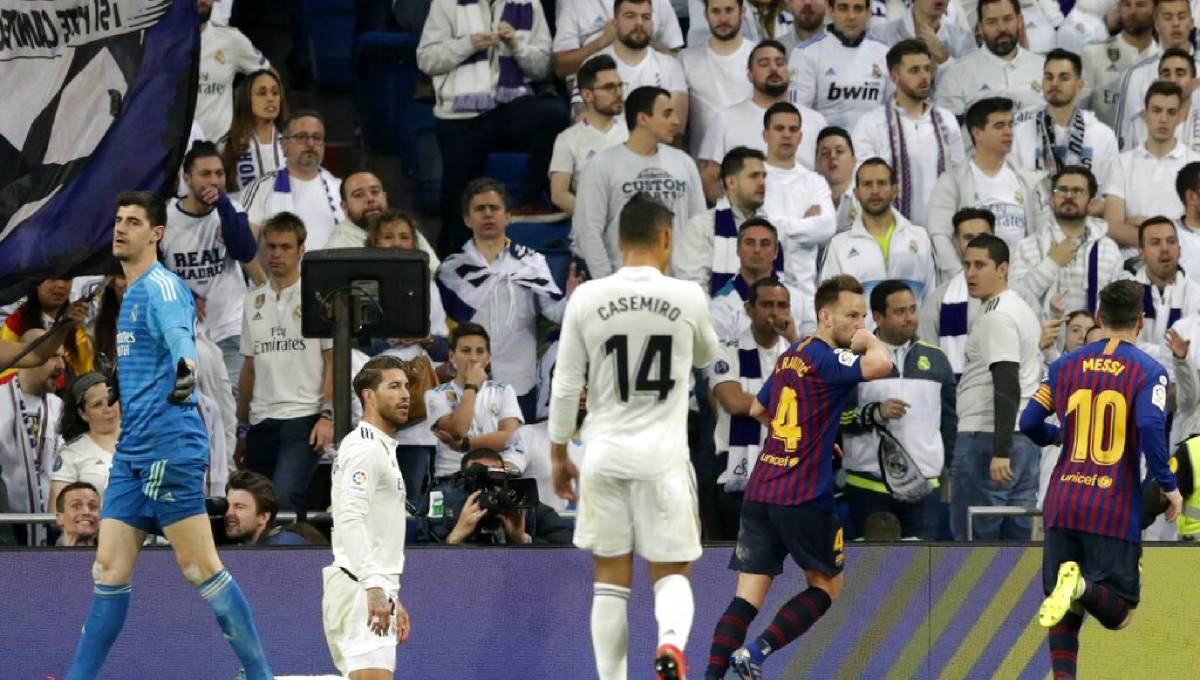 Photo: Barcelona midfielder Ivan Rakitic, second left, reacts after scoring the opening of his team during the Spanish La Liga soccer match between Real Madrid and FC Barcelona at the Bernabeu stadium in Madrid, Saturday, March 2, 2019.

Madrid, Mar 3 : With Real Madrid on the ropes in front of its own fans, Barcelona showed no mercy.

The Catalan club threw the knockout punch on Saturday, leaving Madrid reeling from a second consecutive demoralizing home loss by its biggest rival in less than a week.

Three days after winning 3-0 at Santiago Bernabeu Stadium in the semifinals of the Copa del Rey, Barcelona followed up by defeating Madrid 1-0 to virtually end its hopes of winning the Spanish league title.

Ivan Rakitic scored in the first half and Barcelona held on for its third straight victory at the Bernabeu.

Barcelona, which has also now become the first team to win four in a row at the Bernabeu in the league, is 12 points ahead of Madrid with 12 matches left. The defending champions are 10 points in front of second-place Atletico Madrid, which visits Real Sociedad on Sunday.

“We are not yet considering Madrid out of the title race,” he said. “Atletico is not our only rival, absolutely not. We all know Madrid is capable of winning several matches in a row and getting back in contention.”

Madrid is in crisis, with the Champions League the only trophy it can win this season. Coach Santiago Solari will be under pressure when his side hosts Ajax on Tuesday to defend a 2-1 first-leg lead in the round of 16.

“We have to see how we can improve,” Solari said. “There is no doubt it’s a significant distance to the lead in the league, but we are not going to give up. We will keep fighting until the end, in the Spanish league and Champions League.”

Barcelona is gunning for three titles — the league, the Copa del Rey and the Champions League — and its players celebrated in front of the away fans after the match, while some Madrid supporters jeered their side at the end.

Madrid is winless against Barcelona in six matches in all competitions, and has lost 11 of 18 matches played against its rival in the Spanish capital.

Barcelona won 3-0 the last time the teams met in the league at the Bernabeu, and routed Madrid 5-1 at Camp Nou Stadium in their first league game this season.

After dominating in the first half on Wednesday only to collapse in the second, Madrid never looked in control on Saturday.

Barcelona created most of the chances and struck in the 26th minute. Sergi Roberto sent a pass behind the Madrid defenders for Rakitic and the midfielder chipped the ball over goalkeeper Thibaut Courtois from inside the area.

Madrid pressed forward after conceding and came close to scoring a few times, but Barcelona kept threatening on the counter.

Lionel Messi was quiet for Barca. His most notable moment came when he and Sergio Ramos squared up before halftime, with the Argentina forward upset at the Madrid captain for leaving his arm high and hitting his face in a challenge.

It was the third meeting between the teams in less than a month. They also drew 1-1 in the first leg of the Copa semifinals at Camp Nou. They can only meet again this season in the Champions League. Barca drew with Lyon 1-1 in its first-leg match in the round of 16.

Wu Lei became the first Chinese player to score in the Spanish league when he struck in Espanyol’s 3-1 win against Valladolid.

Quader to be sent to Singapore for treatment: Hasan Mahmud