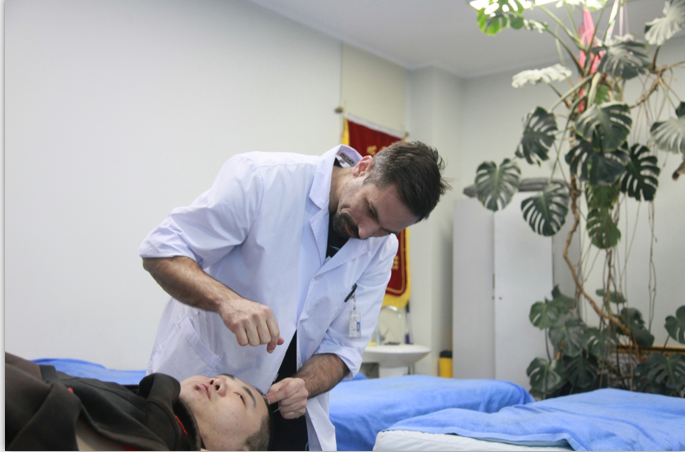 Ivan Susanszky withdraws needles from a patient of acupuncture clinic at the First Hospital Affiliated with the Heilongjiang University of Chinese Medicine, on Feb 12, 2019.

It’s not a usual scene to see a foreigner conducting some Chinese traditional practices like acupuncture in hospitals, but the patients in Harbin of Heilongjiang may get used to it since a foreign intern plans to step into the professional field after graduating this summer.
Ivan Susanszky, 42, a college student from Budapest, Hungary, is an intern at the First Hospital Affiliated with the Heilongjiang University of Chinese Medicine. After graduating in the summer, he will obtain bachelor’s degree in traditional Chinese medicine in acupuncture and tuina (massage) major from the Heilongjiang University of Chinese Medicine in Harbin, capital of Northeast China’s Heilongjiang province.

He started learning traditional Chinese medicine in 2013, in Budapest, taking the course conducted by this Heilongjiang university.

Students of the program study four years in Budapest, then they travel to Harbin to complete their training with a one-year clinical practice, according to the introduction of the course from the university.

He became interested in TCM 2012 after suffering frequent injuries.

“Since I used to play a couple of full contact sports, I often suffered from sports injury and my friend advised me to try a couple of TCM rehabilitation methods,” he said.

“It did relieve my pain, and helped with other injuries as well.”

Besides, Susanszky got bored working as journalist, or rather a critic. His TCM treatment and knowledge about sports medicine, physical therapy and diet lead him to get a TCM degree, a step to get closer to this field.

WHO: Monkeypox to be renamed mpox

7.1 million Bangladeshis displaced by climate change in 2022: WHO